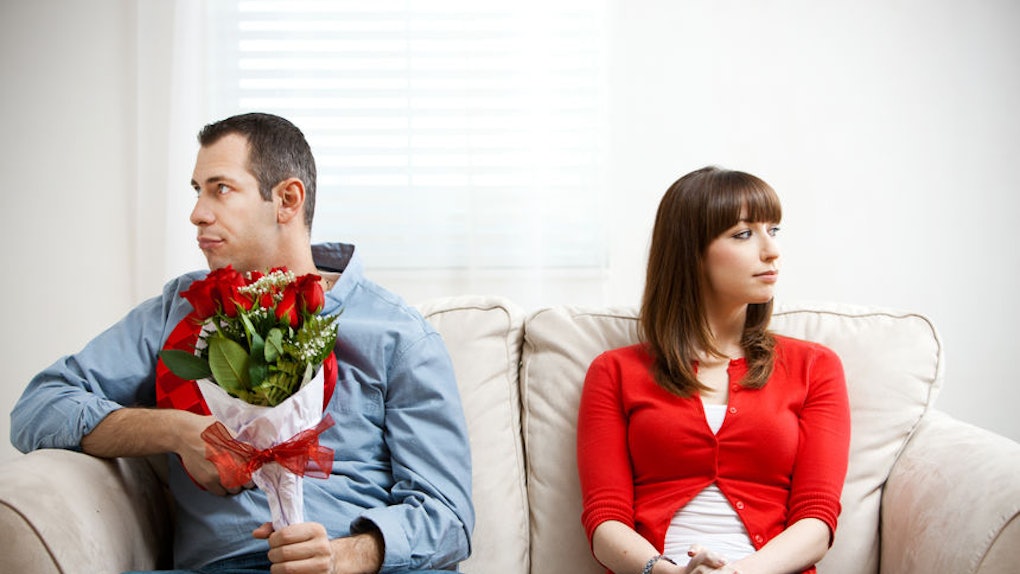 6 Body Language Clues Your Partner Is Lying, According To Experts

Being lied to sucks, plain and simple. Whether it's a friend, a family member, or your significant other, there's a specific feeling of betrayal that comes with someone being dishonest with you. Now, if you're in a relationship, and you're afraid that your significant other isn't telling you the truth, then these body language clues your parter is lying could help out.

The thing is, there's a good chance that you'll deal with moments in your relationship when you feel like your partner isn't being completely honest. It's unfortunate, but it's best if you know. And it isn't always a bad thing. For instance, the two weeks before my fiancé proposed, I had a gut feeling that something was off, and that he wasn't telling me something. Obviously, I was right, but I'm kind of OK with the diamond it resulted in.

While your suspicions might be correct (whatever your partner's lying about), it can't hurt to have some more knowledge on the matter. That's where body language experts come in. Because seriously, the human body is fascinating, and there are actually a lot of clues you can observe in movement and posture that are signs someone is lying. In her book How to Detect Lies, Fraud and Identity Theft, body language expert Traci Brown explains how you can detect dishonesty. "It takes a lot of thinking and energy to lie," she wrote in her book. "That’s the reason body language can be relied on to indicate deception. Words are the easiest to control, much less so for tone and body language."

So, here's what to look out for when you're playing your own lie detector.

1. Their Gestures Are All Over The Place

If you think that your partner is lying to you, look closely as they're speaking. If you think they're lying about, say, why they don't want you to meet their parents, then ask them about it and watch their hand gestures.

2. Their Gestures Don't Match Their Words

Most people shake their heads when they say no, and nod when they say yes. Brown suggests looking to make sure those head gestures match the words they're saying.

"Watch for those occasions when the head movement and words don’t match," she writes in her book. "If that happens, it's a hot spot. This looks natural, but it can signal they don’t believe the words they’re saying."

It might be something small, but if they're nodding yes and saying something that means no, then that might mean something more.

3. They're Not Showing Their Palms

Now, this sounds quite odd, but Brown explains that, "When people flash their palms, they’re telling their truth." Yes, if you're having an arguement with your partner, then watch their hands, because flashing palms indicate the truth.

However, just because someone shows their palms doesn't mean that they're certainly not lying. Brown indicates that what they're saying "may or may not always be the truth, but it's the truth under which they are operating."

4. They're Closing Their Eyes

A pretty important body language sign that your parnter isn't telling the truth is that they'll cover their eyes, close their eyes, or just cover their whole face somehow. If your partner is doing that, "it can be because they don’t want to see the truth," Brown says in her book.

5. They Give A Big Smile

Maybe your partner is an expert at lying. If this is the case, they might exhibit something that Brown describes as "Duper's Delight" in her book. According to Brown, "This is signified by a big smile before answering a potentially very incriminating question."

Basically, they're being charming and coming across as innocent, even if they aren't.

6. They Purse Their Lips

Another example of body language that shows someone is lying is something I am 100 percent guilty of. When I'm embarrassed of the truth or trying to avoid it, I purse my lips. For Brown, this is a sure sign that someone isn't telling the truth.

"Whenever you see people’s lips disappear as they're thinking about how they’re going to answer your question, the next thing out of their mouth will be, at best, a half-truth, possibly a 100 percent lie," she wrote.

Hopefully you never have to worry about whether or not your partner is lying to you. But if you are concerned, then check their body language, because there could be a lot they aren't saying.