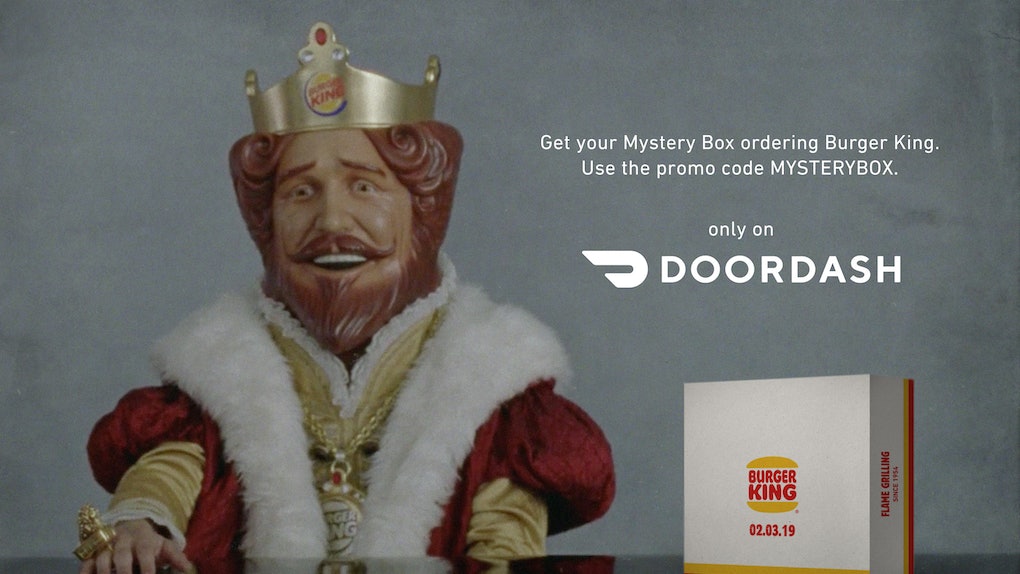 Burger King has a few secrets up its sleeve, everyone. The company announced on Thursday, Jan. 24 that it'll be unveiling a commercial during the Super Bowl — but the contents of that commercial haven't been totally revealed yet. However, the fast food chain made two things clear: The ad will feature its iconic Whopper (aka America's Favorite Burger), and you can order a Mystery Box ahead of its Feb. 3 debut. Now, you're probably wondering how to get Burger King's Super Bowl Mystery Box. Heck, you're probably curious about what's inside of it, too. Luckily, I can tell you how to score one — but I'm not yet sure what the box holds.

In case you're wondering, getting Burger King's mystery box will be simple. According to a Burger King press release emailed to Elite Daily, all you'll have to do is download the DoorDash app and place a Burger King order of $10 or more. Then, type in the promo code "MYSTERYBOX," and wait for your package to arrive in the mail. Per Burger King's press release, the box should come with its own instructions that you can refer to on Super Bowl Sunday. With that being said, make sure you keep your box safe until Feb. 3 — because it sounds like you're going to need it during the game.

This limited-edition Mystery Box creates a unique, engaging and innovative experience, and we are excited to launch it nationwide for our customers.

I don't know about you, but I'm super curious to see what's inside of the Mystery Boxes. I guess I'll have to order one and find out for myself, though.

If you need more convincing before you order a mysterious box alongside your Burger King meal, don't fret. The company partnered with DoorDash and released a video on Jan. 24 that might persuade you to get one. The teaser — which can be viewed here — features the iconic BK "King" encouraging customers to order a Mystery Box through DoorDash. However, the contents of the Mystery Box remain, well, a mystery.

If you decide to order a Mystery Box with your Burger King DoorDash order, you'll probably know what's inside of the box before everyone else does. Just make sure you keep its contents at hand during the big game, because I'm gonna assume that you'll need it when Burger King's 45-second commercial airs on Feb. 3. If you're hoping to make the commercial viewing party (er, I mean, Super Bowl) extra special, why not order a few Whoppers? According to the press release, you can enjoy free delivery fees on Burger King DoorDash orders of at least $10 from Jan. 24 through the day after the big game, aka Feb. 4. Between your Mystery Box, some burgers, and a brand new ad, you'll be getting the full Burger King experience from the comfort of your home.