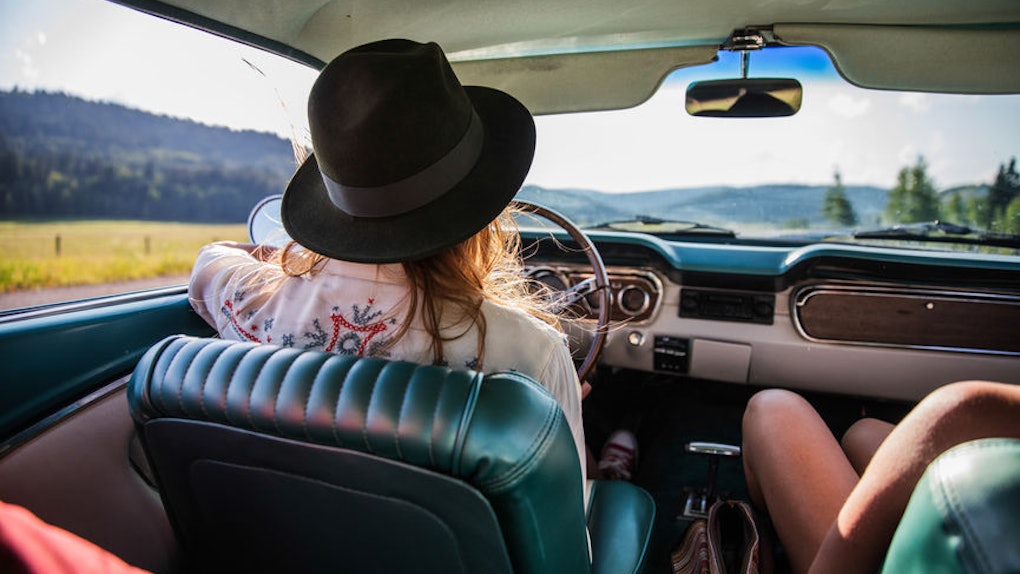 While going on a road trip may seem like a cheaper alternative to jet-setting on a vacay, it can actually be relatively expensive. Between booking places to stay, sightseeing, and — most importantly — paying for gas, traveling by car can rack up a shocking amount of cash. But just in time for the warm weather (aka prime road trip season!), Shell is giving away free gas for an entire year. Yes, you heard that correctly, so here's how to enter Shell's Great Gas Giveaway. IDK about you, but my heart is set on that Grand Prize.

In case you haven't already heard, Shell recently came out with a totally new and improved gas formula. According to the press release, the chain launched its new premium gasoline, Shell V-Power® NiTRO+, on May 20 nationwide. It's apparently specially designed to defend against gunk and anything that could prevent your engine from running seamlessly. IDK much about gasoline, but anything that helps to (hopefully!) keep my car out of the auto repair shop and on the road this summer sounds good to me. And to celebrate the launch of this new gas formula, the fuel giant is giving away free fuel for a year to hundreds of lucky drivers. In all seriousness, this is not an opportunity I'd want to miss out on. And luckily, entering the contest is super easy.

Start out by joining Shell's Fuel Rewards membership. Then, after you've officially joined, all you have to do fill up your tank at any Shell station between May 20 and Sept. 1, 2019, using your Fuel Rewards card or Shell Fuel Rewards Alternate ID. For each fuel purchase you make between those dates, you will automatically be entered to win the Grand Prize of a year's worth of free gas, according to the press release. 28 Grand Prize winners will be drawn every week for 15 weeks, beginning June 6, which means there will be a total of 420 winners. Grand Prize winners will be notified through the email address associated with their Fuel Rewards Program account on a weekly basis. See? It really is that simple.

Like I said, if you're selected to win, you'll be notified by email. Upon getting that highly anticipated email, you will be required to provide your full name and mailing address within five days of getting notified, according to the press release. If a potential winner can't be contacted or the prize is returned as undeliverable, however, you won't get your gas money. So make sure to claim it ASAP.

If you don't end up winning that delectable Grand Prize, though, it's no biggie. According to the press release, there are over 51,000 other prizes you could win, and they still include free gas. The chain is giving out $100 and $50 Shell gift cards to non-Grand Prize winners, who will be notified every three weeks. The money will then be applied to your account within eight weeks.

Anyone who has ever embarked on an extensive road trip with their friends will tell you it's quite an experience, and they definitely teach you a number of important life lessons. You'll quickly learn about the comfort of getting lost, how to find awesome local food, that roadside attractions are everything, and that a solid playlist is crucial. Seriously, it's unlike anything you've ever done before.

Going on a whirlwind of a road trip for the summer is an undeniably enticing concept, but sometimes, exorbitant gas prices make it — well — nearly impossible. But Shell's Great Fuel Giveaway is coming in clutch with free fuel for an entire year. If I end up winning, you can definitely expect a plethora of postcards in your future.

More like this
Here's How To Enter Hotels.com's Tax Write-Off Vacation Giveaway For A Chance At $2,700
By Lara Walsh
Smirnoff's Summer Of 2,021 Dreams Giveaway Includes Free Flights & Bucket List Experiences
By Lara Walsh
This Video Tour Of Disney World Reveals Cool Design Secrets Of The Magic Kingdom
By Lara Walsh
Stay up to date