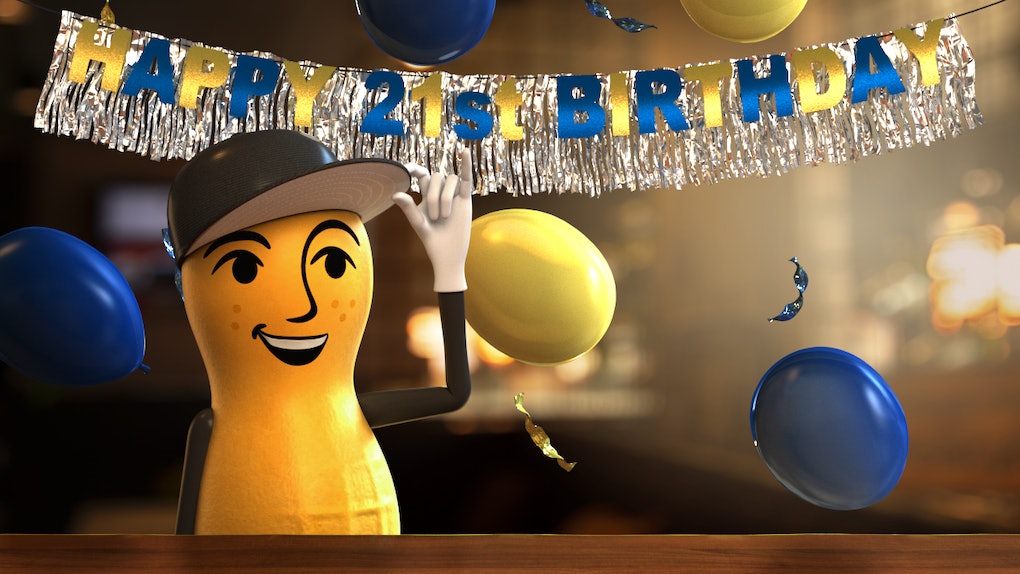 Here's How To Enter Planters' Peanut Jr. Birthday Sweepstakes For A Chance At A Big Payday

Baby Nut made his official debut as the Planters mascot just six months ago, but in the year of 2020 anything can happen. And that "anything" in the case of Baby Nut — who was revealed in a Super Bowl commercial on Feb. 20 — is that he's already turning 21 years old. I know, time really flies. But the best part of this surprising announcement is that you can cash in on it. If you're ready for a big payday, check out how to enter Planters' Peanut Jr. Birthday Sweepstakes.

Now that Baby Nut is 21 years old, he goes by Peanut Jr., and the new mascot announced the birthday sweepstakes in a tweet on Tuesday, Aug. 11. To celebrate turning the legal drinking age, he's giving away prizes to fans on Twitter who share what their dream birthday gift is. One of the prizes in question is three $2,100 checks for three lucky winners. The sweepstakes begins on Tuesday, Aug. 11 at 5:30 p.m. ET through Monday, Aug. 24 at midnight ET.

To enter, you'll first need to make sure you have a Twitter account that's set on public during the promotion period and until the prizes are awarded. Then, you'll need to tweet in 10 words or less your dream birthday gift and include #MakeMyBirthdayNuts and #Sweeps. You will receive one sweepstakes entry for your tweet if it follows the necessary requirements, such as it doesn't contain any references to alcohol, doesn't promote discrimination, and more. You may enter the sweepstakes only once during the promotion period.

The sponsor will randomly select three grand prize winners on or around Wednesday, Aug. 26. The winners will be notified by the @MrPeanut account soon after to confirm eligibility. If you're a grand prize winner, you'll get a $2,100 check delivered to your doorstep by the NUTmobile approximately 10-12 weeks after winner confirmation, and the delivery will be filmed by the sponsor. If you're a resident of Alaska, Hawaii, or Puerto Rico, you'll get your check via mail.

The Planters Jr. Birthday Sweepstakes is open to legal residents of the 50 United States, the District of Columbia, and Puerto Rico. You must also be 21 years old at the time of entry. To read more about the restrictions in detail, check out the official rules here.