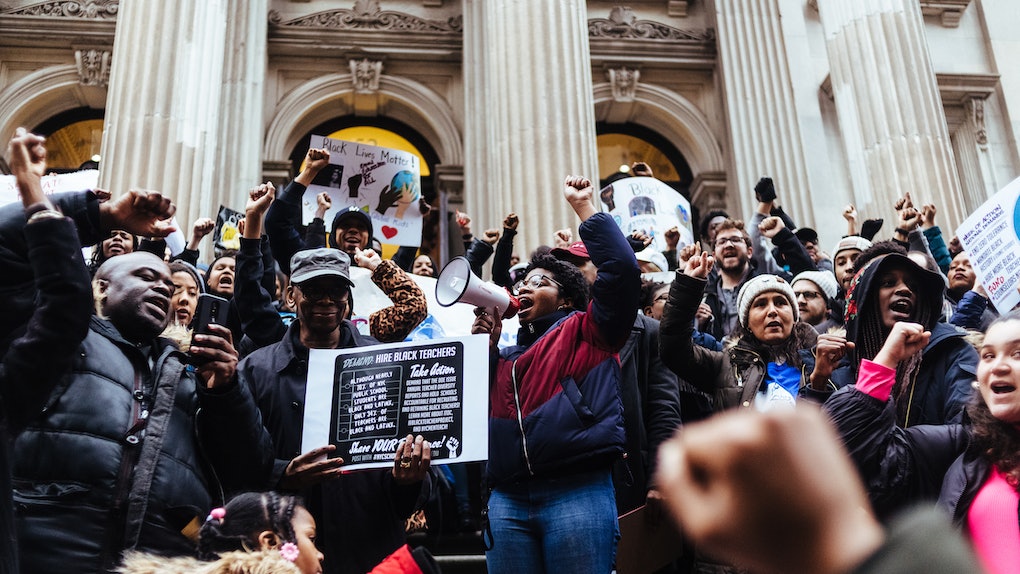 In recent weeks, mass shootings in California, Texas, and Ohio have prompted widespread calls to action against gun violence, with activists and lawmakers alike demanding more stringent gun control legislation. As the nation debates, students in particular have taken the lead in the fight for commonsense policy, starting movements, educating others, and just generally shaking things up. And it doesn't always look like you'd expect. These student activists are taking on gun violence by starting with what's important in their own lives and communities, whether it's their local neighborhood or their faith groups. Back-to-school season has never been so purposeful.

With gun violence constantly impacting communities all over the country, it can feel like there's nothing young people can do. But student activists like Alliyah Logan, Taylor King, and Zoe Terner are proof that's not true. Their work goes beyond mass shootings to talk about gun violence in the context of other systemic issues, and shows that young people can make a major difference by starting within their own communities.

It’s not just mass shootings, it’s shootings that happen every day in communities like our own.

Although Logan, King, and Terner all followed different paths to the fight against gun violence, all three of them started by looking at what they could do within their communities, whether it was their school, their faith group, or their neighborhood. According to Logan — a 17-year-old Jamaican-American youth advocate from the Bronx in New York City — much of the mainstream focus on mass shootings is a direct result of systemic racism in the United States, and that gun violence in black and brown communities, or low-income areas, doesn't get the same attention.

"It’s not just mass shootings, it’s shootings that happen every day in communities like our own," she tells Elite Daily.

Young people of color are disproportionately affected by gun violence. According to a 2017 study published in the medical journal Pediatrics, between 2012 and 2014, the annual firearm mortality rate for black children was approximately 10 times higher than the rate for white children. Children growing up in low-income communities are also disproportionately likely to face gun violence. In Jacksonville, for example, data from University of Florida Health found that from 1996 to 2016, pediatric gunshot wounds were continuously reported in neighborhoods experiencing high levels of poverty and insufficient access to key resources.

This systematic oppression of gun violence and poverty will 100% end if we’re actually equipping students.

For Logan, gun violence was so frequent in her community that it felt like it had been normalized. So when one of her friends told her about Youth Over Guns — an advocacy initiative focused on addressing gun violence in communities of color — in 2017, Logan felt that she had an obligation to join. Now, Logan is the director of youth engagement at Youth Over Guns, where she focuses on education and outreach. To her, tackling gun violence at its roots means funding schools in underserved communities, reducing police presence at schools, and fighting for education equity.

"This systematic oppression of gun violence and poverty will 100% end if we’re actually equipping students ... with the tools and the resources to be able to succeed," Logan argues.

According to Logan and Youth Over Guns, which is part of New Yorkers Against Gun Violence (NYAGV), the issues of gun violence, bias, and education inequity are deeply interconnected, which is why she wants to focus on making sure that black and brown students feel safe in their classrooms. According to a 2018 study released by the U.S. Department of Education, black students made up 15% of all students across the country during the 2015-2016 school year, but accounted for 31% of students who were arrested or referred to police at school. The National Education Association attributes this disparity, at least in part, to the fact that schools have responded to shootings with additional policing and metal detectors rather than with investments in teachers, students, and local communities. The NYAGV Education Fund's ReACTION Youth Program — a gun violence prevention education program taught in New York City public schools — is a big part of Youth Over Guns' work for this reason, Logan says.

"There’s a big correlation between the lack of education equity and the gun violence in that community," Logan explains. "If you can’t touch this root cause in black and brown communities, then you’re not going to be able to solve the bigger issue of gun violence."

Like Logan, King — a 21-year-old senior at the University of Michigan in Ann Arbor — has experienced gun violence in her community. King lost a loved one to gun violence at age 10 and felt compelled to act, learning as she went.

"In that moment, at 10 years old, I wasn’t 100% sure how to be an activist and I definitely wasn’t well-versed enough in political theory or legislative affairs," she tells Elite Daily. But the more she talked about it, the more she learned. "It really just started with conversations, the same way that I think so much advocacy starts with."

Since then, King has learned about how many communities across the country regularly contend with gun violence. "The experiences that impacted me as a young person that were so unthinkable and traumatizing to me are also daily realities for so many other people," King says.

King is from Oklahoma, where gun control legislation is fairly lax, and she wants to change that. She is currently on the national advisory board of Students Demand Action, an organization of youth activists that works in partnership with Everytown for Gun Safety to combat gun violence. Students Demand Action launched nationwide after the Marjory Stoneman Douglas school shooting in February 2018, though it ran pilot groups in previous years. Students Demand Action groups lobby legislators, hold rallies, help people register to vote, and educate their peers on gun policy.

"We’re not just trying to stop school shootings, we're trying to stop all gun violence." King tells Elite Daily. "We need to be taking a robust and multifaceted approach to this issue and that’s what we’re doing."

As a Students Demand Action group lead at her university, King focuses on everything from lobbying state legislators to developing trainings on college campus organizing. One recent event King helped out with was a press conference in Oklahoma about repealing permitless carry of firearms. Next, for Domestic Violence Awareness Month in October, King and her group at the University of Michigan intend to lobby state legislators in favor of a bill to disarm domestic abusers: According to Bureau of Justice Statistics from 2007, over two-thirds of intimate partner homicides between spouses or ex-spouses used a gun, and the Giffords Law Center to Prevent Gun Violence notes that abused women are five times more likely to be killed if their abuser has a gun.

Activists from Student Demand Action plan to set up meetings with a wide range of Michigan legislators, King says — "those who support we will meet to thank, those who are on the fence we meet to try and give them the extra push to support, and those who oppose we meet to do a bit of ground softening with them." Then, they will take fact sheets to the Capitol to continue lobbying on the ground.

So much of my work and the policies that I support comes from my Jewish background and the values we’ve been taught.

Both King and Logan work with groups that specifically focus on the issue of gun violence, but that's not the only possible route to get involved. While there are many youth advocacy groups exclusively dedicated to combating gun violence, such as Students Demand Action, March For Our Lives, Youth Over Guns, and the Brady Campaign, other youth activists are increasingly getting involved in the fight against gun violence through other avenues, such as their faith-based organizations and communities.

Terner, for instance, became involved with the fight against gun violence through NFTY: The Reform Jewish Youth Movement, the youth branch of the Union for Reform Judaism (URJ), where Terner now chairs the gun violence prevention campaign. With NFTY, she led fellow students on actions like lobbying for H.B. 8, a bill to require universal background checks on gun purchases. Terner, 19, tells Elite Daily that NFTY gave her the "support and infrastructure" to pursue justice, starting when she was a freshman in high school.

"So much of my work and the policies that I support comes from my Jewish background and the values we’ve been taught," Terner says. "Our Reform Judaism is a faith and a history of taking action and standing up against oppressors, and standing up for marginalized communities and raising our voices whenever possible."

After the Parkland shooting, Terner says that she took a bus from Parkland to Tallahassee with students from Marjory Stoneman Douglas High School to attend rallies and lobby state legislators on the subject of gun violence. NFTY also has an annual convention to address numerous social justice issues, Terner adds, and two March For Our Lives activists — David Hogg and Matt Deitsch — both attended the 2019 iteration, while Terner was still NFTY's social action vice president. Terner also served as a plenary speaker at NFTY's 2019 convention.

But while Logan, King, and Terner are incredibly engaged in the fight against gun violence, they are also still full-time students, and often have to juggle their course loads with their activism. "Sometimes I forget that I’m still a teenager and I still have so many years to fight for these issues and the world is not ending any time soon," Logan says. "I want to make sure I’m present in every space that I’m in … but you can’t really fight for it if you’re losing energy from yourself."

King adds that "taking a step back" can be difficult because "when you do it, you feel like you’re shrugging off your responsibilities." This is especially true, King says, because the fight against gun violence is "literally life or death." That's why King encourages young people who are thinking about engaging in gun control advocacy to ask for help when they need it.

"If you keep doing the work and you keep building coalitions, it’s going to grow and it’s going to develop and you don’t have to go through it alone," King says.

[Young people should] not be afraid to raise their voices, especially in spaces that don’t traditionally have young voices.

Terner and Logan, meanwhile, both urge potential young activists to be confident in themselves and their power to make a difference. "[Young people should] not be afraid to raise their voices," Terner says, "especially in spaces that don’t traditionally have young voices, whether that’s at a town hall or on their synagogue board." Logan adds that young people should remember that their experiences are valid.

"You have to put yourself first," Logan says, "and you have to know you’re unstoppable."

King, Logan, and Terner all came to the fight against gun violence from different paths, but they all make it clear that making change means starting where you're at — wherever that is.

"I think the most valuable piece of advice that I have gotten and that I think I like to give," King says, "is that the most important thing you can do is just to start."