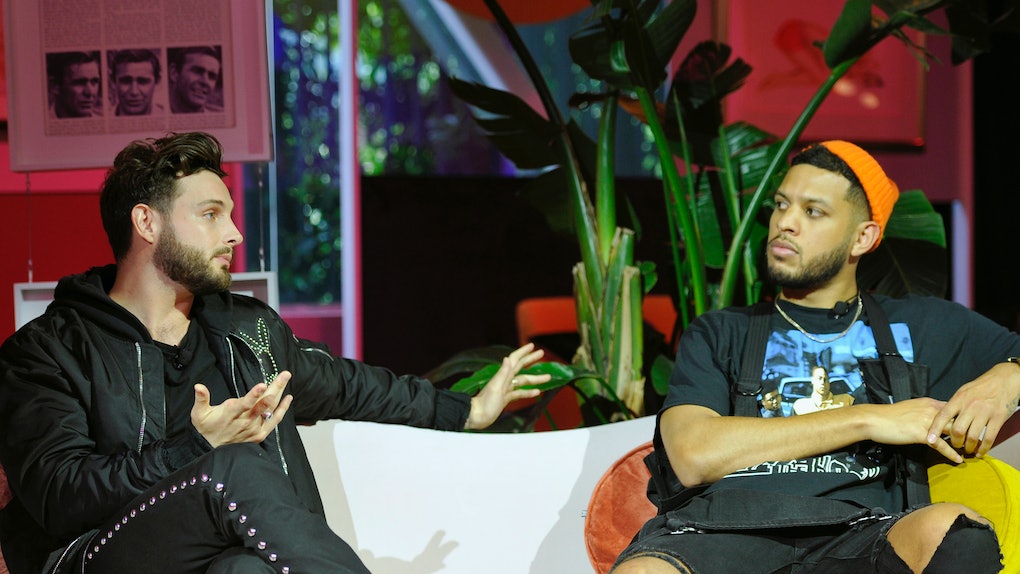 Gender is changing every day. That was the general theme of the Playboy Playhouse pop-up event on May 11 in West Hollywood. The pop-up was held in honor of the magazine's 65th anniversary, which also marks the start of a new era for the brand. Moving forward, the magazine has removed the tagline "Entertainment for Men," which graced its covers for the vast majority of its tenure. Instead, Playboy is making it clear that it belongs in today's inclusive landscape of gender and sexuality exploration. At the pop-up, actors Nico Tortorella and Sarunas J. Jackson talked about the "Future of Masculinity" and how their characters are helping to change how Hollywood looks at gender in this new era.

Both actors are known for playing love interests on female-driven shows, which is a bit of a flip of the usual paradigm of having a male lead who goes after a female costar. Tortorella plays Josh on Younger, who is one point of the main character Liza's (Sutton Foster) love triangle. Jackson plays Molly's (Yvonne Orji) love interest on Insecure. For both of them, their characters support the female leads. Jackson explained, "I'm always going to be serving a woman's story."

Jackson went on to describe how men are more often sexualized on Insecure are, which gives more focus to the women's stories and differentiates the show from others. He said:

On Insecure, the men were more nude than the women were. And I'm honestly fine with it because when you think of what actresses have had to go through forever – they're usually the ones who are showing way more than us.

Tortorella – who is gender non-conforming and uses gender-neutral pronouns in real life, but plays a man on Younger – explained how they're happy to elevate the women on their series. They explained:

I think what's special about Younger is that it's a show about women and none of the women are sexualized, really at all, which is so rare on TV. And the dudes on the show, me and Peter Hermann, who plays Charles, are the ones that are sexualized.

Thanks to the public platform that Hollywood provides, Tortorella is able to share their knowledge and experiences about the vast gender spectrum with a wide audience. "I'm in a specific position where I'm able to play with it and it's safe for me," Tortorella explained. "But so many of my friends – specifically trans feminine people of color in New York City - still to this day walk outside and get spit on, hit, every single day they walk outside. And so much of the work that I'm doing right now is to bring that conversation into spaces that aren't having it. Gender is absolutely political. I'm dealing with it on a personal level, too. But in the larger scheme, my personal journey through gender is so much more global than this body because I recognize I have the power to talk about it and make changes in ways that other people can't."

Part of the work of encouraging people to have a broad understanding of gender is to show audiences new ways for gender roles to exist. This is what's happening on shows like Younger and Insecure, and hopefully it's inspiring others to explore a more inclusive landscape.