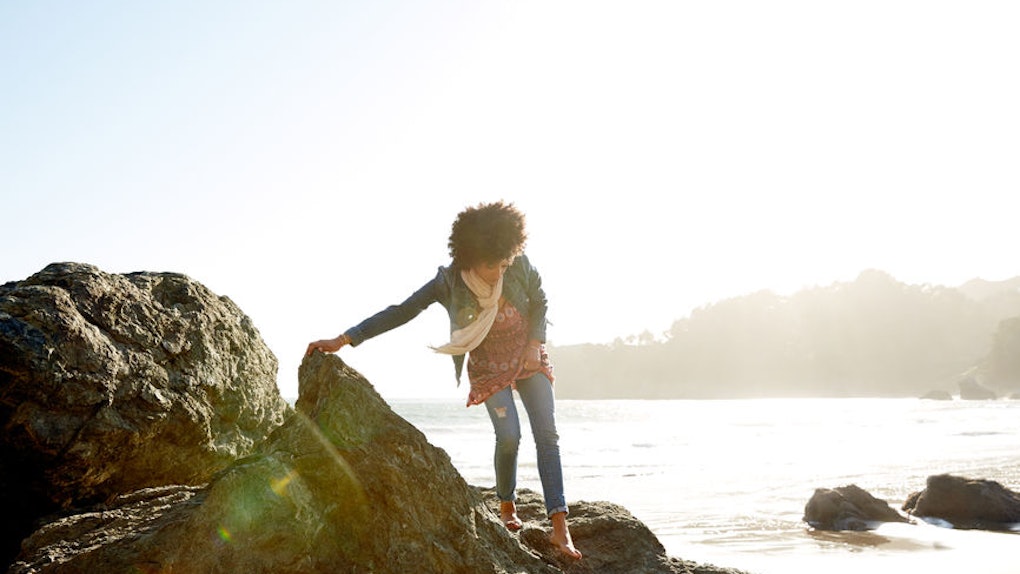 Here's How Meditation Can Help With Loneliness & Acceptance Of Your Emotions, According To Science

Loneliness is something that everyone experiences at one point or another, but of course, just because it's common, that doesn't mean it's easy to deal with. Whether you're living in a brand new city away from your hometown, or you landed a job that requires you to work remotely instead of in an office, that feeling of being alone can be overwhelming at times. If you're struggling with these emotions yourself, it might comfort you to know that meditation can help with loneliness, according to the results of a new study.

For the study, The New York Times reports, researchers gathered 153 adults who described themselves as "stressed out" (which, per the news outlet, was meant to distract the participants from the real focus of the study, i.e. loneliness). To establish a baseline of where the participants were at in terms of their mindset at the beginning of the study, the researchers asked them to fill out a survey that included questions about their interactions with others, their social networks, and whether they regularly deal with any feelings of loneliness.

Additionally, the researchers monitored the participants in real time over a period of three days by texting them questions about "what they were doing and with whom," according to The New York Times — you know, kind of like how your parents would always ask you to tell them what you were doing with your friends when you were in middle school, except, hopefully less lame?

After those baseline measures, the participants were given an app to use on their phone, and the researchers randomly divided the volunteers into three groups: In one group, the app gave the participants some general tips for dealing with stress. In another group, the app taught the volunteers about mindfulness and the practice of "paying close attention to the moment and focusing on breathing and other sensations," per The New York Times. In the third group, the app taught the participants the same mindfulness techniques as the second group, with additional instructions to "take note of and say 'yes' aloud to all sensations," according to the news outlet. For instance, if a participant noticed that they could physically feel their tongue on the roof of their mouth, or even if they mentally noticed a feeling of sadness, they would then have to say "yes" out loud. The researchers called this approach to mindfulness “equanimity.”

Each group was told to use the app for 20 minutes, then practice their respective techniques for another 10 minutes on their own, every day for two weeks, per The New York Times. To measure any differences between the participants' baseline mindset and how they felt after using the mindfulness strategies for a couple weeks, the researchers gave them the same survey questions, as well as the same three-day text monitoring.

The results of the study, which have been published in the scientific journal Proceedings of the National Academy of Sciences of the United States of America, showed that the general stress management and mindfulness techniques had little to no effect on the participants who practiced them — but here's where things got really interesting: According to The New York Times, the participants who practiced "equanimity" meditation were "measurably more sociable," engaged in "several more interactions with people that lasted at least a few minutes," and their survey responses showed "a decline in their feelings of loneliness."

The researchers told The New York Times that they believe the equanimity aspect of meditation was "key" in making a difference in participants' feelings of loneliness. And it kind of makes sense when you think about it, right? As the researchers wrote in the abstract of their study, developing an "orientation of acceptance toward present-moment experiences" — even when those present-moment experiences are uncomfortable or difficult to accept — can make a huge difference in dealing with feelings of loneliness. In other words, actively accepting negativity when it comes to you, rather than squashing it down, pretending it doesn't exist, or worse, judging yourself for having those feelings in the first place, seems to be an effective way to deal with these emotions overall.

Counselor and relationship expert David Bennett (who was not involved in the study) says that meditation in general can help with "emotion regulation." He tells Elite Daily in an email, "It can help you avoid the emotional ups and downs that come from reacting to the various events in your daily life."

In a sense, Bennett explains, meditation can help to ground you in "something deeper than just feelings that come and go," and being grounded can not only help you feel less lonely, it can help you take steps toward avoiding loneliness — like reaching out to a friend you haven't spoken to in awhile to meet for coffee, or asking a co-worker you get along with if they'd like to join you for happy hour drinks.

Again, loneliness is something that everyone deals with, so don't be ashamed if you're struggling with it. Consider practicing this type of acceptance meditation the next time these feelings overwhelm you, and remember, if you need a little extra help, it's always OK to touch base with a professional about what you're going through.