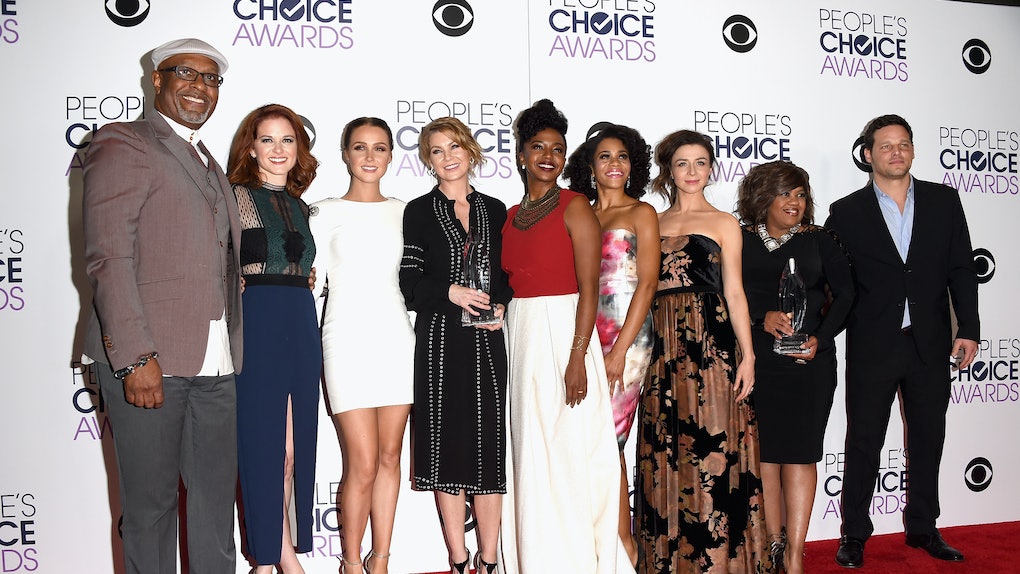 Season 15 of Grey's Anatomy officially came to a close on May 16, and even though it feels like the show has been on for literally ever, I'm still just as invested as I was on day one. Some of the anxiety-inducing moments Shonda Rhimes has written since the show first aired in 2005 have had my favorite characters' on Grey's love lives at the center of them. So, naturally, I am heavily invested in knowing everyone who the cast of Grey's Anatomy is dating in real life.

Granted, I was really hoping to find that all my favorite onscreen couples had somehow made it offscreen, but this is real life, and unfortunately, not the fairytale in my head where every TV couple is actually in love. While none of my favorite Grey's couples — read: Alex and Jo or Meredith and DeLuca — are together off-screen, the actors do seem to have happy relationships in their own lives. Most of the stars on the show are married with children, and have been for some time. So even though we probably won't be seeing any Grey's Anatomy-meets-IRL couples anytime soon, feast your eyes on the relationships your fave actors are currently thriving in.

Grey's Anatomy star Ellen Pompeo has been happily married to music producer Chris Ivery since 2007, Country Living reported. The two met in a grocery store in Los Angeles in 2003 and began dating six months later. After tying the knot secretly in a New York City Hall wedding, they had three children, Stella Luna, Sienna May, and Eli Christopher. Meredith has three kids, too, y'all! Talk about life imitating art.

Dr. Alex Karev may be number one in my heart on Grey's, but real-life Justin Chambers is up there for me, too. Chambers and his wife Keisha have been married since 1993 and have five children: Jackson, Eva, Kaila, Isabella, and Maya. Guess you can say they have a full house.

Andrew DeLuca has made his way into viewers' hearts across the country, and it seems like actor Giacomo Gianniotti has made his way into a very lucky lady's heart, too. According to PEOPLE, on April 29, 2019, Gianniotti and makeup artist Nichole Gustafson said "I do" at an Italian Villa in Rome. Since Gianniotti proposed in 2017, the couple has posted multiple adorably captioned photos on Instagram, and it's enough to make any Dr. DeLuca fans swoon. (Read: this, this, and OMG, this.)

Jesse Williams and Taylour Paige first sparked dating rumors in January 2019 when the two were reportedly seen getting close at the Sundance Film Festival, E! News reported. On May 10, the couple made their relationship public with their red carpet debut at the Ozwald Boateng Harlem Runway Show at the Apollo Theatre.

While Alex and Jo have become one of the most iconic couples on Grey's, they are, unfortunately, not together in real life, but Camilla Luddington is engaged! Luddington and now-fiancé Matthew Alan welcomed a baby girl in April 2017 and got engaged the following New Year's Eve, PEOPLE reported at the time. Though they haven't publicly announced a date for their wedding, in September 2018, Luddington told Entertainment Tonight she and Alan were thinking about tying the knot sometime during summer 2019.

Dr. Amelia Shepherd snuck her way into the hearts of Grey's fans when she became part of the main cast in Season 11 in 2014. Throughout the show, she's dated a few people (and even married one!). But in her actual life, Caterina Scorsone has been married to singer-songwriter Rob Giles since 2009. They have two girls, 2-year-old Paloma Michaela and 6-and-a-half-year-old Eliza.

The most recent Grey's Anatomy actress to get married is Kelly McCreary, aka the incredibly brilliant, Head of Cardio at Grey Sloan Memorial hospital, Dr. Maggie Pierce. McCreary and director Pete Chatmon, who she met on the set of the show, tied the knot on May 7, 2019, in an absolutely stunning beach wedding. In an interview with the Los Angeles Times in January 2019, McCreary publicly announced she and Chatmon were engaged, and had been for some time but chose to keep it a secret.

Trauma surgeon Dr. Owen Hunt has had his fair share of heartbreak throughout his run on the show, but Kevin McKidd, on the other hand, is happily married. McKidd and private chef Arielle Goldrath got married in early 2018, PEOPLE reported. "Arielle and I are so happy to announce our marriage and new baby, who is soon to join our growing family," McKidd wrote on his website.

Dr. Catherine Fox is the epitome of strength on Grey's Anatomy, and has been since was first introduced on the show in Season 8. It seems like who she is in real life is no different. Debbie Allen and former NBA player Norm Nixon have been married since 1984, making this year their 35th year together. They have three kids: Vivian, DeVaughn, and Norman.

So, you'll be happy to know that while there is a ton of heartbreak on Grey's Anatomy, the actors who play your favorite characters don't totally face same emotional tolls as their fictional counterparts. Keep killing it, Grey's cast.

More like this
Did Pete Davidson Confirm He's Dating Phoebe Dynevor? Here's Why Fans Think So
By Corinne Sullivan
10 'Gossip Girl' Actors Who Dated Each Other IRL
By Corinne Sullivan
Are Demi Lovato & Noah Cyrus Dating? They're Reportedly "Hanging Out"
By Joyann Jeffrey
Stay up to date