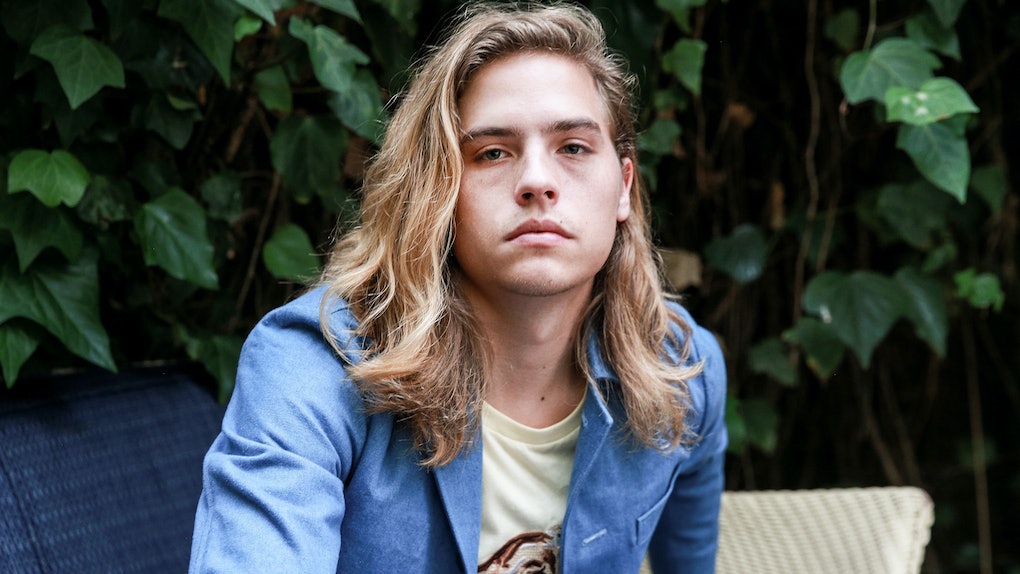 Here’s Everyone Dylan Sprouse Has Dated, Because His Love Life Is Suite

If you're anything like me, then you probably spent a good amount of your childhood obsessing over a certain pair of twins who starred on The Disney Channel. Yes, Dylan and Cole Sprouse surely lived the ~suite~ life on TV, and I don't know about you, but I so wanted to live it with them. Now that the Sprouse twins are older, they've only gotten cuter, which of course leads me to wonder about everyone Dylan Sprouse has dated. Naturally.

Seriously, Dylan (who played Zack Martin on The Suite Life Of Zack & Cody) was always charming in his role, and it certainly seems like he's turned into quite a suave young man. Of course, his brother Cole is currently starring on the hit CW drama, Riverdale, and is dating his costar, Lili Reinhart, but Dylan has remained mysterious and intriguing in his romantic relationships.

So, who has he dated? And does he currently have a girlfriend? Well, dear reader, relax. Because you definitely came to the right place, and what's more, while Dylan might not share as much about his life as his brother Cole does, that doesn't mean he isn't living it to the fullest. Elite Daily reached out to Sprouse's team for comment on these reported relationships, but did not hear back by the time of publication.

Here's a quick rundown of everyone Sprouse has been romantically linked to. Try not to get too jealous.

1. His current girlfriend is Barbara Palvin.

As Palvin's own Instagram post on Sprouse's birthday seems to have confirmed, the two are certainly an item. According to W Magazine, they've been seeing each other since July 2018, and the 24-year-old is a pretty well-known Hungarian model in the fashion world.

On Sprouse's birthday, Palvin posted the above selfie, along with the super sweet caption, "Even though it’s your birthday I feel I just got the biggest present of all." She concluded her post by writing, "Happy birthday Boss Baby."

Basically, they're a very happy and ridiculously attractive couple. Good for them.

2. He was dating Dayna Frazer for a few years, too.

Sprouse and Frazer had reportedly been dating for three years before they ended things in 2017. At the time of their breakup, Sprouse was accused of cheating on Frazer, something he seemingly denied in a series of tweets.

Unfortunately, both Sprouse and Frazer deleted pictures of themselves together from their respective Instagram accounts, so there aren't too many photos of them together, but it certainly seems to have been a pretty dramatic breakup.

3. A young Sprouse also had a fling with Miley Cyrus.

Back in the good old days, Sprouse had a fleeting romance with fellow Disney Channel star, Miley Cyrus. But, alas, it wasn't meant to be. Speaking to Jimmy Kimmel about the relationship, Sprouse said, "We met at her set, I believe, and we dated," according to Seventeen. "And then Nick Jonas walked by and then it was over."

4. But there have been plenty more rumors, too.

Now, because Sprouse is a celebrity and has spent the greater part of his life in the public eye, there are plenty of rumors surrounding other people he's dated. But, most of these rumors are without proper proof, and are likely just the result of speculation gone awry.

Rumors about Sprouse dating Kara Crane, Brenda Song, and other Disney Channel stars have definitely gotten people talking, but it certainly seems as though the actor has kept a pretty low profile when it comes to dating.

Additionally, it also seems as though Sprouse takes his relationships seriously, and cares about them enough to keep them private. So as much as I'd love to know every last detail, I must admit, that's certainly admirable.