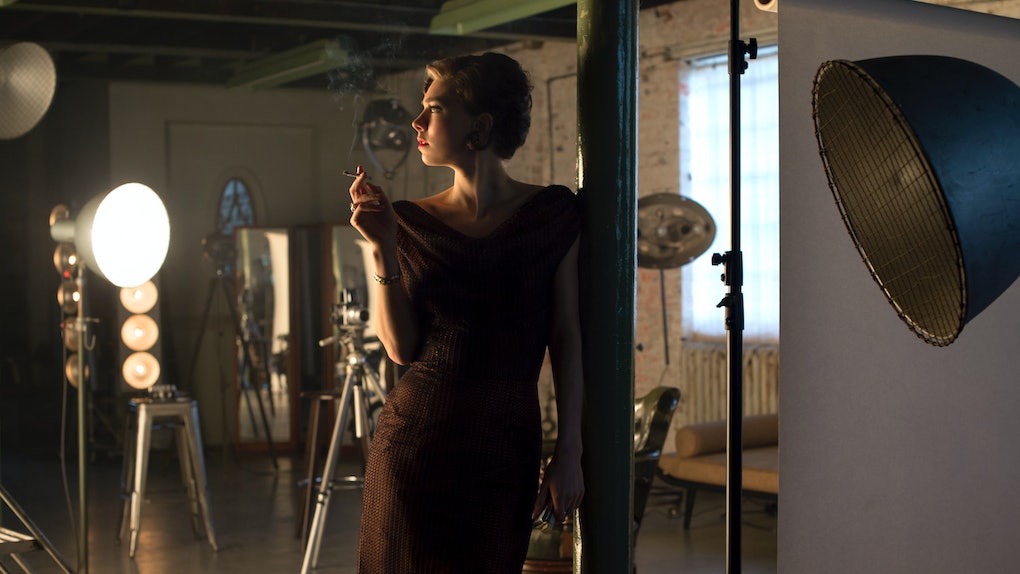 Season 2 of The Crown arrived last month. Time and history now marches on for the show. The plan from the beginning was for the show to do six seasons, covering six decades of the Queen's reign, from the 1950s to the 2000s. But how can one actress cover all six decades, without some serious old age makeup? The production's solution: recast every two years, as the characters age. We already know who will replace Claire Foy next year: Olivia Colman. Now we're hearing Helena Bonham Carter will play Princess Margaret on The Crown, replacing the current actress Vanessa Kirby.

By the end of Season 2, when the photograph of the family is taken at the very end, it is the end of spring in 1964, with Prince Edward, Elizabeth's final son, in The Queen's arms and Lady Sarah, Margaret's second child, on full display. (Lady Sarah was born in May of 1964, which is how we date the photo.) The Queen is 38, Princess Margaret is 34. But it doesn't quite feel like that does it? Though Foy is 33, she practically hasn't changed a day since Season 1, when she was playing a 21-year-old monarch. Kirby isn't even 30 yet. With next season almost assuredly diving into the 1970s, when both women we facing down 50 (the Queen was born in 1926, her sister in 1930), the only way to keep up appearances is to go with an older actor.

While Olivia Colman, who is confirmed to take over the lead role, isn't a household name in the United States, Helena Bonham Carter is. Even before she was Bellatrix to every Harry Potter fan in the world, she was a star; she started by playing Lucy Honeychurch in 1985's A Room With a View. Other credits include (but are in no way limited to) Charlie and the Chocolate Factory, Mrs. Lovett in Sweeney Todd: The Demon Barber of Fleet Street, and the Red Queen in Alice in Wonderland.

So is this a good casting? One of the more remarkable things is how the show has made up Kirby and Foy to look like the young versions of Margaret and Elizabeth. Let's go to the tape.

They made Lord Snowdon a whole lot sexier, but Kirby is a pretty good match for the real thing.

Bonham Carter's face is a little more elfin, but they landed the eyes and nose almost perfectly.

Then there's the attitude. As the Queen herself notes in the series, Princess Margaret has always been the one to take advantage of her privileged status. She loved the party scene (even after being married), she loved the attention, she loved the notoriety. And she's prone to rages, especially as her marriage to Snowdon dissolves over the next two decades. (Spoiler alert! She'll have a royal divorce in 1978.) There will be plenty of scenes for her to fly off the handle.

And if there's one thing Bonham Carter is known for, it's the ability to play crazy-mad and perform fly-off-the-handle rages on screen.

Meanwhile, here's the woman who will be playing her sister, taking the place of Foy, Olivia Colman.

At this point, if the rumors are true and Bonham Carter is confirmed for the role of Margaret, that leaves Prince Philip to be recast. Colman says above she's hoping for another Doctor Who to step into the role, namely David Tennant, who was her co-star in Broadchurch.

Tennant is getting on in years, he'll be 48 in April, so that is a possibility. But like casting Matt Smith this will be a continuation of handsoming up Philip.

The other major casting is Prince Charles, who will go from a 12-year old grammar school kid at the end of Season 2 to the investiture-d next-in-line-for-the-throne by the end of Season 3. One wonders if they'll handsome him up as well. If they do, can I perhaps suggest Adam Driver?