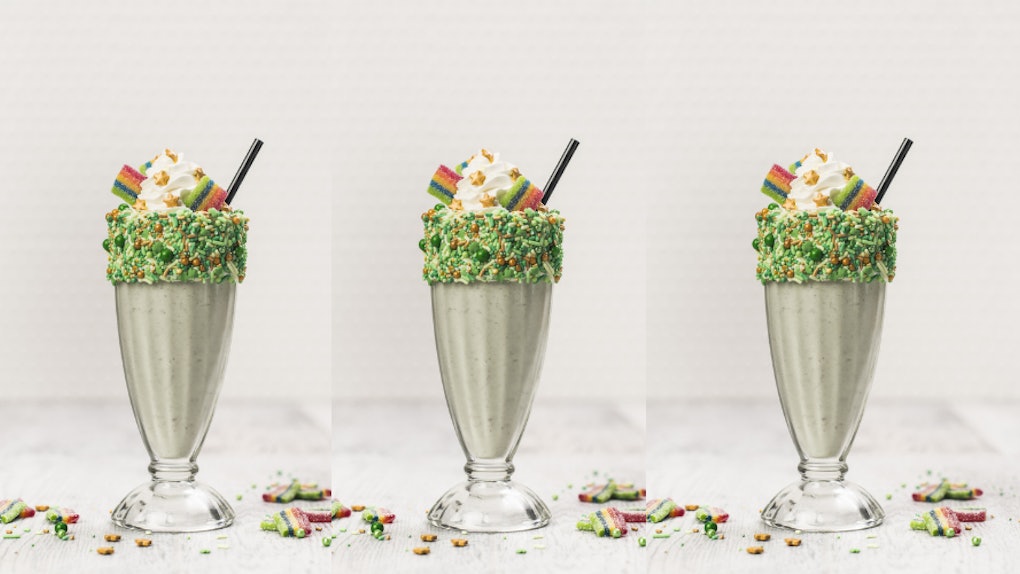 Somewhere over the rainbow is a pot of gold, or so the tale goes. Irish folklore is certainly elaborate and I love all of the stories that come along with St. Patrick's Day. I am a Murphy after all. But there's nothing I love more than this extremely festive St. Paddy's Day milkshake from Hard Rock Cafe. It's made with rainbow candy ribbons and gold star sprinkles. I'll never know what's actually at the end of the rainbow, but I imagine it must like a little something like Hard Rock Cafe's new St. Paddy's Day Shake.

On Wednesday, March 6, Hard Rock Cafe announced a special St. Patrick's Day menu that includes a couple of delicious food items including this St. Paddy's Day Shake. The dreamy dessert is available for purchase starting on Wednesday, March 13. It's only available for a limited time. After St. Patrick's Day, which just so happens to take place on Sunday, March 17, this shake will no longer be available to order. If you're lucky, you'll be able to sip on one of these super festive shakes before it's too late.

"Hard Rock Cafe is thrilled to provide guests with a dining and entertainment experience that sham-rocks this St. Patrick's Day," Leigh Merritt, Vice President of Food & Beverage for Hard Rock International said in a press release. "Whether our guests come for our boozy St. Paddy's Shake or to indulge in a full Irish feast by pairing our shake and Guinness & Bacon Jam Cheeseburger, we promise all of these festive menu offerings will have our guests feeling lucky."

Hard Rock Cafe's St. Paddy's Day Shake is made with Absolut Vanilla vodka, creamy vanilla ice cream, and Oreo cookies, per the restaurant. Hard Rock Cafe also adds in a hint of mint to really expand upon the overall flavor of the shake. Then, the St. Paddy's Shake is topped with a homemade white chocolate whipped cream. Of course, there's more where that came from. Rainbow candy ribbons and gold star sprinkles are added to the milkshake to give it an extra special festive touch. Just look at it. There's so much detail to admire here. It really reminds me of something you might find at the end of the rainbow, or so I would imagine. Best break out the portrait mode setting to photograph the milkshake, because this beauty deserves nothing less than.

In addition to the St. Paddy's Shake, the Guinness and Bacon Jam Cheeseburger is also on the special St. Patrick's Day menu from Hard Rock Cafe. The half-pound burger features bacon jam made with Jameson Whisky and a cheese sauce made with Guinness beer, according to the restaurant. That's about as Irish as it gets, folks. The patty also features traditional toppings like lettuce and tomato. The mouthwatering burger is served on top of a tasted bun and comes with a side of seasoned fries.

My tastebuds are pretty psyched about the entire St. Patrick's Day menu from Hard Rock Cafe. Just remember that you only have from Wednesday, March 13 to Sunday, March 17 to partake in the deliciousness. Since St. Patrick's Day tends to be a popular time for people to eat and drink, I definitely think it's worth making a reservation. Always better to be safe than sorry. Hard Rock Cafe has hundreds of locations around the globe. Make sure to take a look and find the closest restaurant to you.

May you feel as happy as Ron Swanson looks in that gif after consuming the St. Paddy's Day Shake. Cheers.