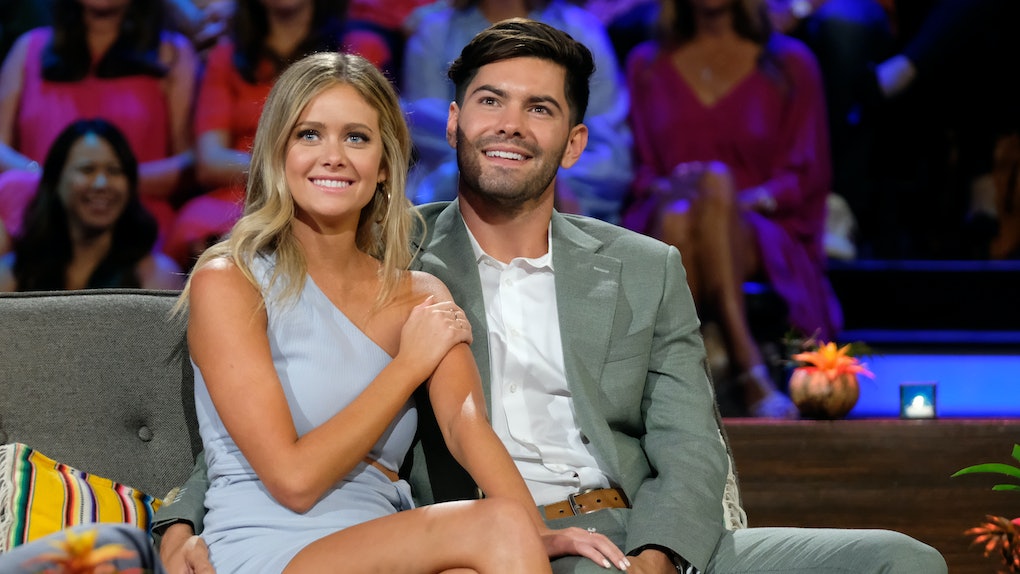 Season 6 of Bachelor In Paradise was packed with so much juicy drama, it was a struggle to keep up most of the time. One of the cutest and most stable relationships was between Hannah Godwin and Dylan Barbour. But, how's the couple doing now that the show has ended? Well, it seems like Hannah Godwin and Dylan Barbour's body language post-Bachelor In Paradise gives some interesting insight into their current status. To get some intel on what's going on between the duo now that the cameras are (sort of) off, I spoke to Traci Brown, body language expert and author of Persuasion Point.

Overall, despite their picture-perfect couple persona, Brown noticed some signs that the couple could be playing up their "love" for the camera. "There's a lot of signs that say they will [last], but the unusual stuff is quite striking," Brown tells Elite Daily. Although it's important to keep in mind that while it may be BIP couples' jobs to look cute and carefree in pictures together, real relationships aren't always drama-free. However, when a partnership appears too perfect, this can also raise some valid questions. With that in mind, here's what Hannah and Dylan's physical dynamic says about their current connection.

Despite Their Smiles, Hannah's Eyes Might Be Telling A Different Story.

"Here they both seem happy on the surface," says Brown. "They're sitting close with his hand is on her butt, and her legs are crossed toward him showing that's where her attention is while smiling." Although that might all sound good, Hannah's face and hand placement suggest she might not be as comfortable as one would think. "Her eyebrows have a look of worry, and she's holding her shoulder with her hand, blocking herself from what's around," observes Brown. "I'm guessing that they're going to show a clip that she's concerned about or the conversation has taken a concerning turn."

This Pic Is Cute, But Could Be A Little Staged.

At this point, we all know how good Hannah and Dylan are at taking adorable pictures. However, it appears this one might have taken a bit of effort to pull off. "This is a fun pic, but it's staged," explains Brown. "See how she's smiling and not really kissing him?" Brown also points out that Dylan is definitely in control here because his hand is the only thing supporting Hannah's head as she leans back. "She's trusting him to not drop her," Brown adds.

Their Signals Are Mixed.

This kiss is very sweet, and their body positioning makes it clear that these two are on the same page. "The good thing is that they’re sharing the same emotion," says Brown. However, it's not clear if the emotion they're sharing is genuine interest. "Neither of these two is fully paying attention to each other," notes Brown. "See how both have a foot pointed toward the camera?" That might be an indication that that's where most of their interest lies.

They Look Happy, But Dylan's Showing Some Indicators Of Stress.

"They're close, he's looking her in the eye, and she's reaching for him," notes Brown. "All of those are good signs, but he's got one hand in his pocket and the other on his head. That's what people do when they're stressed." Keep in mind, though, that experiencing stress is normal, and there's no way to know for sure if it's a reflection of the relationship, or if Dylan's just got a lot on his mind.

Ultimately, there's no denying how cute of a couple these two make. However, their post-Paradise dynamic (at least on social media) might be a little up in the air. For now, here's hoping the good things about their body language are strong enough to overcome the confusing bits.