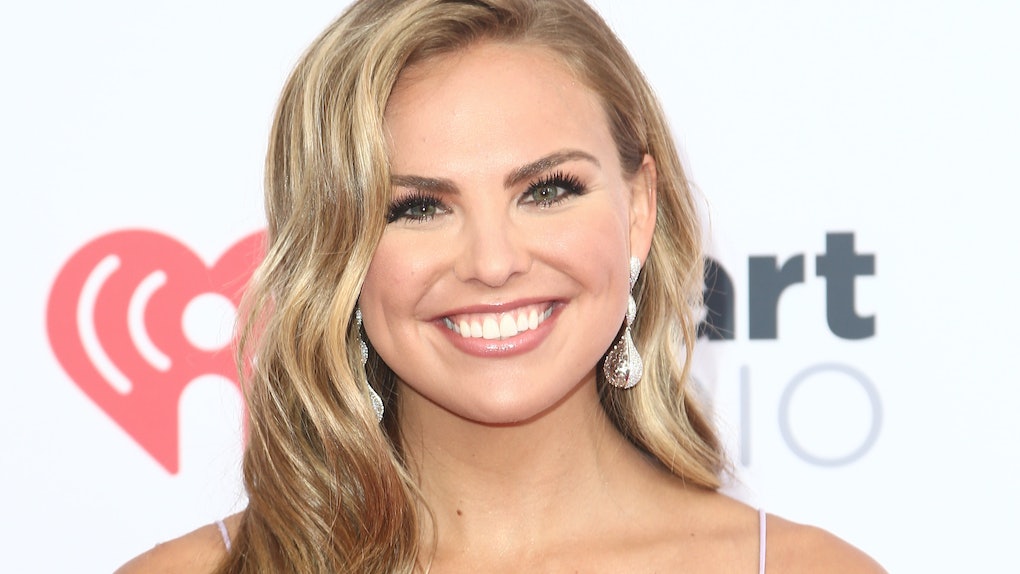 Hannah B.'s Quotes About Love Will Make You Love This Bachelorette Even More

It's officially the time of year when Monday nights turn into the perfect excuse to consume copious amounts of wine and cheese, and aggressively yell at the TV; when the wine flows freely and every television set in America tunes into the IRL fantasy of one man or woman searching for love on national television. The Bachelorette is back in full swing, y'all, with Hannah B. taking the lead this season. The 24-year-old has garnered plenty of love on social media, and taking a closer look at Hannah B.'s quotes about love will show you exactly why.

Now, in case you haven't been keeping up, Hannah was chosen as the newest Bachelorette after being sent home on Colton Underwood's season of The Bachelor. (Right after she met his family in his hometown, no less.) After she said her teary farewell, fans everywhere fell in love with the former Miss Alabama, and it's easy to see why. Hannah is wise beyond her years when it comes to love, and there's really no doubt in anyone's minds that she's going to walk away from her season of The Bachelorette happy and thriving.

Seriously, just take a look at some of the pieces of wisdom the southern belle has already imparted on viewers, because it's really something.

1. She knows what she wants.

After Underwood sent Hannah home, she was understandably heartbroken. But in her tearful goodbye, she still managed to keep it real. "The desire of my heart is to be loved so fiercely by somebody," she told the cameras. "I will not allow myself to not feel chosen every single day."

Such a good attitude to have! Everyone deserves to feel chosen, and Hannah is smart for remembering that, even when dealing with loss.

During the Women Tell All special that aired before Underwood's finale, Hannah had some more time to explain how she felt and what she was looking for in love. "I thought my life was going to be this certain way," she told Chris Harrison. "I grew up in Alabama. I was gonna marry the guy who I dated for so long right out of college, start spitting out babies."

"Ultimately, I just thought that was gonna be OK for me. But it is not okay for me. I want so much more, and I deserve so much more... and this experience and the relationship that I have with Colton just allowed me to see myself in a different way; and be vulnerable with who I am and who I want to be and what type of love I want to have and receive."

3. She knows how to handle a breakup.

While reflecting on how things ended between she and Underwood, Hannah also explained that she was ready to move on. "I think watching back the breakup always makes me a little bit emotional, but ultimately, he didn't feel the same way I did and I want somebody to feel the same way about me as I do about them," she told Entertainment Tonight. "So, for me, there's been time and he wasn't my person. I think he's a great guy and I want the best for him and I want the best for me too... I was falling in love with him, but I wasn't in love with him."

Yes! Move on and get the love you deserve!

Considering she's on The Bachelorette, this shouldn't come as much of a surprise, but still. Hannah is ready to go for it. "I would love to have the opportunity to continue on shedding that layer of just trying to be whatever I think people want me to be and just being myself," she also told ET.

"I think I really believe in this process and I do think you can fall in love here and be in love and find your person. So, if it could be me, that would be great. I'm really sincere about it."

Listen, Hannah knows she's young and that people talk about that, but that doesn't mean she isn't prepared to find her soulmate. "I know I'm young, but I would not have gone on this show if I hadn't really thought about what was at the end of this," she said on Ellen.

Hannah is clearly ready for love, and she isn't going to let age, heartbreak, or anything else stand in her way. Honestly, good for her! She knows that she's doing, and she's staying true to herself in order to find true love.