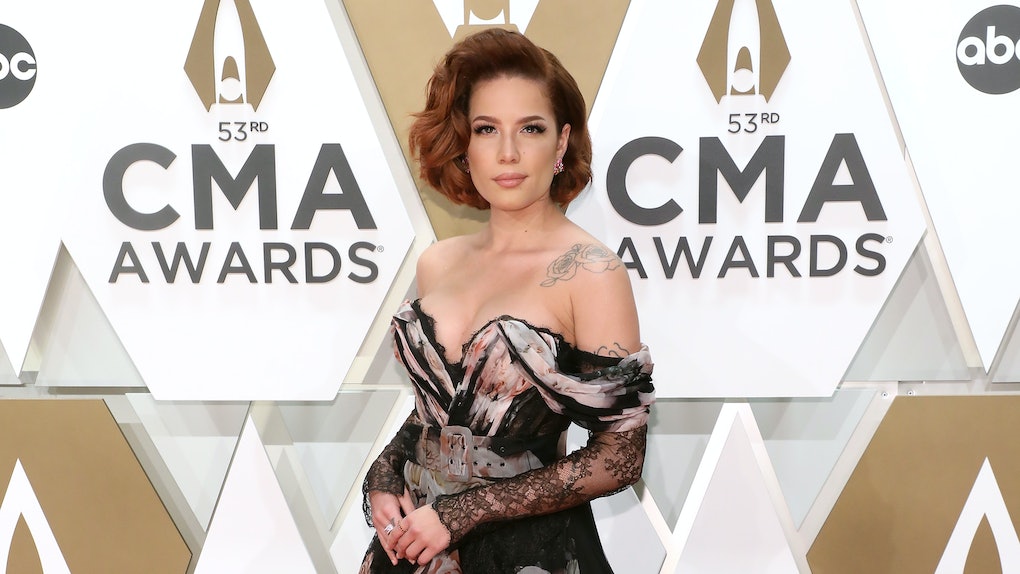 Halsey's Tweets About Her Pregnancy Rumors Are Firm & Hilarious

As great as it would have been to have had a little mini version of the "Bad at Love" singer crawling around town, Halsey's tweets about her pregnancy rumors make it clear the pop star is definitely not with child. The rumors started percolating on the internet after Halsey was photographed out in Santa Monica on Nov. 17. She and her boyfriend Evan Peters were both seen touching her stomach. "They both went in for a drawn-out rub of Halsey's belly, and they both seemed pretty happy about it," TMZ wrote in a description of the images.

Since the pictures were leaked, the internet has been speculating that the "Eastside" singer is expecting a child with her actor boyfriend. But, like pretty much every other rumor on the internet, there's no truth behind the claims that Halsey is pregnant. In fact, she decided to set the record straight, herself, on Nov. 18 with two perfectly phrased, LOL-worthy tweets.

"Still not pregnant," she wrote in the first tweet. "Still just allergic to gluten. Still love pancakes." As if her first joke wasn't LOL-worthy enough on its own, Halsey followed it up with a second tweet four minutes later in which she simply wrote: "Is it a boy? Is it a girl? It’s pancakes."

This isn't the first time Halsey has taken to Twitter to hilariously shut down pregnancy rumors. In February, Halsey sparked rumors by tweeting that she had "The Biggest Secret" and that the secret in question was totally "unrelated" to her album.

When fans quickly responded by assuming that the "secret" she was referring to was a pregnancy, Halsey quickly shut them down in a follow-up tweet. "People think my last tweet is me hinting I’m pregnant, which means I’m either: a. gaining weight b. acting weirder than usual," she wrote an hour after posting the original tweet. "Jokes on u, I’m doing BOTH! However STILL not pregnant!"

The main takeaway here? Halsey's not pregnant. And she's pretty dang open with her fans so, if she is, I'm sure she'll keep us posted.