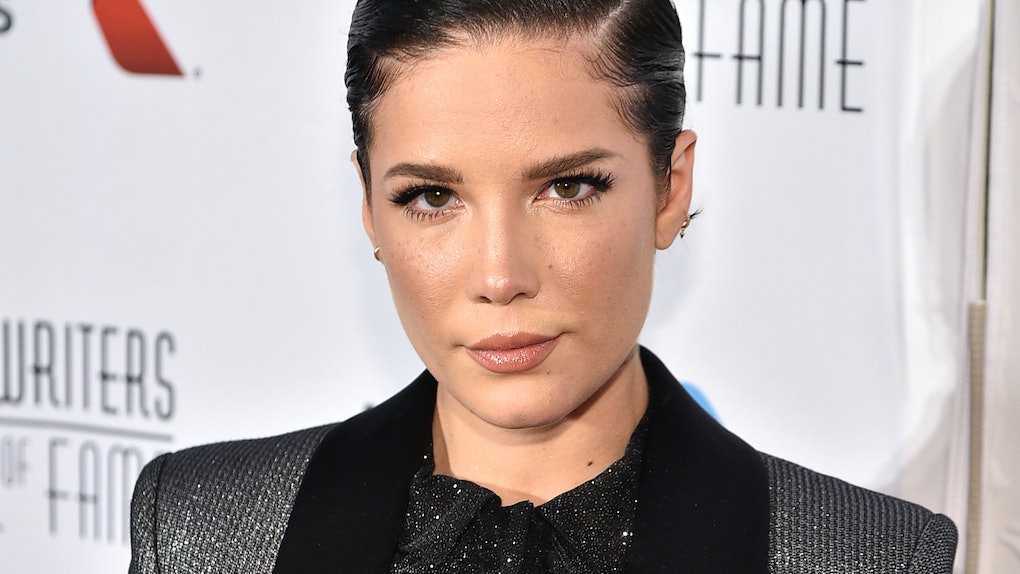 Get that homophobia out of Halsey's timeline. The openly bisexual "Nightmare" singer clapped back at an Instagram user who thinks that having queer pride is just a money-making strategy. I mean, for corporations during Pride month, totally. But for an openly bisexual artist? Nah. Halsey's response to accusations she's using the LGBTQ community shut this issue down real quick.

Halsey posted a photo from one of her shows in São Paolo, Brazil, to her Instagram on July 6, captioned "peak bi gurl evolution." The first photo showed her standing on stage, singing, the second showed her doing the same, except with a rainbow Pride flag. Girl's got pride! And she's been an outspoken advocate for the LGBTQ community for all of her career (she's literally part of it), so no one should be surprised when they see her touting a rainbow flag.

One user was, though. The Instagram user commented on Halsey's "peak bi gurl evolution" post saying, “rainbow is the new marketing strategy.”

Halsey, having none of it, commented back, "There’s been a flag in my show for 5 years. You’re just not paying attention you whiny little baby." Oof, tell 'em, Hal! The singer's fans couldn't get enough of this clapback.

"We (and i can not stress this enough) STAN," one fan said.

"OHH HONEY YOU SAVAGE," another posted.

"Beware of those who disguise their homophobia as 'people are using LGBT for money and marketing!'" they commented. "When what they really feel is, 'I hate seeing LGBT everywhere it makes me mad because I'm against it!' Don't change, bi queen."

If Halsey was really trying to use that flag as a marketing strategy, she would've posted that photo (and much more) during Pride month in June. It was World Pride. That was the time to capitalize on LGBTQ culture, if anyone was going to. She said herself that she's been touting the rainbow Pride flag at her shows for five years, regardless of whether or not it was expedient, so the accusation that she's using the LGBTQ community is pretty baseless.

She posted her own, simple Pride Instagram in June that showed a collage of her doing various things. It's a queer post because, again, she's queer! One of them showed her eating a taco. It looks like a great taco.

"Idk why I made the taco sexual. Happy pride," she said. If she were capitalizing on queerness, her Pride post would probably have been much more commercial. I'm just sayin'.

Halsey is always giving her take on things, and doesn't hold back from speaking up for something/someone when she feels it's necessary. Most recently, when Taylor Swift posted on Tumblr about Scooter Braun acquiring the ownership of her music, saying it was her "worst case scenario," Halsey (a fellow songwriter) tweeted in support of Swift's stance on the matter.

Taylor Swift is a huge reason why I always insisted to write my own music. I believed if she did it (in a way that made my teeth ache like cold water and my heart swell and my eyes leak) than I should too. Cause that’s how to make someone feel. To drag it from the pits of your heart. To offer it on a platter and say ‘take some but take kindly.’ She deserves to own the painstaking labor of her heart. She has surpassed all expectations of what any artist is capable of. She catapulted her stardom into the Milky Way.

And it turns my guts that no matter how much power or success a woman has in this life, you are still susceptible to someone coming along and making you feel powerless out of spite. It speaks volumes to how far we have to come in the music industry. The way writers are treated. How as an entertainer you are respected but as a writer you’re walked all over. Even when you are both in one single body. I am standing with her.

Props to Halsey for always speaking her mind! And for anyone who thinks she's "using" the LGBTQ community, y'all know how she feels.