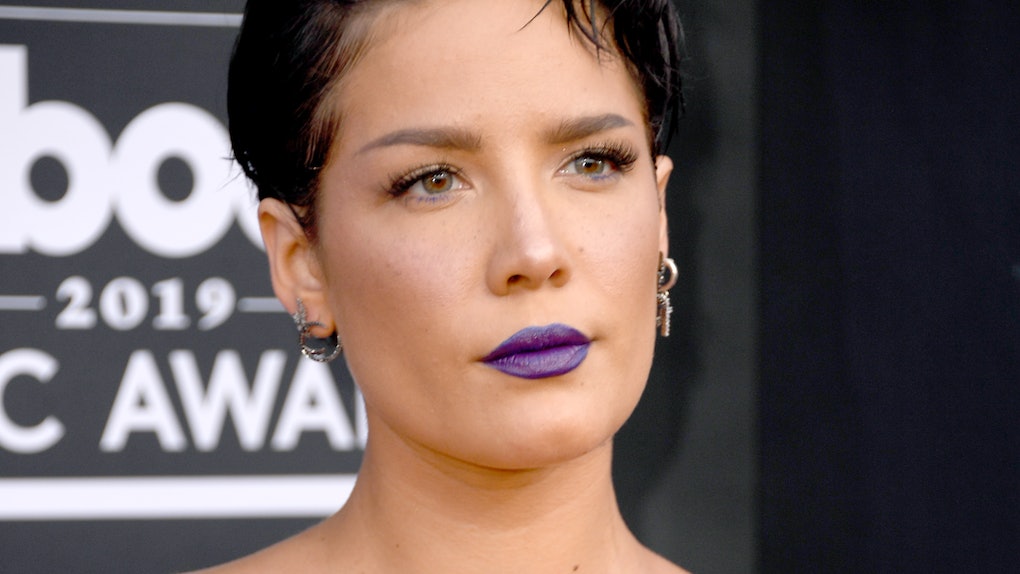 Halsey is what some may call a hair chameleon, so much so that she can sometimes appear almost unrecognizable with so many hair changes. Regardless, she always effortlessly rocks whatever color is on her head and does so beyond fiercely. Halsey's 2019 Billboard Music Awards look is no exception. The singer graced the red carpet of this year's BBMAs in a bold blue and black gown and a new black pixie cut to match.

As good as her hair looks, let's first unpack her dress, which looks straight out of an old school prom — in the best way possible. Halsey's super shiny, royal blue gown featured a band of black lace around the skirt, cut-outs on the side, a black bustier situation, a black leather belt at the waist, and a major, thigh-high slit. Phew, that was a mouthful.

When it came to her accessories, the singer paired the blue gown with black patent leather strappy heels, dainty lightning bolt earrings, several silver rings. Otherwise, she kept any other accessories to a minimum, likely to let her dress do all the talking.

OK, OK, the dress is good, but we've gotta talk about the other major part of Halsey's entire look: her new super short chop. Halsey debuted her brand new black pixie on the carpet by celebrity hair stylist Florido Basallo for Matrix, channeling the wet hair trend with tousled locks parted to the side. It's a pretty fair departure from the long black braids she was most recently seen wearing, as well as the bubble gum pink 'do she had before that.

To get her tousled wet hair look, Basallo prepped Halsey's damp hair with Matrix Total Results Miracle Creator for a little bit of added moisture, then worked a generous amount of Matrix Style Link Smooth Setter Smoothing Cream through the hair to really get accentuate the damp look. The stylist then brushed back the sides of the hair, and then scrunched and separated the top of the hair to create the tousled style. He then finished the look off with a finishing spray to lock in Halsey's final look for the red carpet.

As far as her beauty beat went, the singer rocked a holographic highlight atop her cheekbones, metallic blue eyeliner, and an indigo lip to match her dress, of course.

As mentioned earlier, Halsey is no stranger to changing up her mane. In fact, I'm not sure if I've ever seen her rock the same look twice. As we know, Halsey can rock a wig or extensions to quickly change her look like no other, and she's been spotted wearing anything from waist-grazing blue locks to long, platinum blonde strands to a light pink lob to black braids to long, fiery red waves to her own natural curls that are beyond gorgeous, if I do say so myself. Let's just say, I love this new short look on Halsey, but I will equally love whatever drastically different hairstyle she's spotted with next week.

Yes, Halsey's entire look — hair included — is fabulous as hell, but don't sleep on her for the rest of the night. The 24-year-old is set to perform "Boy With Luv" with K-Pop boyband BTS at the BBMAs, as well as her hit song "Without Me," so it's safe to say she'll break out even more major looks for the rest of the night. Even more, she's nominated for awards in two categories: Best Female Artist and Top Selling Song for "Without Me." (What can't she do?!) So if you're anything like me and are obsessed with tracking her ever-changing looks, I'd recommend keeping your eyes glued to the show to see what else she pops up on stage wearing.