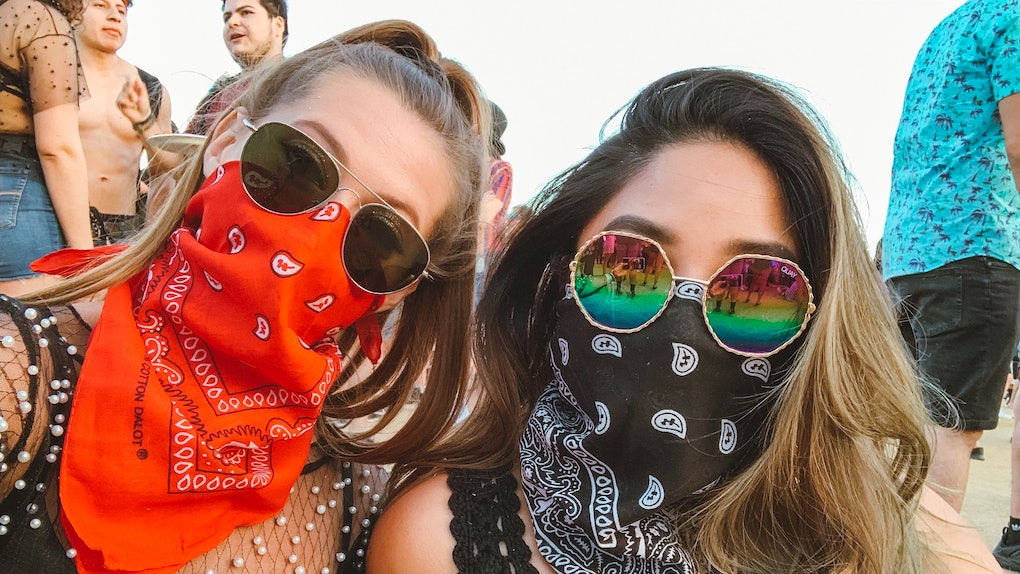 Experiencing Coachella had always been a major dream of mine. The outfits, the food, the art, and of course, the epic lineup of musicians had such an allure that made me feel like I absolutely had to be there. So when I moved to Los Angeles about seven months ago, I decided that 2019 would be the year I finally went. But I honestly didn't know where to begin. I wondered how I'd get there, how I'd get tickets or housing accommodations, and what on Earth I'd possibly wear. But going to Coachella with my best friend helped alleviate all of my worries, and ensured that my first Coachella was the most epic life-changing experience ever.

Lexi is my BFF from college, and now that we both live in the same city again, we do a lot of things together. We hang out on the reg, are each other's plus ones to work events, and we've even performed together. It's so wonderful having such a good and supportive friend in a new city with me, and for something that requires as much planning as Coachella does, she was great to have around for that, too.

She acted as my own personal hype-woman for the weekend, and got every pic I wanted to put on the 'Gram. I loved having her with me for my first Coachella experience, because there's no one I'd trust more to make it as memorable as it was.

She Was My Own Personal Hype-Woman

Lexi is my number one hype-woman in life as it is, but Coachella brought out a whole new side of our friendship. She cheered me on for anything — when I changed into my outfit, when I danced in the crowd like no one was watching, and even when I ate corn dog and cheese fries like a champ. She encouraged me to live my best life all weekend and made sure I was having fun.

She Was The Perfect Instagram Wifey For The Weekend

Let's be real: A huge part of going to Coachella is capturing those epic pictures in the desert, next to the cool art and dressed in your festival best. But it's impossible to get those great pics if you don't have someone who knows what they're doing in your corner.

Lexi is my personal photographer in much of my everyday life, but she took her skills to a whole new level this weekend. She was patient with me when I knew I wanted a certain shot, and even went back to certain spots with me if I didn't like how the first round of pics came out. I'm pretty proud of how my feed looks right now, and it's all thanks to her.

She Made Me A Little More Outgoing

Something that makes my friendship with Lexi so great is that she's the kind of person who likes to go out and dance the night away, while I regularly describe myself as a grandma. I love staying home — I'd much rather curl up in bed early than go out with my friends on weekends — so Coachella really pushed my limits.

She balanced out my "leave early to go to sleep" mentality by encouraging me to go to a few parties, even if it was just for a little bit. When we went backstage at the Do LaB stage, she dragged me onstage so we could dance with the DJ (and other fans), and take a seriously epic pic with the crowd in the background.

She Helped Style Me For The Weekend

My everyday sense of style is definitely not what you think of when you're trying to put together festival outfits (I'm a very casual dresser), and until about two days before the festival, I was still panicking about what to wear.

Lexi walked me through each of my outfits and let me text her pics from store fitting rooms to determine if each piece was worth bringing to the desert. In return, I of course did the same. (I'm not going to lie — I think we both did a pretty good job.)

The best part about having my best friend at Coachella with me was that we are often on the same wavelength, and the festival was no different. We had already sorted out a schedule of artists we wanted to see before we got there, but once we were at the festival, the schedule went by the wayside as our bodies got tired and plans changed. We were able to agree on when to go dance — which was super often — and even when we wanted to rest.

Our first night, we were so wiped from the day but really wanted to see Childish Gambino, so we found picnic benches in the beer garden next to the main stage (where it was a little quieter and less crowded), put our heads down, and took a quick power nap so we were able to last through the rest of the night. I probably wouldn't have done that had I been with anyone else, but our night was so much better because we did.