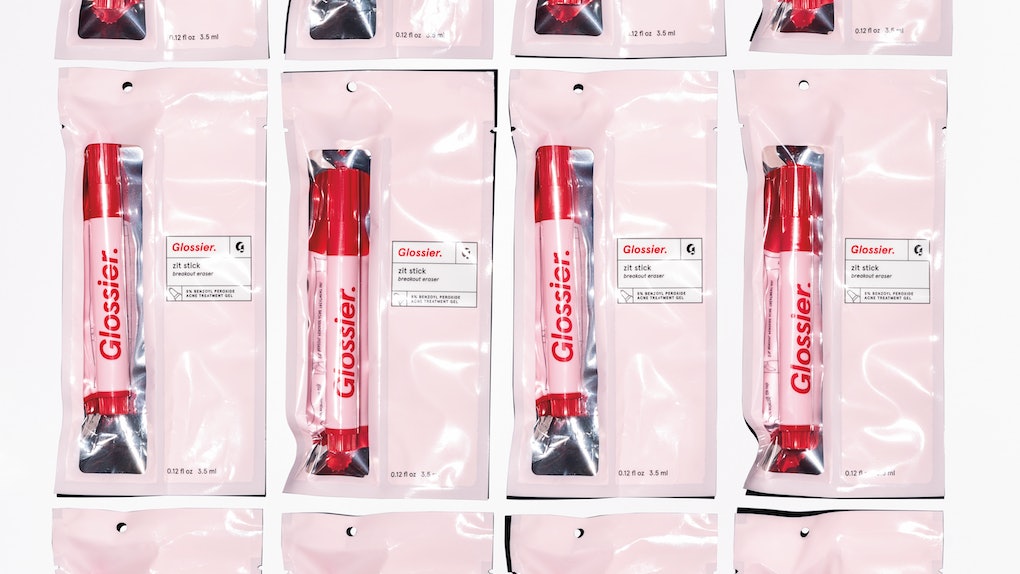 Glossier's Zit Stick Is The Pen-Sized, Pimple-Zapping Product Of Your Dreams

How many times have you been on the go and realized you have a new pimple popping up on your face but nothing to start immediately healing it with? Glossier's Zit Stick is here to save you from such future situations, seeing as it'll allow you to start stopping a breakout in its tracks the second you detect it. Bye bye, acne, you might've just met your match!

Glossier's brand motto is "skin first, makeup second," so it makes sense that the brand would eventually release a zit zapper extraordinaire. Their entire skincare line is much loved by editors, celebrities, and the like, who swear by Glossier's Milky Jelly Cleanser ($18, Glossier) and Priming Moisturizer ($22, Glossier). More importantly, these products are much loved by Glossier's global fanbase, who keep coming back for more thanks to the effectiveness and quality of the products. When your products are good, a loyal following is inevitable.

Now, back to the Zit Stick! As described by Glossier in a press release, it's "a portable, fast-acting spot treatment you can wear everywhere and apply anytime. It’s formulated with a combination of 5% benzoyl peroxide, capryloyl salicylic acid, and calming ingredients like glycerin and niacinamide so it starts to heal pimples in just three hours while still being nice to your skin." An on-the-go pimple treatment that starts working in three hours? How rad is that?

Aside from its skin-improving capabilities, my favorite thing about the Zit Stick has got to be its design. It's pen-sized and pocket friendly, meaning you can take it with you no matter where you're headed. Think of it as a Tide to Go pen, just way more effective. It features a pink tube, red cap, and red text, allowing it to look way more like lip tint or even an art supply than an incognito acne treatment.

When I first started reading about the Zit Stick the first question that came to my mind was wait, if it's meant to be used wherever, whenever, does that mean it can be used on top of my makeup? And wouldn't that cause me to breakout even more? The answers are yes and no, respectively. It can be used both over makeup and under makeup and thanks to its antimicrobial steel tip, it won't cause further breakouts. It's also a translucent treatment, meaning you won't be left with splotches on your face post-use.

All you have to do to use it is twist the pen of a fresh Zit Stick at least 16 full turns to get the formula flowing, and from there you simply click the pen three to six times to load up the rollerball with formula and then process to glide it over your zits. You can apply it up to three times a day but remember to be especially proactive about applying sunscreen while using it—Benzoyl Peroxide makes skin extra sensitive to the sun.

The Zit Stick will officially launch tomorrow on Glossier's website, with each pen retailing for $14.