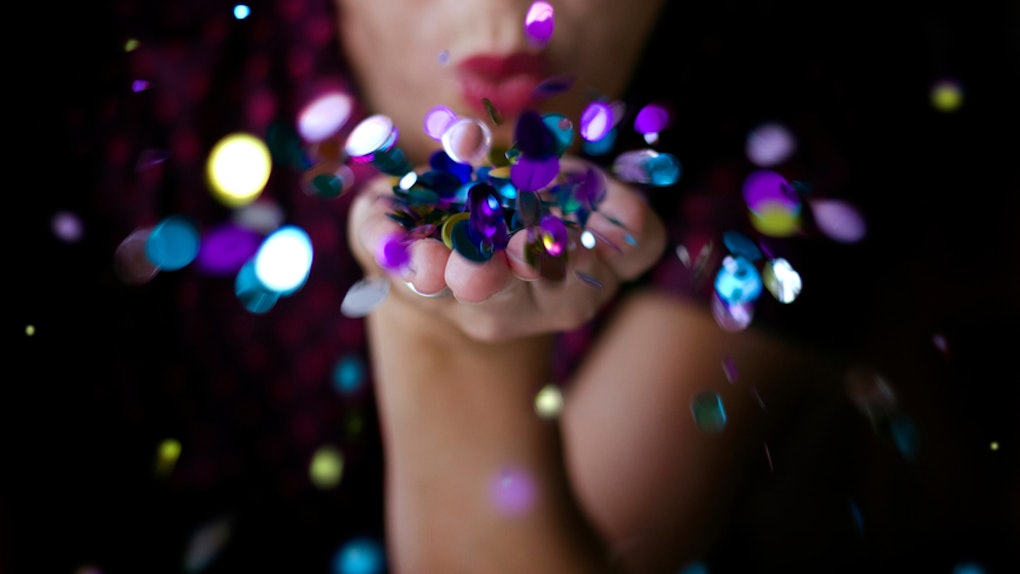 Glitter Beer Exists & I Don't Know How To Feel About It

Like most sensible human beings who grew up in the '90s, I am (quite shamelessly) an avid fan of glitter. Even though — in no way — is it easy to clean up or get rid of, it's one item that I will continuously and diligently stock in my extensive library of crafts and makeup. While glitter has lately been making its way into our digestive tracts through the ever-expanding world of food and drinks, it's kind of unreal that glitter beer now exists. And while you'd think it'd be hoppy beverage of my dreams, I'm still not entirely sure how I feel about it.

Throughout my cherished time in pre-k, (ah, the good old days), I watched a lot of poor, unfortunate souls eat anything from Elmer's glue to crayons... and they received some pretty hardcore penalization — time outs and indoor recess were just a few I can recall. And although my love for glitter always made it look like a pretty enticing snack, I never indulged, in fear of punishment. Growing up knowing that glitter is inedible has made glittery coffee drinks, as well as unicorn cupcakes and whatever else is entering the glittery food market, seem untouchable to me — and the fact that it's wiggled its way into beer is kind of unthinkable. It does look pretty, though, and I'm not totally and utterly opposed to giving it a shot.

According to Munchies, glitter beer has debuted at some major breweries like Ska Brewing, in Colorado, Three Weavers Brewing Company, out in California, and at Bold Missy Brewery, down in North Carolina. I'm guessing a lot of my fellow young Brooklyn neighbors are eagerly awaiting glitter beer to appear in some neighborhood bodegas, but I'm relatively positive that won't happen in our lifetime; I'm thinking Modelos and Rolling Rocks are going to remain as bodega staples.

One reason glitter beer might not appear in all of our favorite breweries, though, is because glitter is apparently really hard to clean out of brewing equipment, according to Munchies. While it's always hard to wash off our faces the morning and out of every single damn crevice after a night out, I guess it sticks to machinery too... what are the odds?

Some people, like myself, are feeling a little bit skeptical as to how noshing on sparkles affects your bod, but according to Eater, if it's considered "edible," (not to be confused with "non-toxic") it's totally fine to eat. Looking at the ingredients, it's mostly made with different kinds of sugars and starches, and Eater says it can be used liberally, on pretty much anything you're eating. Eating a steak? Glitter it up. Whipping up hummus? Make it glam. Finding out my body will be fine after ingesting copious amounts of food-grade glitter is really making me feel a whole lot better about indulging on a glitter beer.

Certain female brewers are loving the glitter beer trend, because it totally crushes the masculine, male-dominated system of craft beer, according to Beth Demmon at Munchies. And if you know me at all, I'm all about that, man. I respect it.

Minocqua Brewing Company's head brewer, Erica DeAnda, told Munchies that both men and women alike are fans of the glitter beer, and she noted that adding something that she finds pretty shouldn't be considered "gimmicky," or "selling out."

Whether or not eating glitter seems really bizarre, it does look dope as heck in a pint, and, most importantly, it puts a stereotypically girly twist in a patriarchal field. I could be honestly be down for some glitter beer, like, right now... it's gotta be glittery happy hour somewhere.