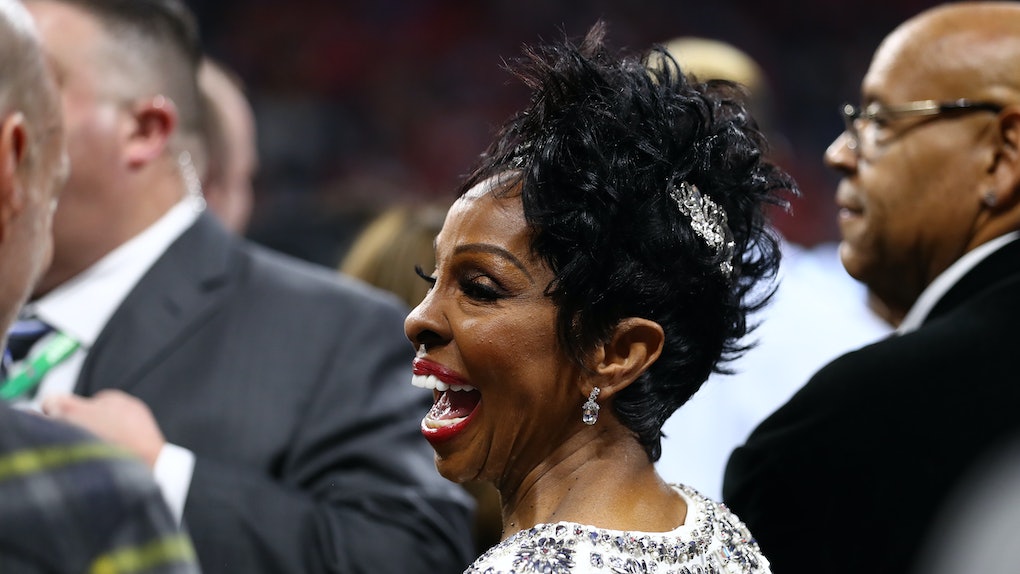 Well, friends, the day has finally come. The day you may know as the Super Bowl is the day I know as many other things. The day I O.D. on every greasy appetizer known to man. The day forever etched into my mind as the anniversary of the announcement that Kylie Jenner had given birth and singlehandedly ended my life. And the day that I get to watch what will be one of my all-time favorite musical performances: Gladys Knight's National Anthem performance at the Super Bowl.

If you don't know who Gladys Knight is, first of all, I'm so sorry for you. And second of all, how dare you?! (Kidding.) A breakout star of the '60s and '70s, Knight is well-known as the "Empress of Soul." Hailing from Atlanta herself (the setting for Super Bowl LIII), the eight-time Grammy nominee was the lead singer of Gladys Knight and the Pips, and she is the melodic songbird behind some absolute classics, including "Midnight Train to Georgia," a version of "I Heard It Through The Grapevine," and "Best Thing That Ever Happened To Me." In short, the woman is a freaking legend, and both she and her present Super Bowl National Anthem performance should be regarded as such.

Taking to the stage before the game commenced, Knight wowed everyone in the audience with an incredibly soulful performance. No, really, peep these photos of her looking like a complete freaking angel in white, and tell me you don't have chills. I'm not crying, you are.

For the performance, Knight truly looked as if she had descended from heaven to save us all with her voice. She wore a knee-length, stark white dress with full hanging sleeves and sparkling silver stone embellishments all along the neckline. She paired the dress perfectly with glittering, kitten-heeled ankle boots; small, dangling diamond earrings; and sparkling silver hair clips. (You best believe Knight is already on top of one of 2019's biggest hair trends.)

Of course, Knight's outfit is minuscule in comparison to how stunning her rendition of the National Anthem was. ICYMI, you can watch Knight belt out the song below and promptly join in with everyone on Twitter freaking out about it:

With her performance of the National Anthem, Knight joins the ranks of a slew of talented musicians to grace the Super Bowl stage for the same honor, including Alicia Keys in 2013, Lady Gaga in 2016, Luke Bryan in 2017, and, most recently, Pink in 2018. Knight's performance tonight is also the precursor to several other sets, including halftime performances by Maroon 5 and Travis Scott.

As the New England Patriots face off against the Los Angeles Rams (who utterly robbed the New Orleans Saints of a well-deserved Super Bowl spot, IMHO #WhoDat) in Super Bowl LIII, I stand by what I'm sure is a hot take: I'd really love if these sweaty men would vacate the field so we could turn the Super Bowl into the Gladys Knight concert she and we all rightfully deserve.