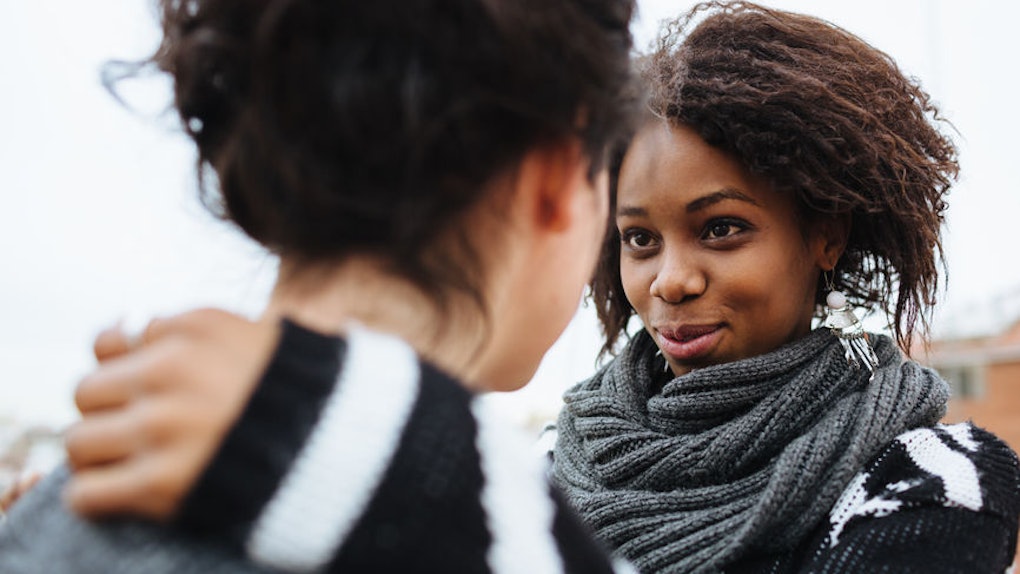 Give Your Best Friend This Dating Advice, Because It's Literally Life-Changing

I have a good friend who I adore for her honesty. The more time I spend with her, the more empowered I feel to speak my truth in any given scenario, and my love life is no exception. She’s one of these people who will always tell it like it is, whether or not she thinks her opinion will be well-received. As far as dating advice to give your best friend, she’s got it in spades, and I feel like I’m always going to her when I need some perspective.

She recently told me about a first date she went on with a guy from a dating app. They had been talking online for several days and she felt like he wasn’t sharing anything genuine about himself. Naturally, that didn’t sit well with her. Twenty minutes into their first date, she straight-up told him that she thought he was afraid of vulnerability — and shockingly, he took it pretty well. I think he found her honesty sexy, and they ended up having a really deep and meaningful conversation for the rest of the night.

It’s a funny story, but it got me thinking about how I often beat around the bush before I get to the core of what I want to say to someone, especially in that early dating phase. How refreshing would it be to just go into a relationship feeling unapologetically like myself? Now, I try to channel this authenticity every time I’m meeting someone new. Because my own bestie has changed my life when it comes to dating, I wanted to ask other women about the best advice they’ve received from their friends — and boy, did they deliver. Buckle up, because there is some serious truth coming your way!

Let go of the past. Not all boys are the same and won’t treat you the same. Start fresh.

I've been so over dating lately and not giving people a chance, so my friends keep telling me, 'Even if you don't feel a spark or feel totally sold after the first or second date, keep going until you simply don't like it anymore, because you really never know and it's OK if it takes time.' It's encouraged me to keep trying and putting myself out there!

Do What You Need

'No' is a complete sentence. You do not have to explain yourself or your choices and your 'no' needs to be respected.

Materialize your future by putting yourself out there — meet people, take dates with people you would never be interested in, give people second and third chances, go on dates and never see people again. Look at everyone as potential friends first, and if it works out for something more, great! But you need to tell yourself and believe that you will meet someone, you are happy waiting, and you are worth waiting for.

I was dating guy after guy in college, and my good guy friend gave me some really harsh advice that I wish I had taken but didn’t. He told me to stop worrying about always having a guy to text.

I was once complaining to my best friend/roommate about how annoying it was when guys invited you up to their apartment 'for just one drink' and then tried to push you into hooking up. She came up with a brilliant rule: Going forward, she and I would only go up to guys' apartments if we actually wanted to hook up with them. It was such a simple solution and really changed the way I dated. Plus, it felt like we were confronting the situation together, which meant we both had a built-in support system for navigating these confusing dates and hookups.

Best advice I got was, ‘Imagine you’re trying to make a friend instead of a future partner because it takes the pressure off.'

How truthful is all this advice?? I need to print it out on my mirror for days when I’m feeling down or confused. Sometimes the best thing a friend can do is help you get outside your own head, and it’s safe to say these words are going to make me think about my own dating life differently. BFF advice isn’t always easy to hear, but that’s what makes it so necessary — the people who know you best always seem to know just what to say. Shoutout to our besties for keeping it real.