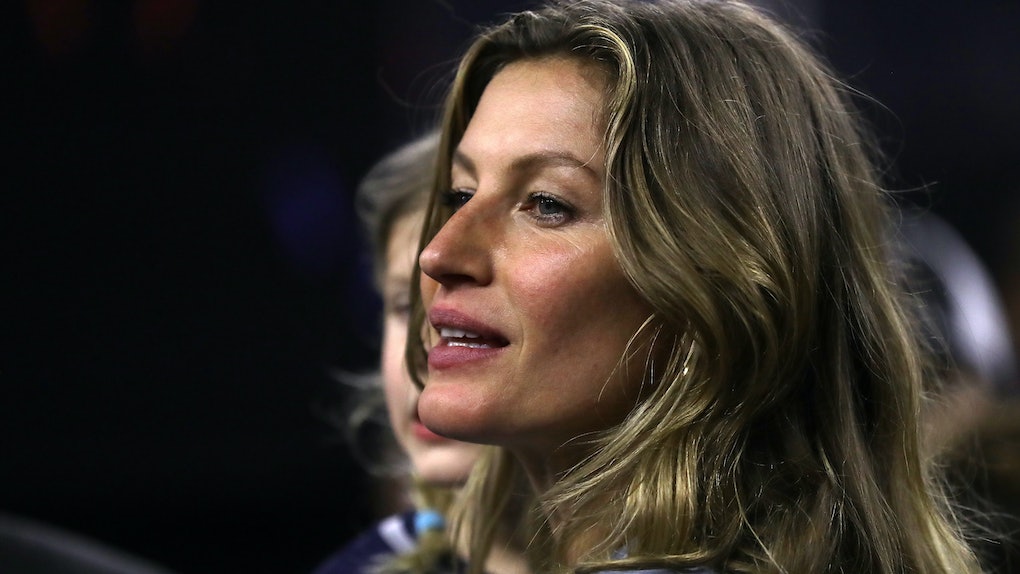 The Super Bowl is, like, a huge deal. Therefore, it's easy to assume NFL players' loved ones are in the crowd showing support. Its obvious that the Patriots' quarterback has a fan squad, because Gisele Bundchen Cheered on Tom Brady at the 2019 Super Bowl in the cutest way possible. She didn't just throw her hands in the air or blow her boo a kiss from the crowd. No, no — she did much more than that. Are you surprised, though? Their marriage is total #goals, and it's becoming more and more clear with each game that she will always support her husband's endeavors.

So, what happened? How did Bündchen show her support this time? If you missed the swoon-worthy moment on live TV, don't fret — it's all over Twitter for you to admire (obviously). The adorable clip shows Bündchen literally jumping out of her seat when Brady makes a touchdown. With a smile on her face, she turns around and high fives everyone sitting behind her. How freaking cute is that? She literally jumped for joy during her hubby's big moment, and I can't help but feel happy for them.

Trust me: I'm not a fan of football. However, I am a fan of love — and that "proud wife" moment made me smile. Keep being cute, guys.

That's definitely not where the cuteness of Super Bowl 2019 started, though. On Saturday, Feb. 2, Bündchen posted a downright adorable Instagram photo of herself hugging Brady inside the stadium. Her caption said, "I got your back!" with a romantic red heart. Based off of her reaction during his big moment of the game, it's obvious that she wasn't lying.

Bündchen isn't the only family member who supported Brady on his big night. The couple's daughter, Vivian Brady, was also pictured on Bündchen's Instagram wearing her dad's jersey on Feb. 3. The caption says, "Let's go papai !!! Let's go pats !!!" with one red heart and one blue heart. In other words, Bündchen (and her daughter) were cheering Brady on before the game even began.

As you could probably assume, this year's Super Bowl certainly isn't the first time Bündchen was shown in the crowd. In fact, during Super Bowl 2018 (where the Patriots played the Eagles), Brady's wife was shown in the audience drinking wine and watching the game. I don't know about you, but that sounds like a delicious (and supportive) way to spend the Super Bowl... don't you think?

Anyway, it's obvious that Bündchen's support this year paid off, because the Brady won his sixth Super Bowl ever on Feb. 3, 2019. (How about a round of applause?) In case you weren't watching the game, here's what happened: The New England Patriots played against the Los Angeles Rams, and ended up winning the game with a score of 13 to 3.

Even if Brady didn't win the event, I'm sure Bündchen would have been just as proud as him. Between her nonstop support and enthusiastic pride for the Patriots, it's obvious that she has the team's back.

More like this
Prince Philip, The Duke of Edinburgh, Has Died At The Age Of 99
By Noelle Devoe
Here's Why EXO's BAEKHYUN, CHANGMO, & Raiden's "Runner" Is The Perfect T1 Theme Song – EXCLUSIVE
By Michele Mendez
Sofia Richie & Elliot Grainge Became Instagram Official With The Cutest Post
By Candice Jalili
Stay up to date