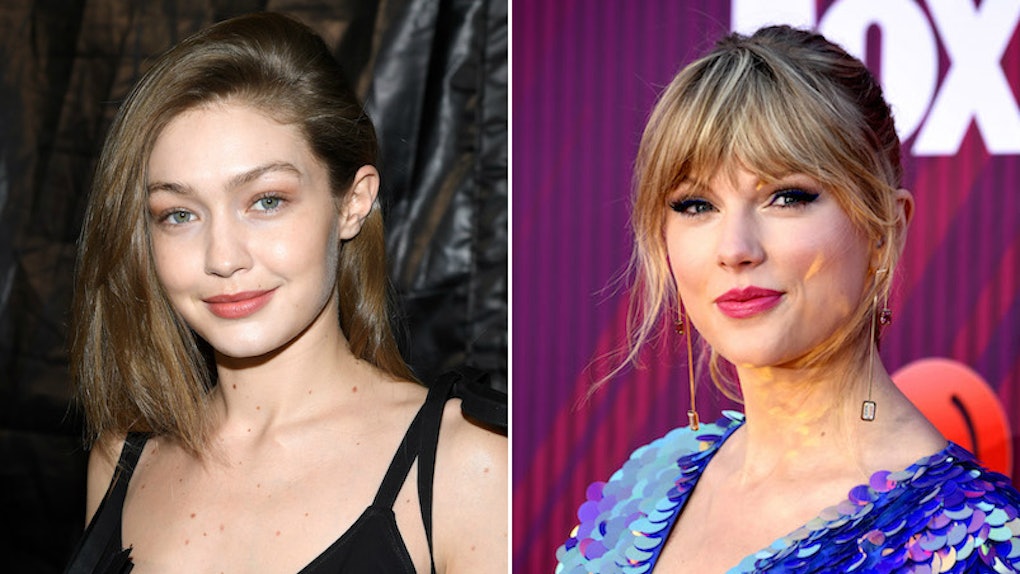 I love nothing more than finding out two celebrity friends really are as close as you want them to be in real life. Such is the case with world supermodel Gigi Hadid and pop-star Taylor Swift. The young women have repped each other's squads for a while, but to be honest, it's not that common to see them together IRL. And, it seems like they speak about each other even less. For these reasons (plus a slew of other fangirl stuff) Gigi Hadid's comments about Taylor Swift's songwriting are squeal-worthy. According to Hadid, Swift really is as wise and emotionally intelligent as her songs suggest, which is just what Swifties suspected.

Hadid, 23, is a few years younger than Swift, who is almost 30. According to Hadid, she grew up listening to Swift's songs and was a fan way before they met. I personally first put them together when Hadid graced the star-studded music video for "Bad Blood" in 2015. To jog your memory, Hadid played the role of "Slay-Z," the compact spike-throwing, leather-wearing warrior in Swift's boot-stomping army. Since then, their friendship has apparently raged on. Today, Hadid continues to fangirl in Swift's impressive concert crowds and even sat down with Vanity to gush about her famous friend.

One thing Hadid pointed out was what it's truly been like for her transitioning from anonymous T-Swift fan to an IRL friend. She said, "An amazing thing about my friendship with Taylor has been that she is a songwriter that I've connected to through my childhood into my adult life, and becoming friends has given me an insight into the mind that creates those lyrics. She writes words that people experience but can't put into words themselves."

Hadid also gave fans some behind-the-scenes details of what it's like hanging out with Swift before her shows. In total, she's attended 10 of Swift's concerts between her 1989 and Reputation tour, and thanks to Swift's generosity, she never had to pay. "I would totally buy [the tickets] but Taylor is very generous," she said.

I would go lie on her couch while she starts hair and makeup, and then I'd be in the crowd. I was like, 'How are we both just chilling, and now I'm a little tipsy, dancing at your concert and you're up there in a glittery suit?' It's an interesting duality to experience in a friendship, because I love her and cherish her as a friend. But I’m also her biggest fan.

Like many Swifties, Hadid looks to Tay-Tay as a source of empowerment. "It never gets old," Hadid said. "Because I think seeing the woman being able to own what she's been through, stand up, write songs about it, be honest, put her heart out there and through all that still be connected to people — that is amazing and it's empowering."

If an interviewer asked Taylor Swift, I can only assume she'd share a similar sentiment about Hadid. Swift's kind of made gushing about her friends her thing over the years.

Next time you guys get brunch, hit me up. I can also rock heels that make me eight feet tall. I'll fit right in.