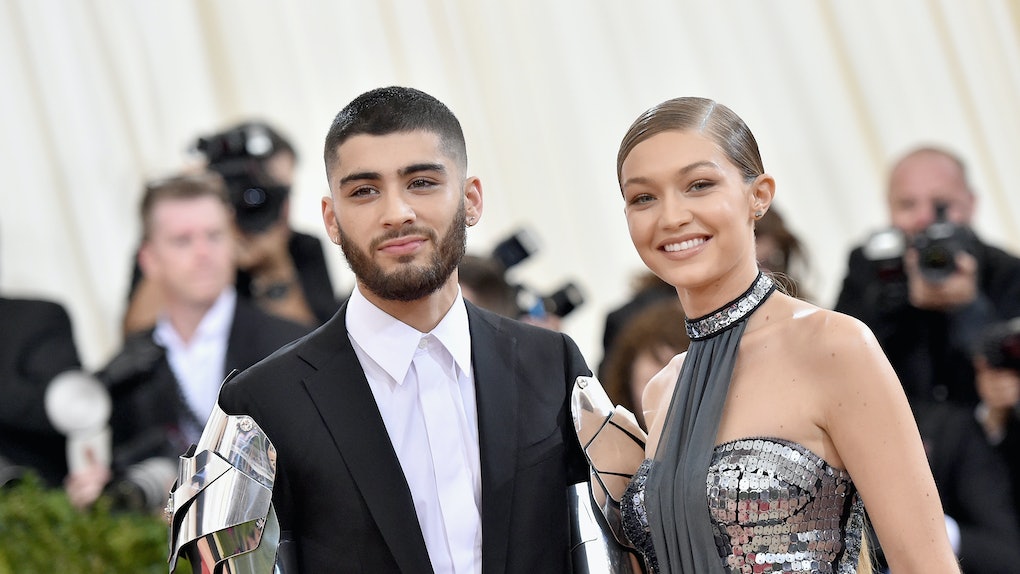 One of Hollywood's biggest "It" couples is taking a major step in their relationship. Gigi Hadid and Zayn Malik are having a baby. TMZ and Entertainment Tonight each separately confirmed the reported news via sources on April 28, and Hadid confirmed the news herself in an interview on The Tonight Show with Jimmy Fallon on April 30. “We wish we could’ve announced it on our own terms," she told Fallon, "but we’re very excited and happy and grateful for everyone’s well wishes and support."

Shortly before Hadid's confirmation, her mother, Yolanda Hadid, reportedly confirmed the pregnancy to the Dutch publication RTL Boulevard on April 29. According to Us Weekly, she told them she's “excited to become [an] Oma in September" and "feel[s] very blessed.” Yolanda's team did not respond to Elite Daily's request for comment on her reported statement to RTL Boulevard.

Now that the news is confirmed, Hadid and Malik are focusing on cherishing their journey as they quarantine together at her Pennsylvania family farm. "It's a nice silver lining to be home and together and really experience it day by day," she told Fallonduring her Tonight Show interview. Check out the whole interview below:

According to TMZ, Hadid is five months pregnant, but the sex of the baby is still unconfirmed.

According to Entertainment Tonight, prior to confirming her pregnancy, Hadid had been trying to keep things super private. "Gigi has kept the secret close to her family and friends for a while as she’s only a few months along," ET's source claimed. "Once Gigi and Zayn got back together at the end of last year it was like they never skipped a beat and knew what they had was special. The couple and their families are overjoyed."

Keeping her rumored pregnancy secret probably wasn't too challenging for Hadid before the news leaked, as she is currently quarantining.

For Hadid's 25th birthday on April 23, she posted several photos celebrating her big day with Zayn, Bella Hadid, and other family members by her side. "Had the sweetest day celebrating my 25th birthday with my quarantine family, who made it so special for me, along with all the love I felt from all over the world!" she captioned her post. "Thank you to everyone for the birthday messages, I carried you with me yesterday!!"

Hadid and Malik started dating in late 2015, and after five years of on-and-off dating, this rumored pregnancy news is a happy surprise for Zigi shippers who have been rooting for the couple since day one. Shortly after news of her reported pregnancy hit the internet, Gigi and Zayn both became top trends in the United States on Twitter.

Congrats on your growing family, Zigi.

This article was originally published on April 28, 2020