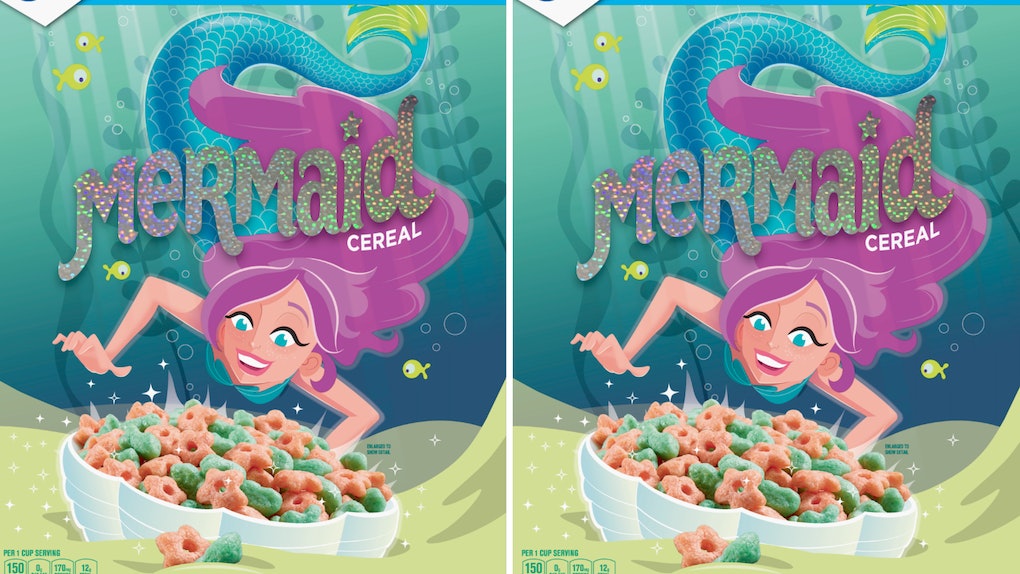 If you're a fan of breakfast food, fruity flavors, and mermaids, I've got some pretty good news for you. A new cereal that fits all those categories will be hitting shelves just in time for summer 2019, and it sounds seriously delicious. General Mills' new Mermaid Cereal comes in the cutest little shapes, and the packaging will make you want to try it out ASAP.

General Mills' new Mermaid Cereal is hitting shelves in June 2019, per an email from the brand to Elite Daily, and there are so many reasons to try it out, starting with the super cute packaging. The underwater-themed box is a light green and teal blue and depicts a purple-haired mermaid swimming toward a bowl of cereal. The bowl on the front of the box contains star-shaped and tail-shaped orange and teal corn puffs, and the word "mermaid" is written in a sparkly, foil-colored font, really giving the whole box an enchanted feel. According to press materials sent to Elite Daily, the Mermaid Cereal itself tastes like orange and pineapple fruit flavors, and it features a fruity milk finish for the perfect combination of sweet and smooth. The mid-size box of Mermaid Cereal retails for around $3.99 while the family size box costs a buck more, making it $4.99.

Though the cereal is mermaid-themed, it's worth noting that General Mills' Mermaid Cereal is not related to Disney's The Little Mermaid. But anyone who's a fan of the cereal will probably be able to attest to the fact that it's just as magical.

The Peanut Butter Chex is General Mills' new gluten free Chex cereal made with real peanut butter. Press materials sent to Elite Daily describe the cereal as "creamy" and "delicious" and suggest that fans can enjoy Peanut Butter Chex by the bowl, in a snack mix, or as peanut butter muddy buddies. Like Mermaid Cereal, Peanut Butter Chex hit shelves nationwide beginning June 2019 and retail at $3.59 for a mid-size box and $4.89 for family size.

General Mills' third release of the summer is Nature Valley Oats and Dark Chocolate Crunchy Granola, a granola made with 100% whole grain oats and rich dark chocolate. This new product, available starting June 2019, can be enjoyed as a granola cereal, can be used to top off a yogurt parfait, or can simply function as a standalone snack. You can snag a bag at grocery stores nationwide for around $4.49 for a 16-ounce pouch.

With this ever-growing list of products, it's seems hard not to incorporate a new cereal or granola into your breakfast routine. Happy eating!