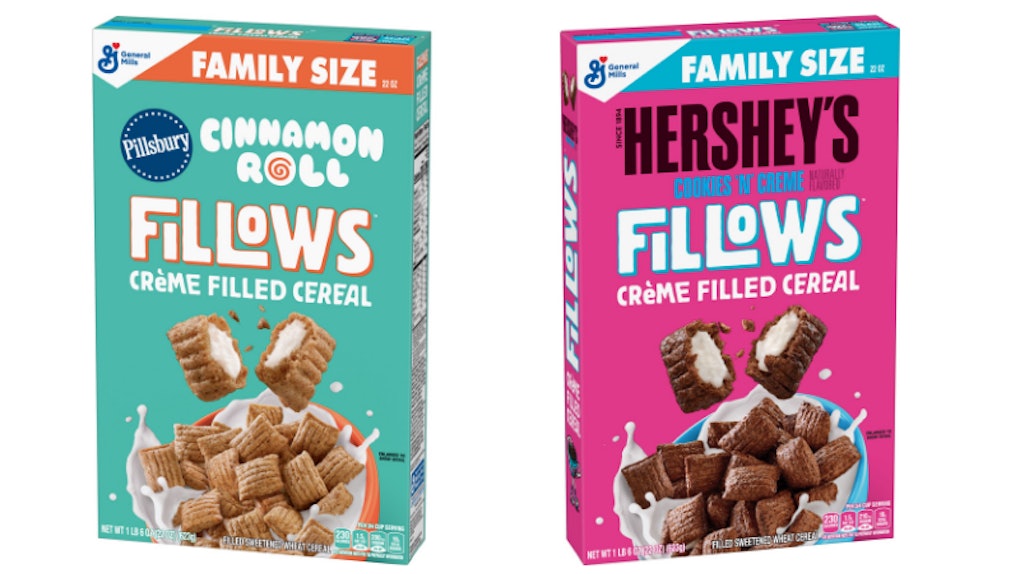 If you're like me and the prospect of satisfying your sugar cravings first thing in the morning is enough of an incentive to make you stop hitting the snooze button, you're in luck. Adulting is hard, y'all, which is why you'll want to check out these Pillsbury Cinnamon Roll and Hershey's Fillows Cereals to keep those morning scaries at bay in the sweetest way possible. According to a General Mills rep, both of these tasty offerings will be at Walmart starting the week of Monday, May 20, so get ready to stock up on a socially acceptable way to eat dessert for breakfast.

Now, you might be wondering exactly what a "Fillow" is, and I'm happy to report that it's a pillow-shaped piece of cereal that's stuffed with flavored icing (in this case, the flavors of a cinnamon roll or cookies 'n' crème). According to press materials, each of these goodies delivers "a crunchy shell with a burst of crème flavor in every bite," meaning that you'll be savoring the signature creme filling of a cinnamon roll or a serving of cookies 'n' crème with each spoonful.

TBH, I'd say the addition of milk is totally optional in this case, because each of these Fillows varieties look like they'd be a tasty snack on their own, thanks to what I can only imagine is an ideal crunch-to-icing ratio. According to a General Mills rep, both Hershey's Cookies 'n' Crème and Pillsbury Cinnamon Roll Fillows are currently available at "select stores" for just $3.98 for a Family Size pack, and they will be heading to Walmart locations starting the week of Monday, May 20. Unfortunately, the Fillows line won't be receiving a more comprehensive rollout until the fall, so I wouldn't be too worried if you don't see a box of these bad boys on your grocery store shelves just yet.

I like to divide people into two camps when it comes to dessert preferences: chocolate lovers and foodies who'd rather satisfy their sugar cravings with something else. Luckily, you have the option to do either with these two Fillows options.

So, what exactly do these bad boys taste like? According to the Snack Cellar, the blogger previously described a snackable version of the Hershey's Cookies 'n' Crème Fillows as tasting pretty similar to Cocoa Puffs. The blogger wrote:

The chocolate cereal pieces are closer to the taste of Cocoa Puffs than Oreo cookies, though maybe a bit more muted in flavor. The filling provides peeks of sweetness, but is too easily lost against the chocolate pieces.

Unfortunately, I've yet to see someone review the Pillsbury Cinnamon Roll Fillows, but I'm guessing it's a tasty (and way easier) alternative to making your favorite doughy swirls of cinnamon and icing in the mornings. One thing's for certain: I'll definitely be putting my Cinnamon Toast Crunch habit on hold while I sample these new bites and shamelessly eat dessert for breakfast without leaving my bed.

Again, there's a chance that both of these Fillows might already be at your local grocery store, so you might actually be able to start blessing up your mornings in a big way, like... right now.