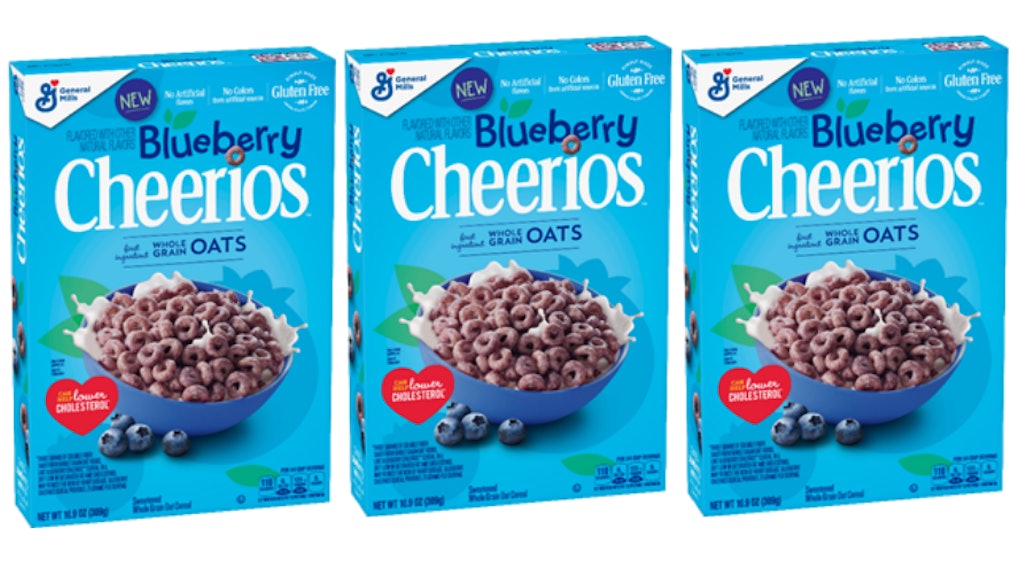 Hot take: I'm not big on breakfast. That's not because I don't like to eat breakfast foods, but truth be told I've got a lot going on when I wake up in the morning. My No. 1 priority is starting a pot of coffee — and some days, I'm just not all that hungry until a little later in the day. However, Cheerios' Blueberry-flavored cereal for spring 2019 has me rethinking my morning breakfast plans. The new flavor sounds like a delicious way to start my day.

Blueberry Cheerios are coming to a store near you very soon and they won't be going anywhere. The new flavor is a permanent addition to the Cheerios lineup, according to a press release from General Mills sent to Elite Daily. So, the next time you're at the grocery store, head on over to the cereal aisle and take a look for a bright blue box of Cheerios. The new berry-inspired cereal will begin hitting store shelves at the end of this week, per General Mills.

Technically, the end of the work week is Friday, April 12, but don't panic if you can't find them by the weekend. Just take heart in knowing that Blueberry Cheerios are coming, and you'll be able to snack on the tiny, fruit-flavored bites in no time.

The new, gluten-free Blueberry Cheerios are available at retailers nationwide, according to the company. You should be able to find them at stores that already sell other General Mills products. I took a quick look at both the Target and Walmart websites but didn't see any signs of the cereal — yet.

The new Blueberry Cheerios come in two sizes. Per General Mills, the 10.8-ounce box retails for $3.99, and the larger, 19.8-ounce package of Blueberry Cheerios goes for $4.99. For just $1 more, the latter is great for sharing with friends or storing in your office desk drawer for when you need a quick snack. Just keep in mind that these are merely suggested retail prices. Meaning that the overall cost may vary depending on where you live and what store you shop at.

Since the Blueberry Cheerios are so new, I haven't tried any yet to know exactly what they taste like. I do love blueberries, though. According to General Mills, Blueberry Cheerios are made with real blueberry puree and other natural flavors. Basically, this cereal sounds like it tastes pretty close to the actual fruit.

So, back to the part when I said I wasn't big into breakfast. Well, I'm still not, but these Blueberry Cheerios don't have to be just for breakfast. I would totally throw these in a snack bag and keep them in my purse for when I start to get hungry later in the day.

What I love about this new flavor of Cheerios is that it's made with actual blueberries. I love the sweet taste and crunchy texture of the tiny berries. I know Blueberry Cheerios aren't a substitute for the actual fruit, but I'll be snacking on this cereal for the near future. Yum.