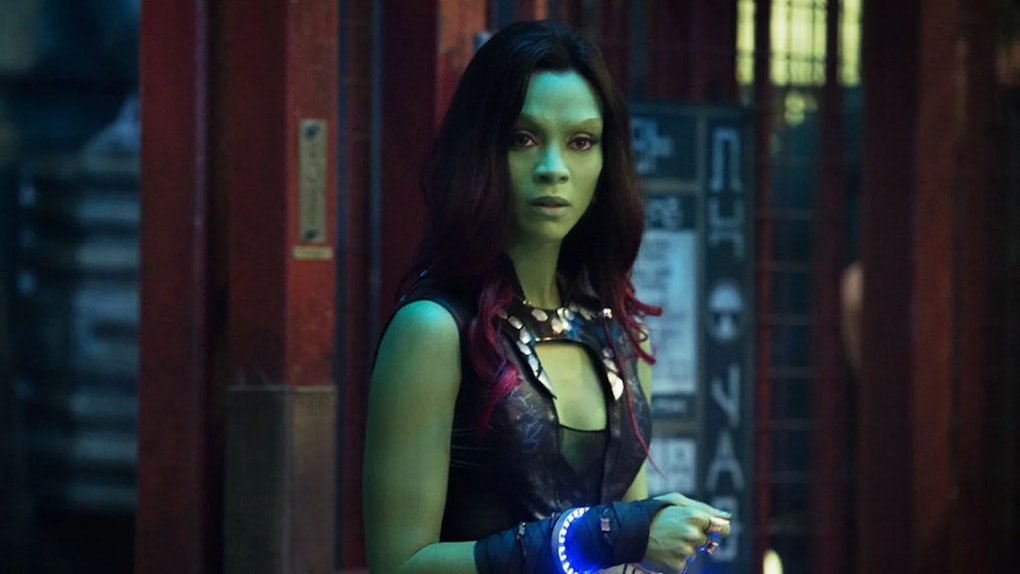 Gamora & Thanos Have A Complicated Past & The 'Avengers: Infinity War' Reveal Is Intense

Now, Gamora is usually a total badass, but Infinity War saw her acting a little more subdued and emotional. When the Guardians picked up an adrift Thor in their spaceship, they revealed to him that Gamora had an intimate connection to Thanos. Quill shared that he was her father, but when Thor's reaction was unreadable, Quill quickly corrected himself and said he was really her stepfather. In true Marvel fashion, the serious moment turned a little humorous, with Thor sympathizing with Gamora over their equally messy families.

The brief moment tied in later on, when a flashback of Gamora's childhood began. When she was young, she and her mother attempted to hide from Thanos' army of Chitauri invading the land of their species, the Zen-Whoberis. But in the craziness of the moment, Gamora and her mother were herded outside alongside with the rest of their people, and Gamora was separated from her mother and ended up in the arms of Thanos.

Now, I know that Thanos is evil and murderous and whatnot, but he also seemed... tender in this moment with little Gamora. As the Chitauri cronies began to massacre half of the population, Thanos took pity on Gamora, keeping her turned away from the bloodbath and distracting her with the story of his perfectly balanced dagger. Gamora, seemingly captivated, went off with him after the Chitauri had murdered most of her people, and Thanos proceeded to raise her as an assassin.

Gamora clearly grew up in a tough way, but hearing about this origin story almost humanizes Thanos. Of course, I'm not going to start whipping up Team Thanos shirts any time soon, but this moment was clearly a new insight into the character and his motives behind adopting Gamora as his own.

The hints that we would learn of the pair's backstory were always there, as Gamora is heard in a voiceover in the film's final trailer, describing her perception of Thanos throughout her life:

The entire time I knew him, he only had one goal. To wipe out half the universe. If he gets all the Infinity Stones, he can do it with a snap of his fingers.

Learning about these details was only the beginning of Gamora's heartbreaking Infinity War story. When she and the other Guardians attempted to dominate Thanos, Thanos used the Infinity Stones he had to his advantage, manipulating the situation and kidnapping Gamora in the process. So began quite the awkward father-daughter road trip through the universe as Thanos continued his quest for more Infinity Stones.

The pairing was never going to end well, but I don't think anyone anticipated how badly it would turn out. When Gamora spilled the whereabouts of the Soul Stone and she and Thanos traveled to find it, Red Skull revealed that one has to sacrifice a soul for the Soul. Again, going back to Thanos being humanized, his realization that he would have to sacrifice Gamora for the Stone totally seemed like he was questioning his intentions.

As we saw, any questioning quickly faded, and Thanos tossed Gamora over the edge of a cliff in order to retrieve the Infinity Soul Stone. The last we saw of her, her body was sprawled motionless over rocks. No, I'm not crying, you're crying.

I'm still not OK about this ending, and I hope that Quill or at least the other Avengers get a chance to avenge Gamora's death in Avengers 4.