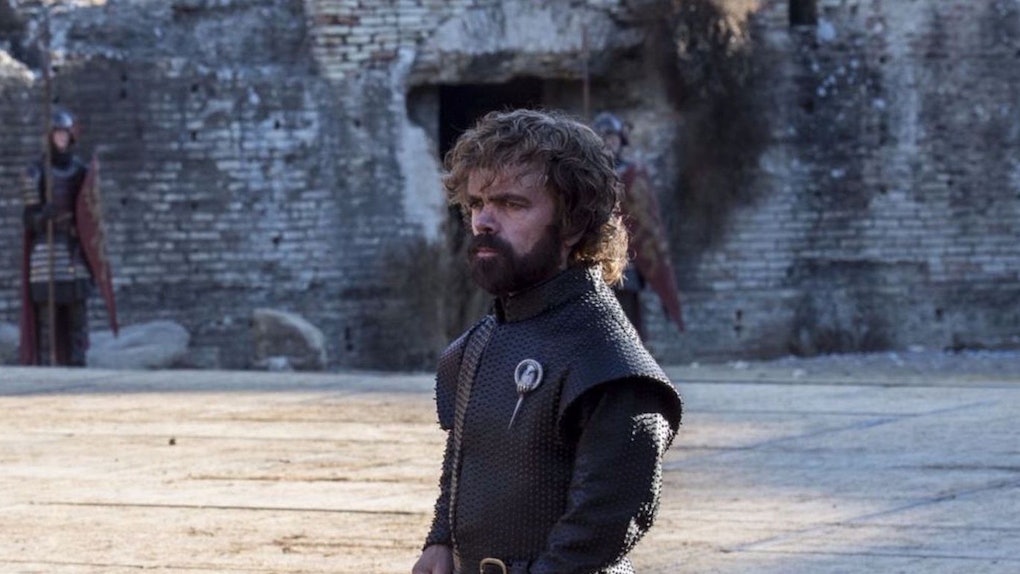 'Game Of Thrones' Fans Spotted A Water Bottle In The Series Finale, So Brace Yourself

For the second time this season, Game of Thrones unwittingly turned into "Game of Misplaced Beverages." A couple weeks ago, the internet exploded after eagle-eyed fans noticed an errant coffee cup sitting on a table in Winterfell, and now, Game of Thrones fans spotted a water bottle in the series finale. The blunder has been making waves on Twitter, as several fans call out the show's second production error from this final season.

Spoiler alert: This post contains some spoilers from the Game of Thrones series finale, "The Iron Throne." The new beverage blunder came about halfway through the finale episode, during the scene in which Tyrion Lannister is brought in front of all the remaining rulers of Westeros. The scene is pivotal for the show's ending, as Tyrion manages to convince everyone to elect Bran Stark to be the new ruler, and Sansa Stark declares the North as its own kingdom with herself as its ruler. But while all of this was going down, some fans noticed that there was a plastic water bottle visible during this council meeting. Fans on Twitter immediately began to point out that a water bottle is actually visible behind Samwell Tarly's leg in several shots. The water bottle can be seen shortly after the 46-minute mark in the finale episode.

Shortly after the episode aired, fans began to post about the stray water bottle on Twitter, and the second misplaced beverage mistake garnered a whole lot of attention online:

Not only that, but fans even went on to point out a second visible in that same scene. A tiny glimpse of another plastic water bottle can be scene behind Ser Davos' foot during the council scene:

This water bottle error comes just two weeks after Game of Thrones came under fire from fans who had spotted a coffee cup in the banquet hall in Winterfell's castle. That coffee cup, seen only briefly sitting in front of Daenerys Targaryen during the celebration feast after the battle with the Night King, quickly erupted into a pop culture talking point for weeks. Sophie Turner was even asked to address it during an appearance on The Tonight Show with Jimmy Fallon, in which she claimed that Emilia Clarke probably just forgot to get rid of the cup during one take.

HBO later issued a statement on the coffee cup mishap, and had the cup digitally removed from the episode on all of its services. It has yet to be seen if the network will do the same for this water bottle.

Since then, fans have been on the lookout for any more possible errors in the show's final episodes. There was a bit of a questionable moment after the penultimate episode where some fans claimed the show included a scene where both of Jaime Lannister's real hands were visible, but the photo was actually a behind-the-scenes shot before CGI was added that never actually aired in the episode. This water bottle will now be the one, last error that Game of Thrones fans spotted in the series.