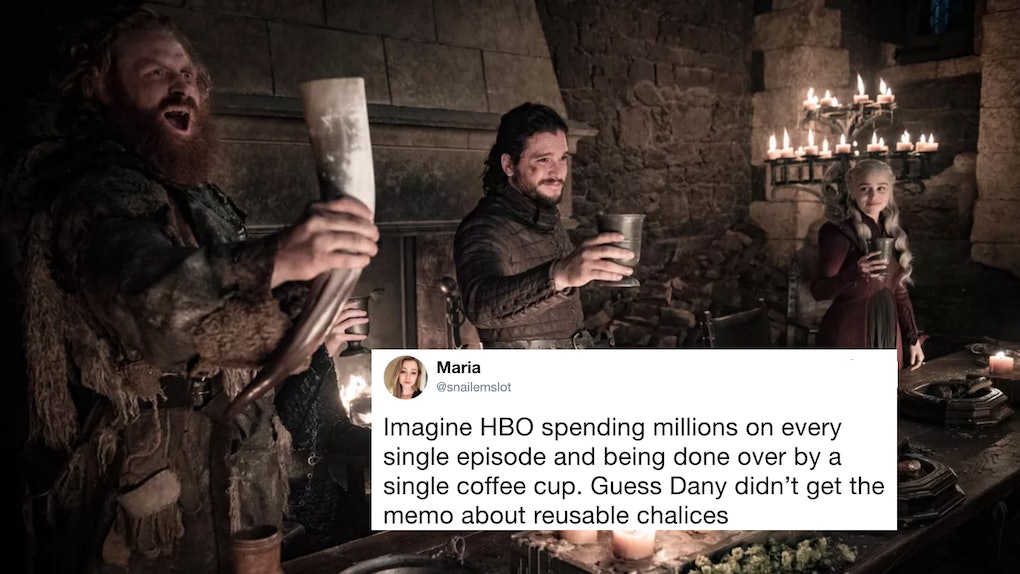 Wine was not the only refreshment on the menu during Winterfell's big celebratory banquet on Sunday night's latest episode of Game of Thrones. Fans were shocked to notice that Daenerys Targeryen seemed to bring her own cup of coffee to the feast. A quick shot of a to-go disposable coffee cup similar to those from Starbucks appeared for only a couple seconds, but the fans have been going wild about the prop error ever since the episode aired. These tweets and memes about the Starbucks cup in Game of Thrones show just how much fans have been ragging on the fantasy series for its glaring mistake.

Spoiler alert: This post contains light spoilers from Game of Thrones Season 8 Episode 4, "The Last of the Starks." Most viewers probably missed the coffee cup at first, but a few eagle-eyed fans shared videos and screenshots of the anachronism shortly after the episode aired and it all blew up from there. If you want to see the coffee cup for yourself, it shows up on the table in front of Daenerys Targaryen during the celebration in Winterfell's great hall, just before the 17:40 mark in Episode 4.

The brief mistake came as a huge shock to fans given the massive budget on the series and the lengthy two years of production that went into perfecting these final six episodes of Game of Thrones. The coffee cup became such a major conversation topic that it was even among the top trends on Twitter on Monday morning, as fans shared tons of jokes about how Daenerys might have picked up a Starbucks order in Winterfell. Check out all of the best tweets and memes about the Game of Thrones coffee cup below:

Since the Starbucks cup has evolved into a huge joke online, Game of Thrones' art director Hauke Richter has even weighed in on the anachronistic error. Richter told Variety that he thinks the coffee cup fiasco is being blown out of proportion, and that he believes it has only become such a big joke because it is the first time anything like this has slipped through the cracks on Game of Thrones.

This actually is not the first time that Game of Thrones fans thought they saw an out-of-place coffee cup in the show. All the way back in Season 4, a zoomed-in image went viral in which Jaime Lannister appeared to be holding a coffee cup while in the background of a royal wedding. However, outlets later confirmed that the coffee cup shot was actually taken from a behind-the-scenes production video that HBO aired after the actual episode, so it did not actually appear within the series proper. Of course, Daenerys' coffee cup in this latest episode is a different story, though, since the cup can clearly be seen about 17 and a half minutes into the actual episode.

There are only two episodes of Game of Thrones left, so this is probably the last big error we will be seeing in the show. The penultimate episode of the series will air on HBO on Sunday, May 12 at 9 p.m. ET.