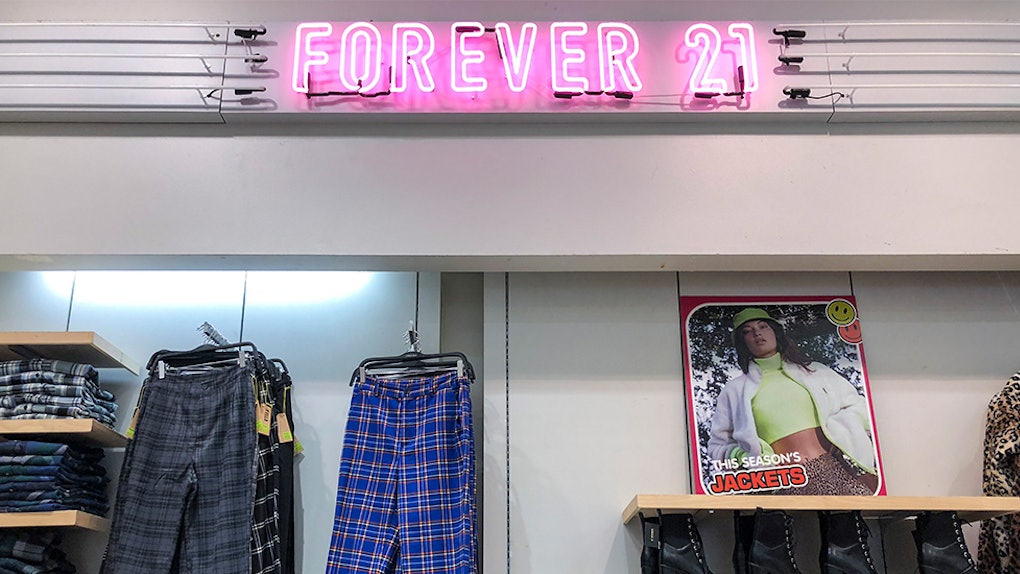 Forever 21 Officially Filed For Bankruptcy & Over 300 Stores Are Closing

Ugh, you guys, today is the saddest of days. After weeks of rumors and guesses, the retailer itself has confirmed that Forever 21 officially filed for bankruptcy, and with that, hundreds of stores will be closing. Cue the violins, I'm about to cry! I guess some things just aren't meant to last ~forever~, and if that pun hits too hard, I deeply apologize. I know it's too soon.

For real, though, rumors of bankruptcy have been surrounding the fast fashion giant for over a month now, and it seems like shoppers are finally getting some real-deal answers. In an official press release, the company officially announced that they've filed for Chapter 11 bankruptcy protection, and while you might assume that implies the end of Forever 21 as you know it, the company hopes this will help them, not hurt them. "This was an important and necessary step to secure the future of our Company, which will enable us to reorganize our business and reposition Forever 21," said Linda Chang, Executive Vice President of Forever 21, Inc., in the press release.

Still, in 2019, the way people shop is more thoughtful than ever before. Buyers prefer to spend a little more on eco-friendly garments that last, as opposed to dropping a quick $20 on a cute going-out top that will, inevitably, fall apart, then repeating the cycle every monthly trip to the mall. Plus,the rise of online shopping has made brick and mortar stores almost a secondary option, so it's somewhat unsurprising to hear that Forever 21 will be shutting down 178 stores in the U.S., and closing almost 350 stores in total, per The New York Times.

Teen me loved a trip to my local Forever, but I admit that if I do shop there new, it's almost always via their website:

So drama aside, is this the end of Forever 21? Probs not, thank goodness. "The Company enjoys and benefits from decades-long relationships with its vendors, and dozens have already agreed to support Forever 21’s restructuring efforts," the press release reads. Cue a big sigh of relief! In fact, Chang seems to think the restructuring will make the retailer even more successful in due time. "With support from our key landlord and vendor constituents, we are confident we will emerge as a stronger, more competitive enterprise that is better positioned to prosper for years to come," said Change in the release, adding that their top priority is to "remain committed to delivering the fast fashion trends that our customers have come to expect from Forever 21."

Hear that? Forever 21 lives on! Let's call it "Forever (Minus a few months of restructuring) 21" from now on, shall we?

Forever 21 was such a massive part of my childhood, and even as fast fashion grows more and more taboo, I have to admit that the store played a key role in helping me explore and develop my own personal sense of style when I was young. Fingers crossed the brand can re-emerge from this restructuring bigger and better (And, in a perfect world, a bit more sustainable!) than ever before.