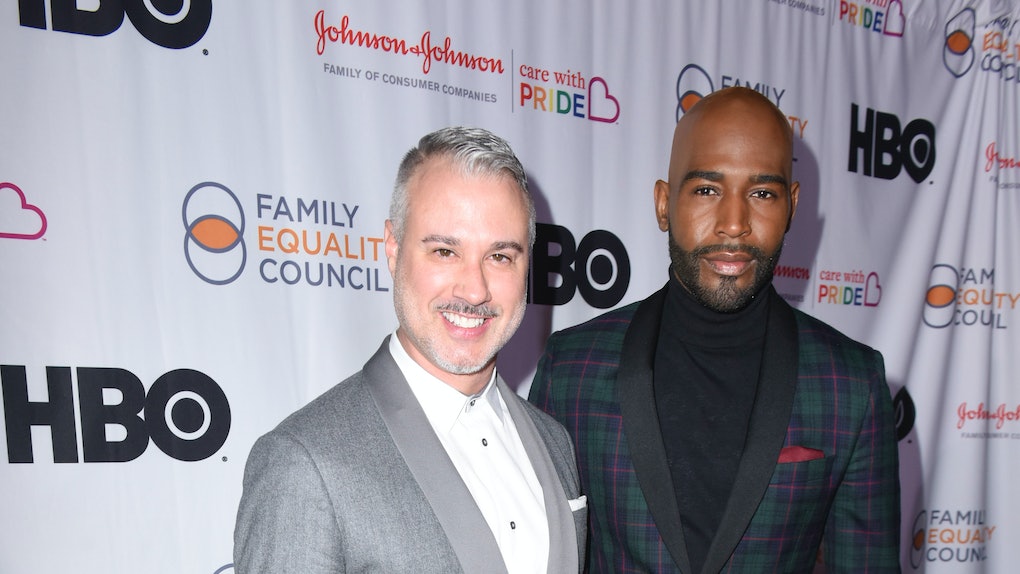 Everything Karamo Brown Has Said About Ian Jordan, His Fiance, Is Seriously So Sweet

If you haven't seen Queer Eye, the best show to hit Netflix since Stranger Things, then you need to stop what you're doing, tell your boss you're sick, and go binge-watch it immediately. OK, caught up? Good. Because one of the stars of the show is engaged, and everything Karamo Brown has said about Ian Jordan, his fiancé, will make you realize that love is real, and also, OMG, their romance is the stuff of legends.

Fans of Queer Eye will know Brown as the show's "culture" expert. You know, the one who comes in and has super deep conversations with the contestants about what's really going on in their lives. For instance, in one episode of season two, Brown took Skyler, a trans man who had recently undergone top surgery, to officially change the gender marker on his driver's license. It was a huge deal, and Brown was totally there for him, just like he's been there for all the contestants who've overcome the things that were holding them back from living their best lives.

When Brown proposed to his boyfriend of eight years, Ian Jordan, on May 9, everyone was seriously thrilled for them. Brown does so much good for so many people, that it's nice to see him happy with the person he loves. He deserves it! If you're not already crying, here's everything Brown has said about Jordan. Grab a tissue.

How he knew Jordan was the one makes so much sense.

While Brown might focus more on the contestants of Queer Eye than opening up about his personal life on the show, that doesn't mean that he hasn't been honest about his relationship. In fact, Brown told Elite Daily how he knew Jordan was the one, and it's probably the most Karamo thing he's ever said.

"[I knew he was The One] because he communicated really well," Brown told Elite Daily. And then, of course, Brown also gave some great relationship advice on top of his sweet comments. "Communication is key and the foundation for everything. If you can talk about the big, happy moments, the sad moments, your fears, the things that inspire you in a way that makes you transparent... I've never had an interaction like that with anyone before. So I just knew."

He just knew, y'all.

His proposal to Jordan was expectedly heartwarming, too.

The way Brown proposed to Jordan was obviously perfect. Surprising his man on his birthday, Brown got down on one knee in front of family and friends, and asked Jordan to be his husband. According to Entertainment Tonight, Brown's proposal was seriously sweet.

"You are the funniest man I know, the kindest man, my biggest cheerleader," he said. "You made me feel like I could do anything." Additionally, according to fellow Queer Eye star Tan France's Instagram story from the night of the proposal, Brown also said, "All these things I accomplished, only because I get home, I know that I have you. You make me feel like I can do anything, and I just want to let you know that I hope that we can conquer the world together."

Brown isn't afraid to let everyone know how in love he is, either.

Before Brown posted about his engagement, he posted a really cute photo of himself and Jordan for Jordan's birthday, with the caption, "I love you because of your heart, your humor but mostly because you don’t mind serving #GlamourShots realness w/ me anytime I ask," Brown wrote under the photo. "I pray today and this year brings you everything your heart desires."

Yep. Per his signature style, Brown kept it short, sweet, and poignant.

He also totally admires Jordan's willingness to step in as a stepfather.

Brown has two sons, which may come as a shock to even the most devout Queer Eye fans. But, when he was a 15-year-old high school student, Brown's then-girlfriend became pregnant, something he didn't even know about until 10 years later. But when he found out he had a son, his life completely changed and he soon received full custody of Jason in 2007. He also adopted Jason's half-brother Chris in 2010.

Obviously, being a single father is difficult, but Brown has praised Jordan's parenting skills. According to Entertainment Tonight, Brown said, "The moment that he stepped in to be a stepfather to my kids, you just can't ask for someone better than that." Obviously, parenting is hard, but the fact that Brown and Jordan have already worked together as parents is just further proof that they're meant to be. "I just feel so much love. I mean, this exciting time of our life for the show being a success, having my kids here, my son's mother, family, the love of my life. This is it."

You heard it straight from the source: This is it.