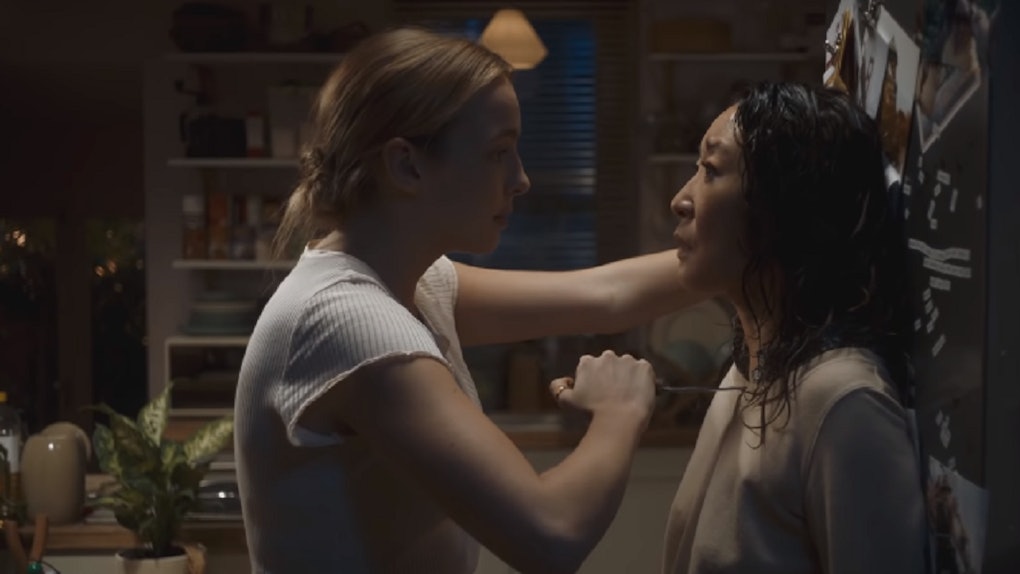 If a dramatic first season of a thriller ends with one woman stabbing another, you would think these characters will go out of their way to avoid each other in the following season. Such isn't the case with Killing Eve, following the growing mutual obsession between a MI6 officer and a psychopathic assassin. The first season ended with Sandra Oh's Eve stabbing Villanelle the assassin, but the latter escaped as Eve panicked about what she had done. That scene already had us suspecting this, but Eve and Villanelle's relationship in Killing Eve Season 2 is becoming even more intense.

Before the series met critical acclaim during awards season, the finale of Killing Eve featured Eve finally tracking down Villanelle (Jodie Comer) rather than the other way around. Meeting her in her Paris apartment, Eve stabbed Villanelle, but despite Villanelle's instructions to leave the knife inside her, Eve panicked and withdrew it. As Eve rushed away to find something to tend to Villanelle's wound, Villanelle managed to hoist herself up, shoot at Eve with a gun, and escape the apartment.

The Season 2 trailer confirmed that Villanelle survives her stabbing, but she's now on the loose as Eve grapples with her complex feelings about the killer and what she's done to her. The trailer hints that the women teasingly maintain contact throughout the season before potentially meeting each other again. Before the season starts and we get a sense of the story's pacing, Killing Eve producer Elinor Day opened up about how Eve and Villanelle's relationship changes in new episodes.

"I suppose the big difference is that while series one was very much a cat-and-mouse chase, in series two we’re really exploring different facets of the relationship between Eve and Villanelle," Day told Entertainment Weekly.

Day spilled about how the show's research led to the knowledge that psychopaths and narcissists tend to see others' actions toward them as "evidence that the person who did it to them is obsessed with them." Explaining how this plays into Villanelle and Eve's contact, she told the magazine:

Villanelle sees the stabbing as a really good thing — an affirmation of Eve’s obsession or indeed love for her. And because these two women are very much circling each other for the first half of the series, you have a kind of push-me, pull-you of how they’re coming back toward each other — what signals they are giving each other and how the other one is playing with those signals, that they’re not immediately answering them, and that it kind of drives them both mad.

The tantalizing scenes between Villanelle and Eve is part of what captured fans' attention during Season 1 of Killing Eve, so peeling back another layer of their bond ought to be just as intriguing. Day also teased that the second season will focus on a new case about a family and that early episodes will detail the murder of a man who developed and owned a powerful data tech company.

Although these other storylines are seemingly unconnected to Villanelle, I'm ready to see her interactions with Eve become even more twisted in Season 2. We may have to wait a few episodes before the two face off in person again, but I'm here for their cat-and-mouse game bumping up a notch.

More like this
This 'Mare Of Easttown' Promo For Season 1, Episode 5 & Beyond Is So Intense
By Ani Bundel
These Tweets About Damon In 'Pose's Season 3 Premiere Show Fans Are NOT OK
By Dylan Kickham
When Will 'Riverdale' Season 5 Return In 2021? Its Mid-Season Break Is Long AF
By Rachel Varina
Stay up to date