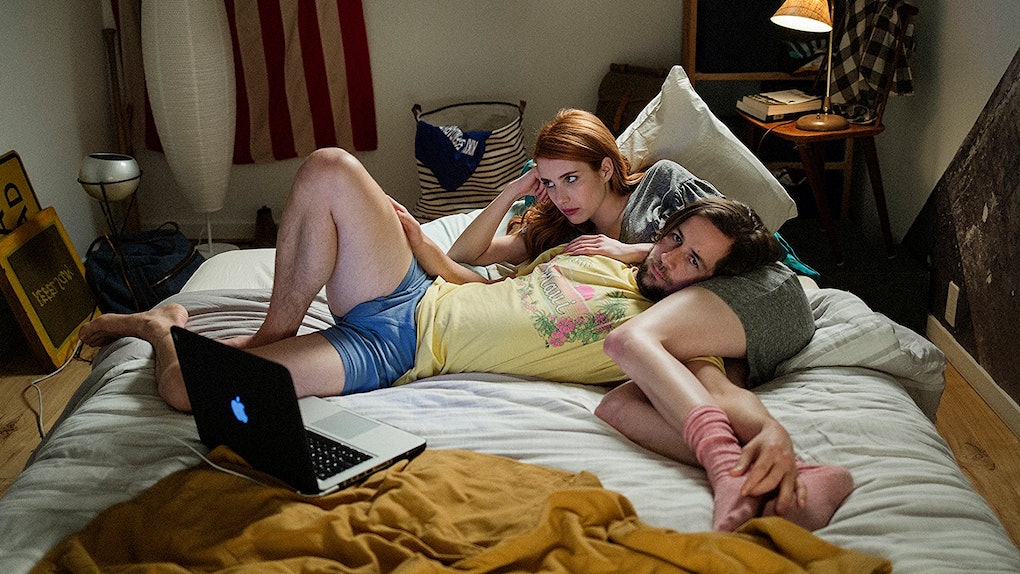 Where did all the good romantic comedies go? It seems like there are a zillion comic book movies and action flicks in theaters these days, but no low-key romantic comedies for those of us just looking for a sweet love story. After what seems like years of waiting for the rom-com renaissance, there's finally a new movie on the block that will make you cry in all the best ways, and it stars one of my favorite celebs: Emma Roberts. If you're desperate to see young people fall in and out of love, Emma Roberts' In A Relationship is the funny, relatable rom-com you've been waiting for.

Roberts stars in the indie comedy as Hallie, a 20-something Los Angeles resident who's desperate to move in with her long-term boyfriend Owen (Michael Angarano). Hallie and Owen spend pretty much every day — and night — with each other, but when it comes to actually moving in together, Owen resists (sound familiar?). Ultimately, Hallie presses Owen on the topic one too many times, and they decide to take a break so that he can figure out what he wants. In A Relationship could easily be a typical break-up story — they go their separate ways and mope around until they realize that they're meant to be together — but it resists taking the conventional route. Instead, both characters get to live out a few fantasies and test the waters of single living, and the end result is so surprising, yet sweet, that it will make you rethink every relationship you've ever had.

Intercut with Owen and Hallie's breakup arc is the story of Matt (Patrick Gibson) and Willa (Dree Hemingway), two people who are hooking up for the first time. Matt, Owen's best friend, is your classic nerdy-but-sweet guy who falls head over heels for Willa, Hallie's adventurous cousin. At first, they seem totally outmatched in every sense — experience, interests, and relationship goals — but Gibson and Hemingway have such great chemistry that their on-screen romance somehow makes so much sense. If Owen and Hallie are meant show what can go wrong when you get complacent in a relationship, Willa and Matt show how fun (and also how confusing) things can be before you get to that point. By showing this "before and after" view, director/writer Sam Boyd has created a movie that practically everyone, no matter where you are in life, will be able to relate to — and he's somehow made it funny along the way.

Roberts is so amazing at capturing the clingy-yet-normal Hallie that I'm shocked she's not a bonafide movie star now. As Hallie attempts to figure her sh*t out, she does things that we've all done before: She flirts with random guys and girls, drinks too much, and loafs around in pajamas. Even as Hallie's story line gets increasingly complicated, Roberts totally nails the feeling you get when you're just going with the flow because you don't really have another option. Is that a real feeling? I'm not sure, but it seems like it should definitely be one.

In A Relationship is actually based on Boyd's 2015 short film of the same name, starring Dakota Johnson (I know right? I know). Johnson stars as Willa and reunites with her How To Be Single co-star Nicholas Braun, who plays Matt. The short film features documentary-style interviews with the four lovers (Zachary Webber and Sophie Simpson play the other couple) that get at the heart of just how different these two experiences can be. The short film is great, but personally, I prefer the movie, because I don't feel like we need the sit-down interviews to understand each character. When Matt goes up to the bar and asks for "the lightest beer they have," I think that speaks volumes. And also it's hilarious because it's just so exactly what someone like that would do.

Unfortunately, there's no set release date for In A Relationship, so you'll have to satisfy your relatable rom-com needs with the short film. Or, you know, you could watch Love Actually for the 37th time.