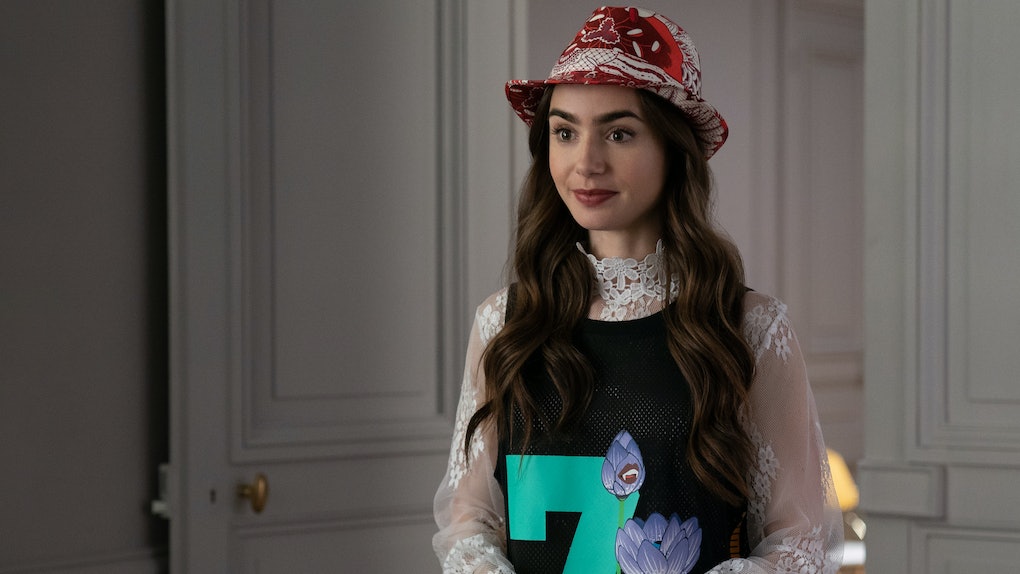 Emily Cooper's Parisian adventure isn't over yet. After becoming one of the buzziest new shows of the last year, Emily in Paris was officially renewed for a second season by Netflix in November 2020. So, when can fans expect to fly back to Paris and catch up with Emily? Here's everything to know about Emily in Paris Season 2, from news on its premiere date to where the story is headed.

The debut season of Emily in Paris became a lightning rod for social media fandom and critical controversy immediately after it premiered on Netflix in October 2020. Critics and fans alike called out Emily's ridiculous antics as she galavanted around Paris without any knowledge of the city's culture or language, but Lily Collins' bright, charming performance proved to be perfect for an easygoing, ambient TV marathon.

At the end of the first season, Emily finally seemed to secure her spot at Savoir through her inventive marketing campaigns, but her love life was another question. She finally got to hook up with her previously unavailable chef neighbor Gabriel ahead of his departure from Paris, only to discover he would not actually be leaving because Mathieu (another of Emily's suitors) provided Gabriel the funds for him to continue cooking in Paris. Fans can bet Season 2 will pick up with Emily having to make a big choice about her romantic future.

Netflix has not yet announced a premiere date for Season 2, but if the show follows a traditional release schedule, fans can expect the new season at the end of 2021.

But notably, in a recent letter to shareholders listing high-profile releases slated for the back half of 2021, Emily In Paris did not make the cut. That could be a sign the show may not return until 2022.

The Emily in Paris cast announced the Season 2 pickup with a short video in which each character said, "Deux." As of yet, Netflix has not released an official trailer for the second season of Emily in Paris. However, the season is officially filming.

Fans can expect the same main cast from Season 1 to return in Season 2 of Emily in Paris. So far, the series has not revealed whether any new cast members or characters are being added in the follow-up season.

To capture the authentic French experience, Emily in Paris Season 1 was filmed on location in Paris in 2019. Season 2 will do the same. According to Netflix's announcement video, filming began in May 2021, in Paris and St. Tropez, as well as three other areas in France.

Although plot details for Emily In Paris' second season are still scarce, fans can be assured of one thing: Emily will be less annoying when she returns. At least, according to series creator Darren Star, she will be. Speaking to Variety about the new season, Star acknowledged the semi-backlash the character faced on social media for her "basic" behavior, and most importantly, for her inability to follow the new norms of her adopted country.

"The first season didn't cover that much chronological time," Star explained, as to why the show gave her such a pass, especially for her inability to pick up French language basics. But with time between the two seasons, "Emily will embrace the city a little bit more."

But don't worry, she'll still struggle with her French. "When she got there, she got a bit of a free pass in the beginning, and I don't think it will be quite as easy for her in second season. I think she will be more assimilated in terms of living in Paris and stepping up to the challenges of learning the language," Star said.

As for what will happen now that Emily's leaning into French culture, Star teased the "cliffhanger" love triangle of Season 1's finale will have repercussions: "I think there's a lot of fallout that happens from the that in the new season."

Fans will be anxiously hanging onto every missive Emily sends back from France. Emily In Paris Season 2 does not yet have a release date.

This article was originally published on November 18, 2020