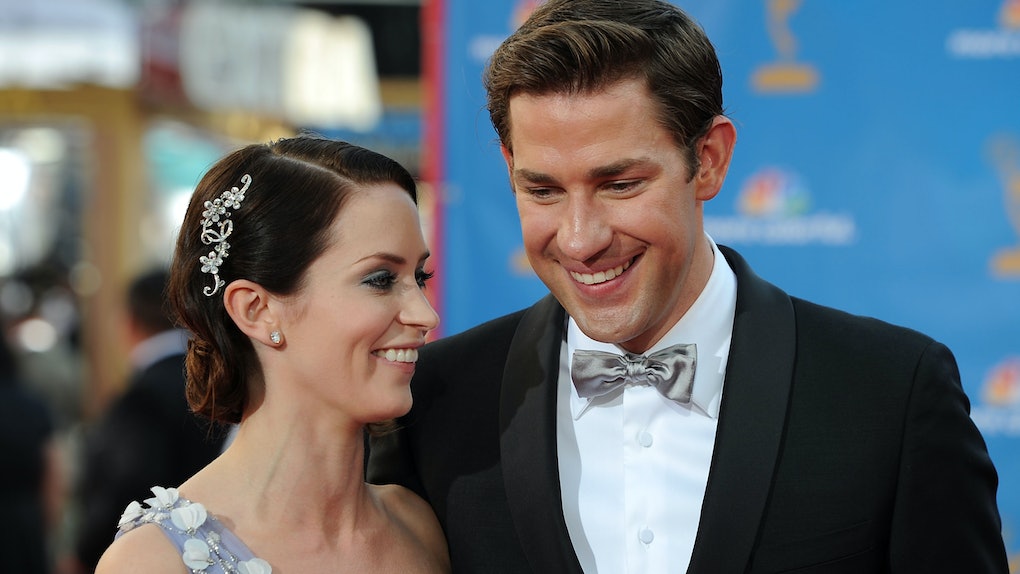 Emily Blunt and John Krasinski are so unbelievably cute, it should be illegal. No matter where they are or what they're doing, seeing them together just makes sense on a cosmic level, and let's be real — it's sweet AF. In case you have doubts, Emily Blunt and John Krasinski's relationship timeline basically serves as irrefutable proof that they're definitely the real deal.

It turns out, long before the duo first met in real life, Krasinski already had a major (and I mean major) crush on Blunt. In fact, he was so into her that he told Glamour he had watched The Devil Wears Prada a whopping 75 times. In a recent joint interview with The Hollywood Reporter, the couple talked about how they met in 2008 through a mutual friend at a restaurant, while Krasinski was having dinner with Justin Theroux. According to Krasinski, it was definitely love at first sight.

"It was one of those things where I wasn’t really looking for a relationship and I was thinking I’m going to take my time in L.A.," Krasinski told Ellen DeGeneres. “Then I met her and I was so nervous. I was like, ‘Oh god, I think I’m going to fall in love with her.’ As I shook her hand I went, ‘I like you!'" They told The Hollywood Reporter that their first date involved pizza and his West Hollywood apartment. Neither offered any more details, but based on their lack of detail and Blunt's very casual, "It's so precious, I don't want to talk about it. Is that alright?" you can probably guess what happened next.

Well, the love between these two continued to blossom, because less than a year later — in August 2009 — they decided to get engaged. And yet again, their deep love for one another was so clear that it even led to some serious waterworks during Krasinski's proposal.

"She did cry after I cried and we cried and then everyone around us was crying," Krasinski told Access Hollywood. "Then, I think people weren't really sure what was going on, but they were crying because we were crying. But it was great."

Fast-forward one year to June 2010, and Krasinski and Blunt tied the knot at George Clooney's decadent estate on Lake Como in Italy. Nearly two years after their nuptials, Blunt couldn't help but gush about how much she was enjoying married life.

"This is what I find difficult about talking about my marriage: It’s hard to sum up something that’s so vital and means everything to you in a sound bite. Do you know what I mean?" she told Manhattan magazine. "All I can say is that it’s an effing blast. It’s just great, and I’m so happy.”

In September 2013, Us Weekly reported that Blunt and Krasinski were expecting their first child. Baby Hazel was born the following February, and Krasinski took to Twitter to spread the wonderful news.

Also, let's not forget their adorable on-stage PDA after Blunt won Best Action Movie Actress for The Edge of Tomorrow at the 20th Annual Critics Choice Awards in 2015. Krasinski is such a ham!

In July 2016, the couple welcomed their second baby, another daughter named Violet.

Just when we thought their synergy couldn't get any better, in March 2017, they decided to prove us all wrong by announcing they would be starring in their first movie together, A Quiet Place. Not only did the couple get to act alongside each other, but it was also written and directed by Krasinski. In fact, he told The Hollywood Reporter that he'd written Blunt's role for her specifically, but didn't want to ask her to play it out of fear that she'd accept because she felt like she had to. After reading the finished script, Blunt said she "went sort of gray. I couldn't imagine the thought of letting someone else play the part." Krasinski said that when Blunt asked him if she could take on the role, "It was like she was proposing to me. It was one of the greatest moments of in my career."

In a February 2018 interview with Vanity Fair, Krasinski talked about how impactful it was to watch Blunt act on A Quiet Place in real life. "The air changes in the room when she starts doing what she does. It’s so honest and so pure and so powerful," he told the magazine. "It’s like a superpower that she can just unlock and do so specifically with not many attempts. For me, I love acting, and I’m so lucky to be doing it. But she’s on another plane. This weird intersection happened while filming where I totally forgot I was her husband. I was just watching her performance and was lucky enough to be in the front row." Can you even?

2018 saw the release of A Quiet Place, which, according to THR, garnered $341 million at the worldwide box office. And as for Blunt? You can catch her killing it as Mary Poppins in Mary Poppins Returns right now. This is one power couple you don't want to mess with. It truly seems like these two have found an amazing match in one another. Although all relationships have their trial and tribulations, these lovebirds have been riding some serious highs, and it seems like it's only uphill from here.