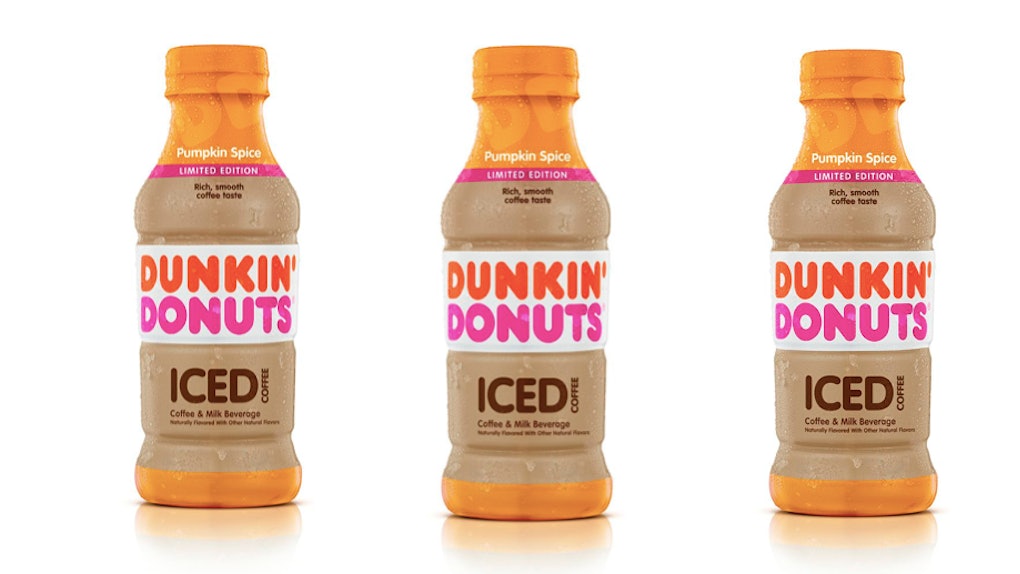 OK, I'm not necessarily saying that I crave pumpkin spice every second of every day, because that would be a total over-exaggeration. However, I will say that I'd be one of the happiest people alive if I could obtain pumpkin spice on-demand, at every second of everyday. And as someone who's constantly on the go, taking time out of my day to stop for coffee can be pretty inconvenient. So, I was pretty elated when I heard that Dunkin' Donuts' bottled Pumpkin Spice Iced Coffee is coming soon. You'd better believe I'll be stocked with several bottles on a pretty regular basis.

If you want some consistent fall fuel, DD has created something totally revolutionary: bottled Pumpkin Spice Iced Coffee. According to an Aug. 30 press release, it's the latest and greatest addition to the coffee giant's ready-to-drink (RTD) iced coffee line, and it's hitting grocery and convenience store shelves for a super limited time as of Sept. 10, which is only a few weeks away. Similar to Dunkin' Donuts' in-store coffee, the bottled version blends quality Arabica coffee with creamy milk, as well as real sugar. It's all I want to drink this season, TBH. So, get excited, and prepare to go into a caffeinated, pumpkin spice-induced coma. Things are about to get festive AF up in here, my pumpkin spice-lovin' fam.

Since DD's bottled Pumpkin Spice Iced Coffee won't debut for yet another few weeks (bummer, I know), you should probably know that the brand’s entire fall menu is already available in restaurants throughout the United States, according to a press release. The in-store menu features pumpkin spice-flavored foods and beverages, and they'll definitely tide you over until the RTD coffee becomes available. Between pumpkin spice iced and hot coffee, iced and hot lattes, cappuccinos, macchiatos, and Americanos, frozen coffee, cold brew coffee, muffins, donuts, and munchkins, you definitely won't feel at a loss for pumpkin spice. If you're looking to enjoy pumpkin spice from the comfort of your own home, DD also sells pumpkin K-Cups and bagged coffee at grocery stores. It's a gourd-lovin' miracle.

I'll be the first to admit that I'm a pumpkin spice addict through and through, so DD's RTD Pumpkin Spice Iced Coffee is exactly what I need when I'm on the go, lazily sitting at home on the couch, or if I'm at work, in need of a quick pick-me-up. Until then, I'll be stocking up on DD's in-store pumpkin spice menu items, though, because two weeks without all the pumpkin spice snacks are simply unthinkable. Let the spooky games begin.