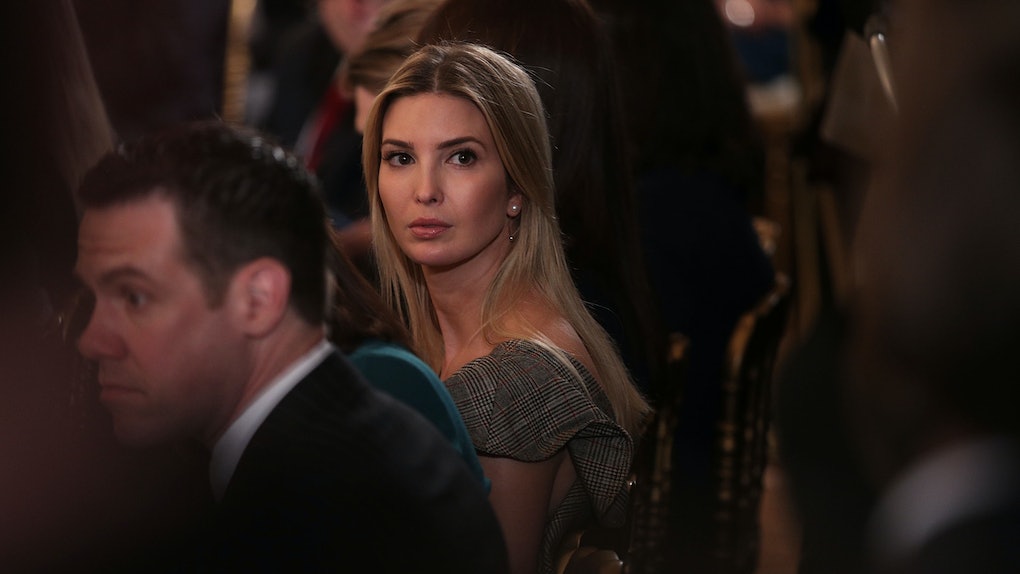 President Donald Trump has thus far avoided criticizing Republican U.S. Senate candidate Roy Moore, the former Alabama Supreme Court judge who has recently been accused by multiple women of sexual misconduct with them when they were teenagers (Moore has denied these charges). The same can't be said for Ivanka Trump, however, after the first daughter and White House advisor forcefully critiqued Moore's response to the allegations. Now that critique is being wielded by the Democratic candidate in the upcoming Senate race, Doug Jones, whose new campaign ad uses Ivanka Trump's words against Roy Moore.

Those words first made headline news last week, when Ivanka Trump talked to the Associated Press about Moore on Wednesday, Nov. 15. "There's a special place in hell for people who prey on children," the younger Trump told the AP. "I've yet to see a valid explanation and I have no reason to doubt the victims' accounts."

That exact same quote is now featured at both the beginning and end of Jones' new ad, which also features quotes from two other notable Republicans. The first of the two is Attorney General Jeff Sessions. During a hearing before the House Judiciary Committee last week, Sessions said, "I have no reason to doubt these women," when asked about allegation made against Roy Moore.

The other Republican whose words were featured in the ad was Alabama's senior senator in the U.S. Senate, Richard Shelby. Senator Shelby is on the record as saying Moore should consider dropping out of the Senate race, which will be held in December. Shelby also said that he would "absolutely not" vote for Moore.

There have been other notable Republicans who have said Roy Moore should drop out of the Senate race. For example, former Republican nominee for president and current U.S. Senator John McCain said, "the allegations against Roy Moore are deeply disturbing and disqualifying. He should immediately step aside and allow the people of Alabama to elect a candidate they are proud of."

And then there was McCain's successor as the Republican nominee, former Massachusetts Governor Mitt Romney, who also urged Moore to step down. "Innocent until proven guilty is for criminal convictions, not elections," Romney wrote on Twitter. "I believe [alleged victim] Leigh Corfman. Her account is too serious to ignore. Moore is unfit for office and should step aside."

However, Jones' choice of what the ad calls "conservative voices, putting children and women over party, doing what's right" shows signs of a calculated strategy. By choosing to feature the words of Ivanka Trump, Sessions, and Shelby, the ad appealed to Alabamans by using the daughter of a president who is popular in the state, that same president's attorney general (who also happens to be a former U.S. Senator for Alabama himself) and the state's most senior federal representative.

Recent polls show Doug Jones with a modest lead over Moore with just under a month left in the Senate race. The election has significant implications for the balance of power in Washington D.C., as Democratic win would cut the Republican majority down to 51-49 until at least 2019.

Though Trump hasn't spoken on whether Moore should step down nor revoked his endorsement of the Republican candidate, senior advisor Kellyanne Conway seemed to make the position of the White House clear.

"Doug Jones in Alabama, folks, don't be fooled," Conway said during a Monday, Nov. 20, appearance on Fox & Friends. "He will be a vote against tax cuts. He is weak on crime. Weak on borders. He is strong on raising your taxes. He is terrible for property owners."

When asked whether she was endorsing Moore, Conway said, "I'm telling you that we want the votes in the Senate to get this tax bill through."

The date for the Alabama special election, which will permanently replace former Senator Sessions' seat, will be held on December 12.