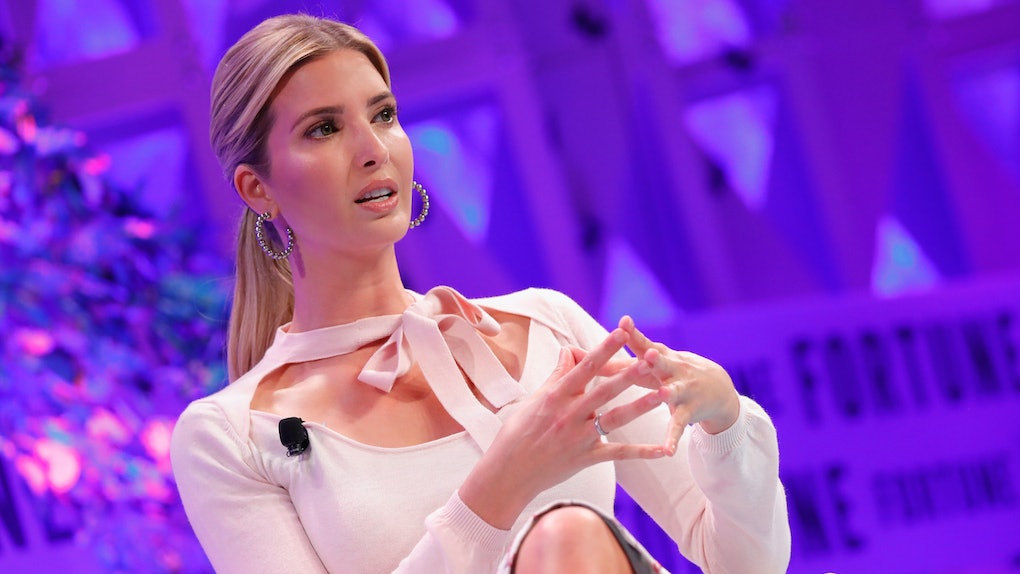 On the surface, it seems like Ivanka Trump has been pretty much on-board with everything Donald Trump has been doing in office. However, the first daughter took a very different stance from her father when asked about allegations of sexual misconduct against Alabama Senate candidate Roy Moore. Ivanka Trump's response to the Roy Moore allegations was fierce, to the point, and completely spot-on.

Five women have so far accused Alabama GOP nominee Roy Moore of sexual misconduct, allegations which Moore has denied. Each of those women were in their teens when the alleged incidents occurred. Moore would have been in his thirties.

During an interview with the Associated Press released on Nov. 15, Trump was asked about the allegations, and she didn't cut corners.

“There’s a special place in hell for people who prey on children," she said. "I’ve yet to see a valid explanation and I have no reason to doubt the victims’ accounts.”

This is a far cry from her father's response to the allegations against Moore.

Like most Americans, the president believes we cannot allow a mere allegation, in this case one from many years ago, to destroy a person’s life. However, the president also believes that if these allegations are true, Judge Moore will do the right thing and step aside.

Ivanka Trump's statement put the women who have stepped forward with their accusations first. She questioned Moore's response to the allegations, and completely condemned the idea of preying on children. In short, it was the normal, correct response to a situation like this.

President Trump's statement, however, was wishy-washy. He put Moore first, and the alleged victims second. He didn't particularly condemn Moore's alleged actions, nor did he say that he would put any pressure on Moore to step down "if these allegations are true." Instead, he passively noted that Moore will simply step aside himself.

Despite the growing number of accusers, the president does not appear ready or willing to denounce Moore. According to PBS, reporters asked Trump on Nov. 15 if he believes Moore should drop out of the Alabama Senate race. Trump walked away without answering the question.

It's worth noting that Trump has repeatedly endorsed Moore on Twitter.

Many of Trump's Republican colleagues have taken a much different, firmer stance regarding the allegations. As more and more details come to light, some members of Senate have even backtracked on their support for Moore.

And it would be kind of crazy if they hadn't.

A Washington Post report published on Nov. 9 alleged that Moore had initiated sexual encounters with four teenagers in the 1970s, with at least one of the women as young as 14 years old. Moore denied the allegations, calling them "completely false and are a desperate political attack" in a statement to the Post. Since then, another woman has come forward. On Nov. 13, the fifth woman to accuse Moore of sexual misconduct stepped forward. Beverly Young Nelson claimed that Moore attacked her in a car when she was 16. She alleged that he grabbed her breasts, and attempted to force her face towards his crotch.

Moore, meanwhile, has been throwing blame around. When Senate Majority Leader Mitch McConnell told reporters on Nov. 13 that the Senate candidate “should step aside" from his campaign, Moore went on the attack.

Unfortunately for Moore, there's a whole slew of other Republican senators who are unequivocally denouncing him.

I have now read Mr. Moore's statement and listened to his radio interview in which he denies the charges. I did not find his denials to be convincing and believe that he should withdraw from the Senate race in Alabama.

I believe the individuals speaking out against Roy Moore spoke with courage and truth, proving he is unfit to serve in the United States Senate and he should not run for office. If he refuses to withdraw and wins, the Senate should vote to expel him, because he does not meet the ethical and moral requirements of the United States Senate.

Ah, so that's how you gracefully and ethically handle an awful situation like this. Donald, you might want to take notes.