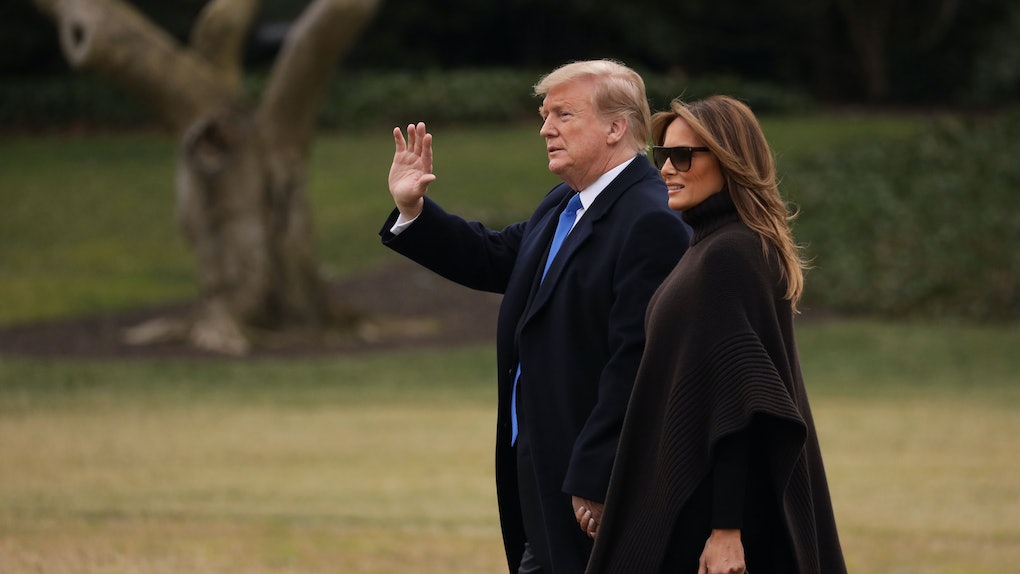 Donald Trump's Tweet About The Fake Melania Meme Is Wild

It's no secret that the internet can come up with some wild material. However, there's one particular meme that stands out above the rest, and it's recently resurfaced. Since October 2017, Twitter has been speculating that the United States' first lady might be using body doubles while appearing in public with her husband. This conspiracy theory is... out there to say the least, and Donald Trump's tweet about the Fake Melania meme totally shuts it down, in an appropriately weird way.

On March 8, President Donald Trump and first lady Melania Trump visited Beauregard, Alabama to observe the damage caused by tornadoes that tore through the southeastern region on March 3. The disaster killed 23 people, and to honor those lives lost the Trump family visited a memorial for the victims. Well, unfortunately, the purpose of the trip was slightly overshadowed once photos surfaced of the Trumps attending the memorial, and Twitter pointed out that Melania looks... different than usual. Thus, the theory of #FakeMelania returned.

Well, clearly Trump isn't having any of it. On March 13, he took to Twitter to push back on the meme, but he might have missed the point. In his tweet, he claimed the media is photoshopping pictures of the first lady and proceeded to call them "deranged." Hm. He wrote,

The Fake News photoshopped pictures of Melania, then propelled conspiracy theories that it’s actually not her by my side in Alabama and other places. They are only getting more deranged with time!

Elite Daily reached out to the White House for comment on the tweet, including which news outlet or outlets the president believes photoshopped photos, but did not immediately hear back.

Trump might, however, have missed the fact that the meme appears to be intended as a joke — an oversight which is kind of surprising, given all the time he spends on Twitter. You have to admit, though, fake news and fake Melania has a nice ring to it.

In case you're not up to date on what exactly #FakeMelania is, here's a quick rundown. On Oct. 13, 2017, Trump spoke to reporters about the United States' dealings with Iran, all while Melania stood next to him. Well, the first thing that struck Twitter as odd was Melania's decision to wear a trench coat and pair of huge sunglasses covering her face. However, Melania's outfit choice wasn't the strangest part of that presser. It was the moment when Trump awkwardly introduced Melania to the reporters that Twitter couldn't get over.

"My wife Melania, who happens to be right here," Trump said to reporters while gesturing to the first lady. It was... awkward.

Following Trump's comment, #FakeMelania was quickly born. Of course, leave it to Twitter to take a possibly horrific scenario and turn it into a slew of hysterical memes. Oh internet, never change.

The #FakeMelania meme went viral for a few days, but eventually died down. However, during their visit to Alabama, Twitter immediately revived the meme, pointed out a few interesting differences in Melania's appearance, such as her wearing sneakers. Truthfully, sometimes it feels like Twitter users investigate better than the FBI.

Conspiracy theory or not, let's just appreciate a great meme when we see one. Trump may not be amused, but given all the time he spends on Twitter, maybe he'll come around.