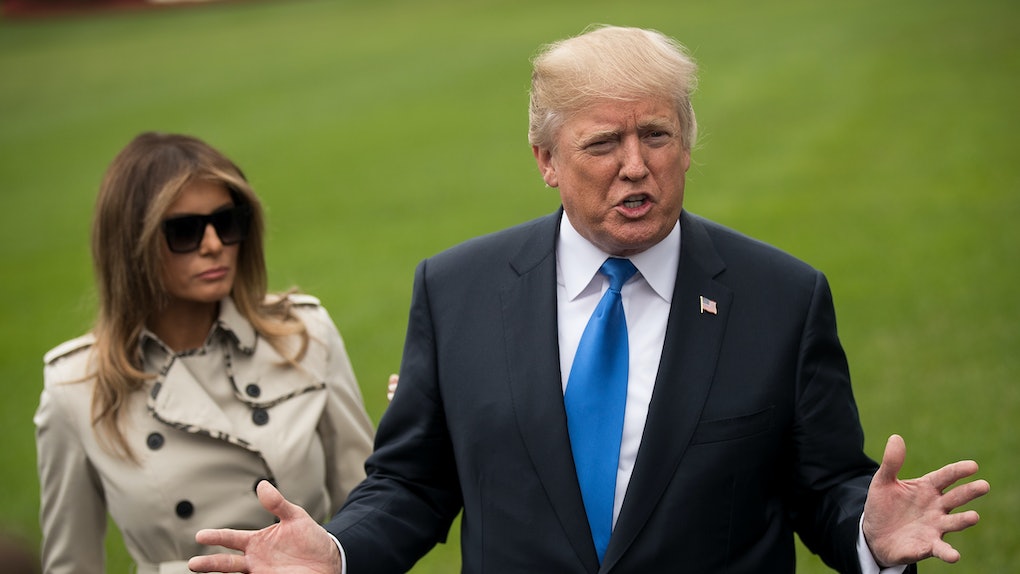 In the past 24 hours, a new conspiracy theory surrounding President Donald Trump and his family has taken seed and flowered beautifully. No, I'm not talking about Ivanka Trump's claim that she used to be a blue-haired punk rawker. I'm talking about the assertion that Melania Trump is using a body double.

Anyways, as people are wont to do in this dystopian nightmare we call life, plenty of people have been confronting our ever-crumbling reality by gleefully meme-ing the sh*t out of Fake Melania.

During a confusing, wide-ranging impromptu presser on Oct. 13, Trump discussed Iran and defended his decisions regarding health care with wife Melania standing by his side in a trench coat and sunglasses.

Trench coat and sunglasses? Seems like the kind of outfit a body double would wear.

There were a few things about the interview that were... off, including the fact that the president said, "My wife Melania, who happens to be right here" while Melania was, in fact, right next to him, nodding along in a suspicious manner. But the alien-esque faux pas that Trump often commits on camera could just be chalked up to a 71-year-old who has a habit of flubbing his words and whoopsy-ing all over decorum.

And yet, a certain @JoeVargas honed in on Melania's stiff countenance and her nose, and, he determined, this is not the real Melania. Granted, it took Vargas (among other conspiracy theorists) a few days to notice, but better late than never if we're going to save Melania. And yes, Vargas is for real.

For real, for real.

Mind blowing, he called it. "Makes me wonder what else is a lie," he pondered.

He even did the detective work for us, looking up "photos of milania trump."

The evidence is incontrovertable.

Just look at those noses. Shadows be damned! And worst of all, the president is in on the scam, trying to convince the media that "she's right here" when it's clearly a poorly matched body double with a bump on the bridge of her nose.

Please ignore the fact that Melania is pictured next to her husband at the same presser, in the same jacket, sans sunglasses. In fact, if anything, this just proves Fake Melania, because... she is... covering for the body double... to make sure that the body double will not be questioned in the future, despite the nose! A-ha!

Now Vargas says he is receiving death threats for "exposing the fake Melania Trump." (I mean, if he's receiving threats, that crosses the line, but for exposing a fake Melania?)

And because humans are both beautiful and ugly, the memes are fresh and freaky.

Some found evidence of Fake Melania in other photos.

I mean, just look at that potato body. The hair's all wrong — and the noses are totally different.

Just look at this. I mean, the evidence is staring us right in the face.

THERE IS AN INTER-DIMENSIONAL CONSPIRACY AT PLAY. I DON'T THINK ANYONE IS SAFE.

Nicole Cliffe, god's gift to Twitter and the world, was all for #FakeMelania.

Oh, #FakeMelania, how do I love thee? Let me count the ways. I love thee to the depth and breadth and height my Twitter can reach, when feeling out of sight for the ends of meme-ing and ideal grace. I love thee to the level of every day's most desperate tweet, by sun and candlelight and the glow of your phone.

And, anyways, how on earth did they think they would fool us?!

Hello, Melania would never step out looking so haggard. That eyewear. That hair.

A lot of people are wise to Trump's game.

And for the naysayers who don't believe in #FakeMelania, this is a very dark timeline, and I really need this right now. So just give Fake Melania believers this one, OK?