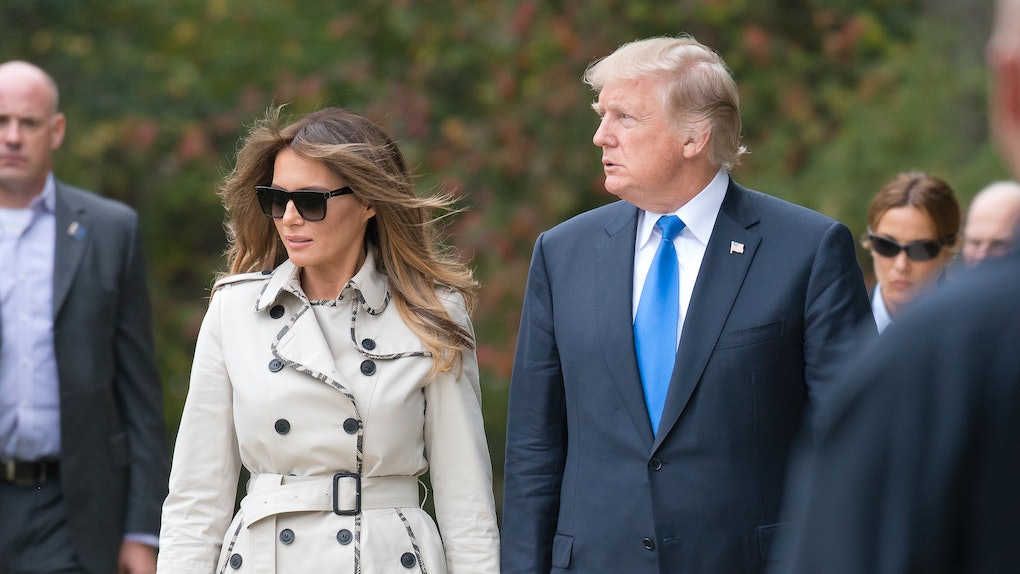 Tweets About A Melania Trump Body Double Are So Wrong... & So Right

The news has been pretty dark and heavy lately, and when that happens, people look to insane conspiracy theories to lighten the mood. Sure enough, on Tuesday, Oct. 17, internet people decided that First Lady Melania Trump uses a body double. Twitter, naturally, has taken this theory and run with it, shouting memes and ridiculous ideas into the maelstrom that surrounds the Trumps.

It all began with a public appearance made by President Donald and ~allegedly~ Melania Trump on Friday, Oct. 13, according to Newsweek. The president made an appearance outdoors to discuss Puerto Rico hurricane relief and the Iran nuclear deal. The MAYBE real Melania stands next to Donald silently. She wears a beige trench coat and large, black sunglasses. Her highlighted hair falls in front of her face, as if she has something to hide! One eagle-eyed Facebook user going by the name "Andrea Wagner Barton" made a public post on Friday night asking,

Will the real Melania please stand up?

Is it me or during his speech today a decoy "stood in" for Melania??

The Facebook user also points to the fact that the president specifically felt the need to mention "my wife Melania, who happens to be right here." PRETTY SUS, SIS.

Wagner Barton's Facebook post has since racked up ver 100,000 shares and 17,000 likes, which is a very hefty social lift. So of course, as anyone could have predicted, in the days since her theory went viral, Twitter went crazy with everyone making their own jokes and twists on a meme about Melania Trump's body double.

Some people acknowledged their own pettiness and need for levity in times like these.

Many Twitter folks dove right on in to conspiracy theory land.

Others took to classic memes (and meme icons) to join in on the fun.

At least one person took it back to a strange instance in which Donald Trump apparently forgot Melania was standing right next to him.

We all had a good old laugh at the conspiracy theory.

Well, at least most of us had a laugh. Others took it too seriously.

It's all fine and well as long as we keep the tweets and memes to fun, light-hearted ridiculousness.

Like I said, we could all use some jokes right now, and making fun of a super out-there conspiracy theory seems like just about the right way to go for that. But can we please, please make sure that it stays that way? Don't let it get out of hand, Twitter. Just keep things fun, for once! Don't ruin it by making it mean!

Last year, conspiracy theories started swirling that Hillary Clinton had been replaced by a body double following a collapse during a ceremony for Sept. 11. Those theories came from the same mean-spirited place where all Clinton conspiracy theories comes from, with conservatives doing everything they could to make voters believe that Clinton was the literal Devil (or, at least, a body double for the literal Devil). As y'all know, we have a very serious problem with fake news (and I mean real fake news, not Donald Trump's version of #fakenews, which is just news he doesn't like), and that conspiracy theory was an outcome of that problem.

Let's not let that happen with this Melania Trump meme! As long as it's just making fun of conspiracy theorists, it's cool. Once it gets into the territory of making fun of Trump and her appearance, it's not cool, it's just mean. And if you're actually out here believing it... man. Don't let the fake news win this time around. Trust in reality. Trust in the power of sunglasses. Trust in Melania Trump being a real human.