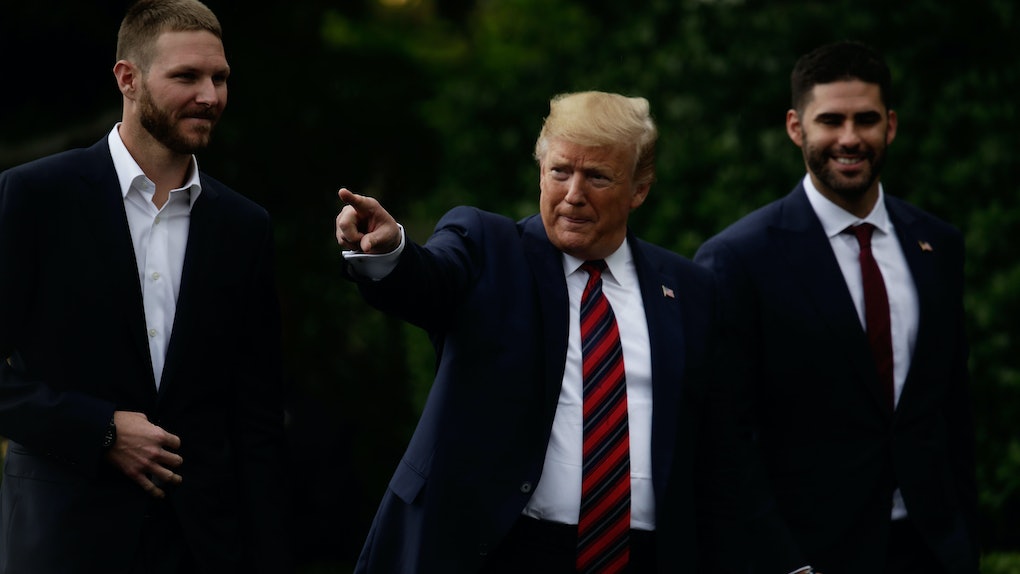 Happy Monday everyone, here's some interesting news to start your day. Over the years, President Donald Trump hasn't necessarily had the best track record with sports teams, especially considering the amount of players who have refused to meet him. However, Donald Trump's tweet about the Boston Red Sox shouted out members who visited him, and made an... uh... interesting claim about their winning streak.

Major League Baseball team the Boston Red Sox visited the White House on Thursday, May 9 to celebrate their 2018 World Series victory. However, only a portion of the team's roster actually showed up for the festivities. That didn't seem to bother President Trump too much though, because on May 13 he took to Twitter to point out the baseball team's winning streak against the Seattle Mariners over the weekend, and ended up crediting... well... himself. He wrote,

Has anyone noticed that all the Boston @RedSox have done is WIN since coming to the White House! Others also have done very well. The White House visit is becoming the opposite of being on the cover of Sports Illustrated! By the way, the Boston players were GREAT guys!

Truth be told, I doubt The Red Sox's record has to do with the White House visit, and is more likely due to hours of practice and tons of hard work, but Trump can think what he likes.

Even though it looked to be a friendly visit between the Sox and Trump, there were still a few familiar faces missing. Nine players chose not to visit the White House on May 9, as well as manager Alex Cora. According to The Boston Herald, Cora, a Puerto Rico native, chose not to visit the White House over the Trump administration's handling of disaster relief in the U.S. territory after 2017 Hurricane Maria.

In the past, sports teams' visits to the White House have been a beloved tradition. However, things have changed since Trump took office. According to Business Insider, 20 major teams in sports ranging from men's football to women's basketball have won championships while Trump has been president, but only ten of those teams have celebrated their victory at the White House. The reasons are varied and include some players' choices not to visit, as well as Trump either not inviting or withdrawing invitations for teams to the White House.

"I didn't invite LeBron James, and I didn't invite Steph Curry. We're not going to invite either team," Trump told reporters on June 8, 2018. Both LeBron James from the Cavaliers and Stephen Curry from the Golden State Warriors had previously stated that they had little interest in visiting the White House due to Trump's controversial politics.

For the teams who do score an invite from the White House, it's been common for some players to skip out. Following the New England Patriots' victory in the 2016 Super Bowl, half of the players did not attend the 2017 ceremony, including quarterback (and Trump's former pal) Tom Brady.

Sports are typically full of spirit and camaraderie, but in this political climate, things might be looking a little different.