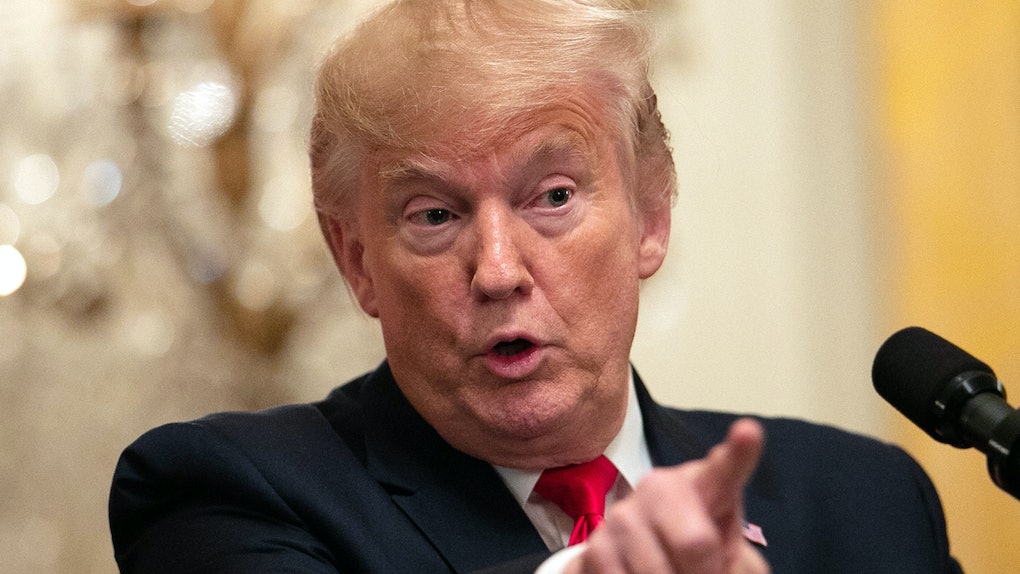 In a Twitter thread on Nov. 18, President Trump addressed House Speaker Nancy Pelosi's Sunday, Nov. 17 interview on CBS's morning television program Face The Nation. During the interview, Pelosi suggested that the president testify as part of the impeachment inquiry. "The president could come right before the committee and talk, speak all the truth that he wants if he wants to... take the oath of office or he could do it in writing," Pelosi said. "He has every opportunity to present his case."

In a response on Twitter, Trump first called Pelosi a "crazy, do nothing speaker of the house," and then referred to the inquiry as a "phony impeachment witch hunt." So, that seemed pretty clear. However, he then finished the thread by saying he will "strongly consider" testifying in order to get Congress "focused again." Come again? Trump wrote,

Our Crazy, Do Nothing (where’s USMCA, infrastructure, lower drug pricing & much more?) Speaker of the House, Nervous Nancy Pelosi, who is petrified by her Radical Left knowing she will soon be gone (they & Fake News Media are her BOSS), suggested on Sunday’s DEFACE THE NATION ... that I testify about the phony Impeachment Witch Hunt. She also said I could do it in writing. Even though I did nothing wrong, and don’t like giving credibility to this No Due Process Hoax, I like the idea & will, in order to get Congress focused again, strongly consider it!

The White House did not immediately respond to Elite Daily's request for comment on whether Trump will actually testify.

On Sept. 24, Pelosi announced that the House would open an official impeachment inquiry into Trump, following a complaint from an anonymous whistleblower regarding a July 25 phone call between Trump and Ukrainian President Volodymyr Zelensky. In the phone call, Trump asked Zelensky for a "favor" which involved investigating political opponent Vice President Joe Biden. A non-verbatim transcript of the call confirmed the presidents had discussed Biden, although Trump denied any wrongdoing. In an emailed statement to Elite Daily, White House Press Secretary Stephanie Grisham referred to the inquiry as Democrats' attempt to "weaponize politics."

This isn't the first time Trump has claimed that he would cooperate in an investigation, but previous promises haven't panned out. In January 2018, Trump told reporters he would be willing to answer questions under oath during former Special Counsel Robert Mueller's investigation into possible collusion between the 2016 Trump presidential campaign and Russia. Trump later backpedaled on the statement, and instead provided written answers to Mueller's questions. The final Mueller report, released publicly in April 2019, did not conclude the president had committed a crime, but expressly noted that it also did not exonerate him.

If history repeats itself, there's a good chance Trump won't be testifying in regards to the impeachment inquiry. But only time will tell.