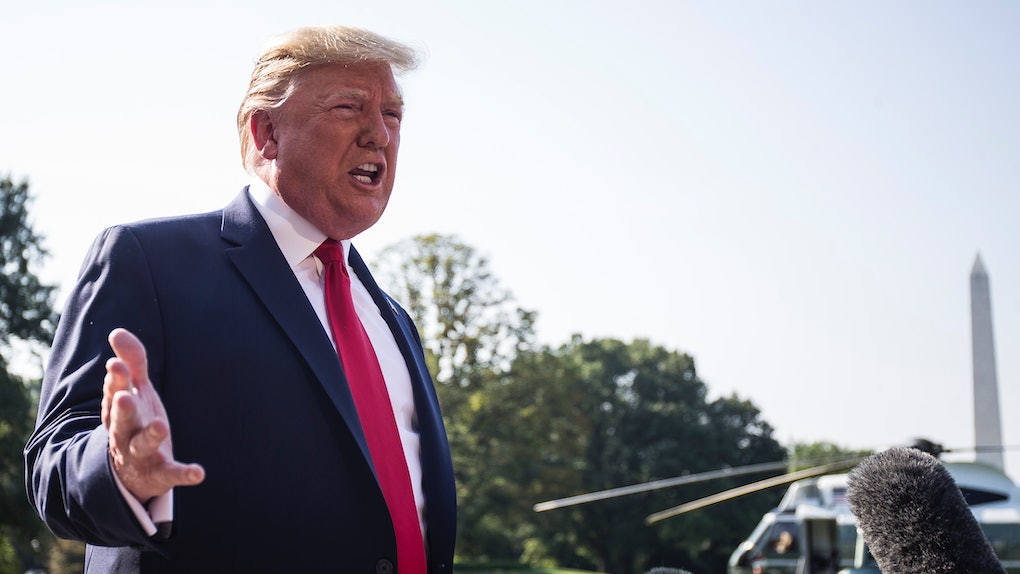 President Donald Trump is not usually one for humility when it comes to his business dealings, but yesterday he appeared to step back, if only a little bit. After confirming reports that he is eyeing a potential purchase of Greenland, a semi-autonomous territory of Denmark, on Aug. 18, Trump took to Twitter the next day to address the rumors, and make some jokes about them. His latest viral tweet features a photo of Trump Tower edited onto a Greenland landscape, and it's honestly a little cringeworthy.

“I promise not to do this to Greenland!” he wrote in the Aug. 19 tweet. The tweet included a roughly photoshopped image of a gold Trump Tower shining high along a coastline of island rubble. The word “GREENLAND” — in all-caps — adorns the bottom of the photo.

Trump’s tweet appears to poke fun at earlier reports about his interest in buying Greenland (yes, the entire island of Greenland) from Denmark. The Wall Street Journal first reported the president’s discussions with White House advisors on Aug. 16, noting that they varied “in degrees of seriousness,” with his confidants split on the issue.

It’s unclear how serious he is this time, with an enthusiastic, if comedic, promise not to expand his business into Greenland. The Trump Hotels website listed 11 hotels in countries around the world as of August 2019, and Trump Organization owns buildings in many more, including India and the Philippines. Either way, the tweet is picking up speed and has already garnered over a quarter of a million likes in under 24 hours.

On Aug. 18, Trump waved off the supposed purchase of Greenland as a non-priority, but still acknowledged to reporters that he is interested in what he calls "essentially a large real estate deal." Greenland, which operates as a semi-autonomous territory of Denmark, has a tiny population of only about 57,000, according to the CIA World Factbook. However, the territory is rich in resources like rare-earth metals and has a good strategic position between the U.S. and Russia, per The Guardian. Trump has also previously stirred tensions with fellow NATO member states, including Denmark, with claims that their defense spending falls short relative to that of the United States.

Economic advisor Larry Kudlow discussed the "developing" plan on Aug. 18, when he appeared on Fox News and spoke in favor of the idea.“Greenland is a strategic place up there, and they’ve got a lot of valuable minerals,” Kudlow said about the territory. “I don’t want to predict it now. I just want to say the president, who knows a thing or two about buying real estate, wants to take a look."

Many others, however, are in utter disbelief at the proposal — including Greenlanders. The government has repeatedly emphasized, on its Ministry of Foreign Affairs Twitter account and in an email to the Journal, that the island is not for sale: "We're open for business, not for sale," the tweet said.

“I can’t sell Greenland. Greenland is not Danish,” Danish Prime Minister Mette Frederiksen made clear on Aug. 18, in an interview with Greenlandic newspaper Sermitsiaq. “Greenland is Greenlandic.”

While Trump’s tweet, in all its poorly edited glory, appears to alleviate fears about a greedy business takeover, not all his supporters seem to be on the same page. About an hour earlier, his son and Trump Organization Executive Vice President Eric Trump had posted the same image on Instagram — but with the text, “Greenland in 10 years.”

“I don’t know about you guys but I love the concept of buying Greenland,” he wrote, punctuated with American flag emojis.

The president is expected to travel to Copenhagen, Denmark in early September, but given his remarks those plans have become increasingly uncertain. Trump is scheduled to visit World War II memorial sites and meet with allies and business leaders in Poland and Denmark, according to the White House. However, Frederiksen said her government is still fully planning for his visit, per Bloomberg, despite pushback from Danish politicians and citizens about Trump's comments.

While Greenland probably doesn't have much to fear, Trump might actually be a little bit serious about what's in his shopping cart. A Trump Tower in Greenland isn't likely, but with a little bit of Photoshop, anything is possible.