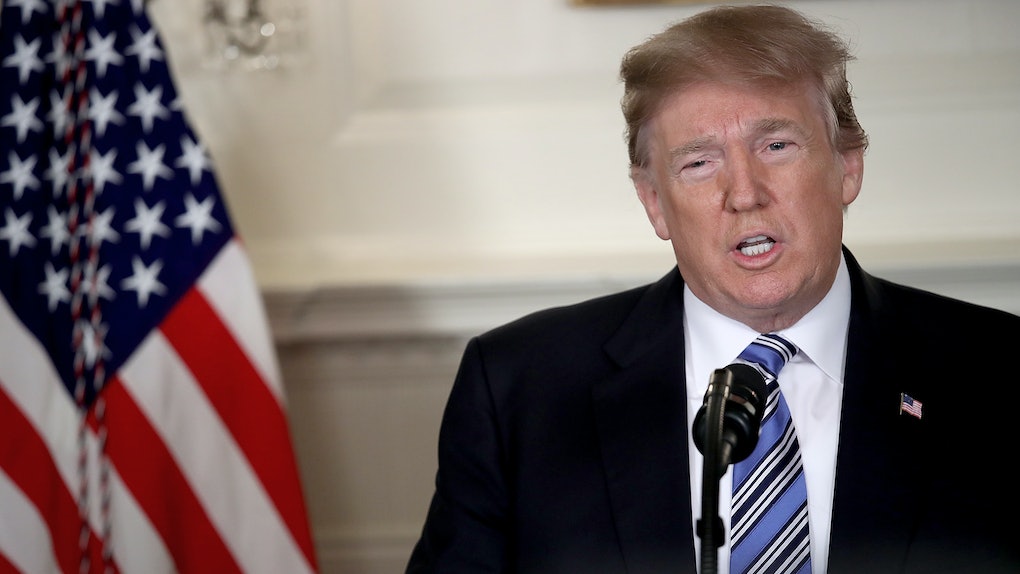 Donald Trump's Statement About The Parkland Anniversary Remembers The Tragedy

Thursday marks one year since the tragic Feb. 14, 2018, shooting of Marjory Stoneman Douglas High School in Parkland, Florida, in which 17 people were killed, and no one has been able to forget. While people ranging from student activists to politicians are taking to social media to express their condolences, Donald Trump's statement about the Parkland anniversary is all about honoring their memory. Gone, but never forgotten.

On Feb. 14, 2019, President Donald Trump released a statement in honor of the Parkland tragedy and the importance of school safety. In the statement, Trump discussed the changes that have occurred in regards to gun safety within the United States over the past year, as well as the impact Parkland had on Americans. A part of the statement read,

One year ago today, a horrific act of violence took the lives of 14 students and 3 educators in Parkland, Florida. On this somber anniversary, we honor their memory and recommit to ensuring the safety of all Americans, especially our Nation’s children. The day after the tragedy in Parkland, I told the Nation that school safety would be a top priority for my Administration. We took immediate action, committing ourselves to a sacred vow to do everything in our power to ensure that evil does not stalk our children on the playgrounds or in the hallways of our Nation’s schools.

He also shared a message of condolence. "Melania and I join all Americans in praying for the continued healing of those in the Parkland community and all communities where lives have been lost to gun violence," he wrote.

In the statement, Trump touts his accomplishments in regards to school safety, such as coordinating listening sessions with students and signing the STOP School Violence Act and Fix NICS Act into law in March 2018. However, when it comes to long-lasting efforts to decrease gun violence, more change has happened on the local level than federal. According to a Dec. 12, 2018, report from Everytown For Gun Safety, 20 states passed gun prevention bills that year in an effort to take on gun reform, which includes protecting domestic abuse victims and expanding background checks.

The Parkland tragedy made a huge impact on the conversation surrounding gun control and gun reform, particularly from younger generations. Following the shooting, Parkland survivors organized the March For Our Lives, a nationwide rally that took place in March 2018. However, this wasn't your standard student-run event. On March 24, 2018, activists, teachers, celebrities, and even Parkland survivors such as David Hogg and Emma González all joined together to attend these marches in an effort to demand stricter gun laws and to decrease gun violence.

It's hard to believe that the Parkland shooting happened a year ago. While this tragedy will stay with numerous Americans for their lifetime, so will these students' efforts to push for gun reform and control. In the meantime, let's use this day as a way to honor those lives lost and the students who are fighting, to make sure this never happens again.