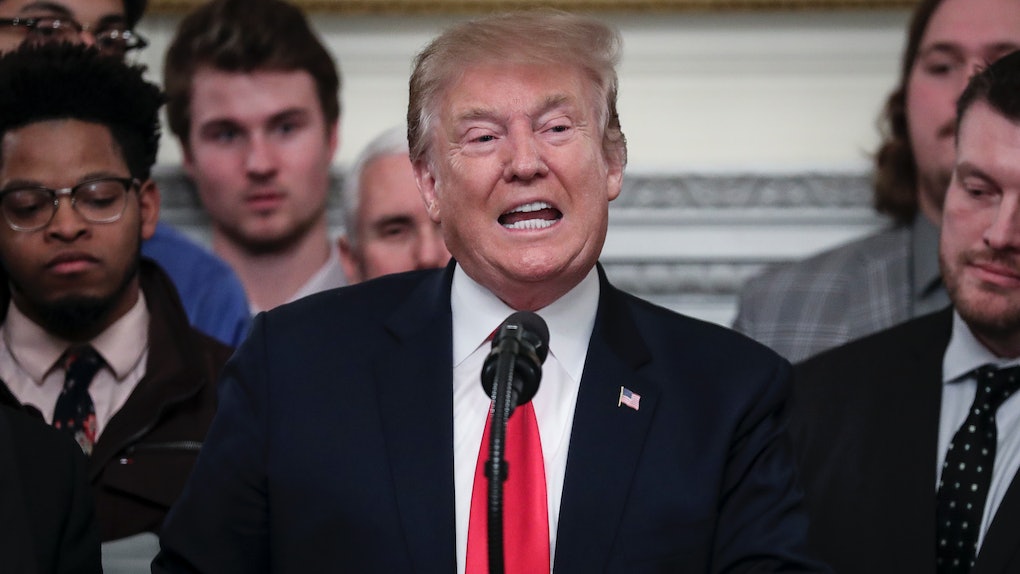 On March 8, the world celebrated yet another International Women's Day, celebrating women and the achievements they've made. Even though it's a holiday for women, sometimes men weigh in to share their thoughts, because, hey, feminism is for everyone. However, President Donald Trump's statement about International Women's Day 2019 is mostly about his own administration, so I don't know how this is going to go over. The White House did not immediately respond to Elite Daily's request for comment on the statement.

"On International Women’s Day, we honor women worldwide for their vital role in shaping and strengthening our communities, families, governments, and businesses," the statement began. "We celebrate their vision, leadership, and courage, and we reaffirm our commitment to promoting equal opportunity for women everywhere."

But beyond the opening, the statement focused more on Trump's administration as opposed to honoring or celebrating women. Instead, it showed the president bragging about his accomplishments. He touted initiatives that "promote women’s global economic empowerment through business, technology, and increased access to capital," including the Canada–United States Council for Advancement of Women Entrepreneurs and Business Leaders, and Entrepreneurs Finance Initiative. Trump also highlighted his administration's efforts to provide tax relief to parents. "Thanks to our economic policies, women’s unemployment in the United States has reached the lowest level in 65 years and more than 2 million more women are working today than in November 2016," Trump wrote.

He concluded his statement by sharing a goal of achieving equality and opportunity for women so that they may "blaze new trails, pursue their dreams, and reach their full potential."

The White House did not immediately respond to Elite Daily's request for comment on the statement's narrow focus, or the omission of specific mention of other issues that affect women globally, such as reproductive rights, equal pay, or access to education.

It appears to be part of a theme for the president. Last year on International Women's Day, Trump also decided to highlight all the achievements he and his administration have made for women during his tenure in the White House. In a public statement, the president talked about wins the administration had made in women's economic empowerment, citing (again) initiatives like the Women Entrepreneurs Finance Initiative and its work to "improve access to capital for women entrepreneurs."

Trump ended that year's statement by saying that through these initiatives, his administrations seeks to "empower women." But while the president's statement focused on empowering women through economic initiatives, it came up a bit short on other topics.

For what it's worth, it's not at all unusual for presidents to talk about their administration's efforts and initiatives in a presidential announcement. In 2016, President Barack Obama used the International Women's Day statement to highlight the Let Girls Learn initiative, which promoted girls' education, and the launch of the U.S. Global Strategy to Empower Adolescent Girls. However, those shoutouts came after a section in which he also highlighted the problems that girls and women still face internationally, including child marriage, economic and political disenfranchisement, abuse, and lack of educational opportunities. Trump's statement, by contrast, was much narrower in focus and mostly stuck to the issue of economic and career empowerment. While certainly a worthy cause, when it comes to empowering women there's a bit more to it.

However, the statement wasn't the only move from the White House recognizing the day. On the morning of March 8, the Trump administration announced that it would be seeking $100 million in the 2020 budget for first daughter Ivanka Trump's Women’s Global Development and Prosperity Initiative (W-GDP). The initiative, according to its website, seeks to help some 50 million women in the developing world by increasing women's workforce participation, supporting women-owned businesses, and removing barriers to women's participation in the labor force.

Hey, progress takes a lot of forms. And there's always more we can be doing.