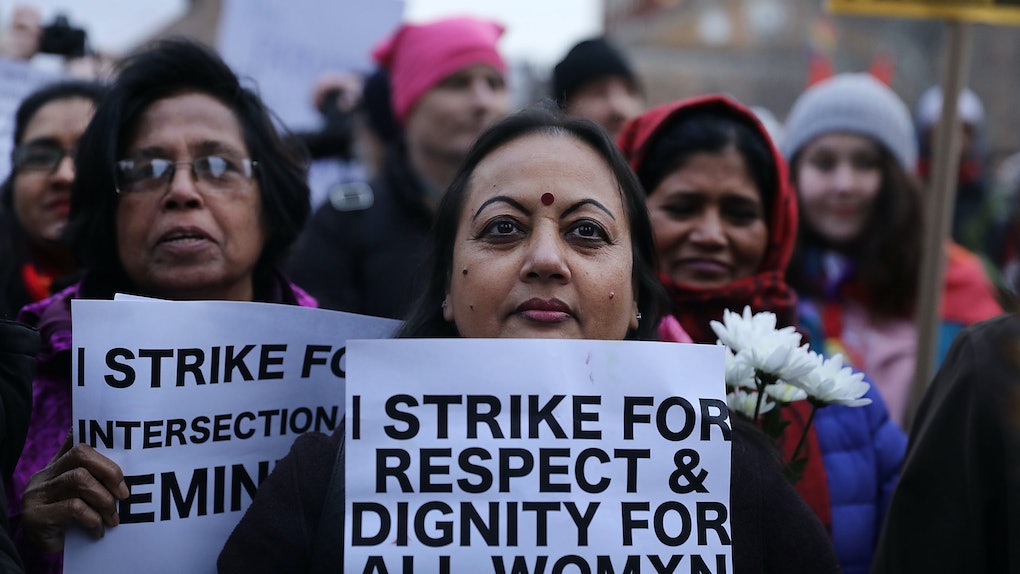 20 Quotes From Women For International Women's Day That'll Inspire You

Being a woman is truly an amazing thing, and I think we can all agree that we're ready to let that be heard on International Women's Day. If you've somehow never heard of the holiday, it's a moment to reflect on the accomplishments of women while also acknowledging the work that has yet to be done. There are usually a bunch of events around the world, from marches to rallies where women share networking opportunities, life lessons, and more. So I mean, it really is an exciting time. If you're interested in getting involved this year, these quotes for International Women's Day will get you inspired AF.

This year the holiday, which falls on March 8, is all about challenging gender biases. According to the International Women's Day website, the theme is #BalanceforBetter, a call-to-action for driving gender balance across the world. "Right now is a great and important time in history to do everything possible to help forge a more gender-balanced world. Women have come a long way, yet there's still more to be achieved," a statement on the site reads.

It's a message that many women have tried to drive home for years, from a former first lady to a renowned poet. Check them out:

1. "No country can ever truly flourish if it stifles the potential of its women and deprives itself of the contributions of half its citizens." - Michelle Obama

Former first lady Michelle Obama has routinely showed up and advocated for the betterment of young girls and women, from creating initiatives to empower women to sharing "girl power" playlists. She said these specific words at a 2014 leadership summit for students in the Mandela Washington Fellowship, per PBS News.

Former British Prime Minister Margaret Thatcher — also known as the “Iron Lady” of British politics — reportedly said this line during a speech at the National Union of Townswomen's Guilds Conference on May 20, 1965, per Canadian newspaper The Globe and Mail. Way to throw down some harsh truths, Maggie.

3. "Of course I am not worried about intimidating men. The type of man who will be intimidated by me is exactly the type of man I have no interest in." - Chimamanda Ngozi Adichie

Unfortunately, there are still some guys out there who are intimidated and put off by women who aren't meek and mousy. But there's no reason to let that deter you from your true self, says author Chimamanda Ngozi Adichie in her 2014 book We Should All Be Feminists.

4. “This body is resilient. It can endure all kinds of things. My body offers me the power of presence. My body is powerful.” - Roxane Gay

If you've ever felt the pressure to look a certain way (same, sis) or have put yourself down because of the way you look, do yourself a favor and stop. As Bad Feminist author Roxane Gay implied in her 2017 book Hunger: A Memoir of (My) Body, you're unique in your own way and the best thing you can do with that is to own it.

The former first lady delivered this famous line on Sept. 5, 1995 while delivering a speech on women's rights issues in Beijing. Though it sounds obvious today, at the time it was a groundbreaking sentiment, and has been commemorated for its unequivocal message in the more than 20 years since.

6. "Women will be hidden no more." - Janelle Monae

Janelle Monae, who (as The Los Angeles Times puts it) "went from cyborg art nerd to queer icon with Dirty Computer," her 2018 Grammy-nominated album, once spoke out about the importance of female visibility, reminding the world that it has been women who birthed some of the biggest names in history. During a speech at the 2017 Women's March, she said, per Bustle:

Is there anything more fitting than the poem Phenomenal Woman from the late and great Maya Angelou? The piece, which is all about being confident in your own skin, reads in part:

But when I start to tell them,

It’s in the reach of my arms,

The span of my hips,

The stride of my step,

The curl of my lips.

This one is from her 2013 HBO documentary Life Is But a Dream and the sentiment appears to have worked well for the Grammy-winning megastar.

9. "We should all have the absolute and inalienable right to define ourselves." - Chelsea Manning

With President Donald Trump trying to implement a transgender military ban and threats against trans people making headlines practically by the day, it's safe to say that the fight for transgender rights is realer than ever. American activist and whistleblower Chelsea Manning has repeatedly weighed in on the topic, expressing her hopes and goals for the future, as she once did with this quote from a 2014 opinion piece she penned for The Guardian:

A doctor, a judge, or a piece of paper shouldn't have the power to tell someone who he or she is. We should all have the absolute and inalienable right to define ourselves. In our own terms and in our languages, and to be able to express our identity and perspectives without fear of consequences or retribution.

Rep. Alexandria Ocasio-Cortez (D-New York) made what appeared to be impossible, possible in 2018, when she upset a long-time incumbent to win a seat in Congress — and she's encouraged others to aim high also. "They'll tell you you're too loud, that you need to wait your turn and ask the right people for permission. Do it anyway," she tweeted in 2018.

Living in a male-dominated world isn't an easy feat, but the important thing is that you give it your best shot, according to actress and advocate Laverne Cox, known for her role as Sophia Burset on Netflix's Orange Is The New Black. In a 2014 interview with MTV News, she said:

Beyond truth and trans, one of the big Ts for me would probably be trying because at the end of the day we can think whatever, but it's like, what are we going to do? Because as long as we're trying, I think that goes a long way. Trying, for me, is more about process than it is about result. I love the word trying. I'm trying. Because it's an emphasis on process and practice and not the result.

12. “When we speak we are afraid our words will not be heard or welcomed. But when we are silent, we are still afraid. So it is better to speak.” - Audre Lorde

It's important to the late writer and activist Audre Lorde that women are vocal and say what they feel, no matter what, as she wrote in her poem A Litany For Survival.

13. “Women will only have true equality when men share with them the responsibility of bringing up the next generation." - Supreme Court Justice Ruth Bader Ginsburg

Hear that, fellas? Supreme Court Justice Ruth Bader Ginsburg has a message for you, too, which she shared in a 2000 interview with ABC correspondent Lynn Sherr.

Phan Thi Kim Phúc, also known as the "Napalm Girl," captured global attention after a heartbreaking picture of her running from an attack during the Vietnam War made headlines. As an adult, she has worked with child victims of war, and in a 2018 interview with Public Radio International (PRI) she shared an empowering message in 2018 for little girls all over. "Please have a dream. Keep your dream alive just like that little girl."

Need I say more? This Tina Fey quote, which she said during a 2008 Saturday Night Live sketch, according to Vox, is an ENTIRE mood.

16. "We need to be a society that enables and empowers women to make the best decisions for themselves." - Dr. Leana Wen

Dr. Leana Wen, who was selected as the president of Planned Parenthood in 2018, shared this quote in an interview with Elle that was released that same year. Wen gets it.

Malala Yousafzai, who made headlines in 2012 after she was targeted and shot by the Taliban for campaigning for girls' rights to attend school, made this comment in her 2014 Nobel Peace Prize speech. "This is where I will begin, but it is not where I will stop. I will continue this fight until I see every child, every child in school," she said. It wasn't the only good quote in the speech, either. She also spoke about her solidarity with other girls and women, saying,

The late transgender activist, who is one of the people credited with starting the famous 1969 Stonewall Riots for LGBTQ+ rights, would reportedly say this in response to questions of whether she was male or female. In fact, the "P" of her middle initial apparently stands for the phrase, according to a New York Times obituary of her. If that's not inspiring, IDK what is.

19. "Ultimately, leadership is about the strength of one's convictions, the ability to endure the punches, and the energy to promote an idea." - Benazir Bhutto

Everyone has their own definitions of "leadership," but this quote from Benazir Bhutto, the first ever female Prime Minister of Pakistan, really nails it, don't you think?

20. "I am a woman with thoughts and questions and sh*t to say. I say if I'm beautiful. I say if I'm strong. You will not determine my story – I will." - Amy Schumer

What would this list be without a quote from funny lady Amy Schumer? The comedian delivered this line during a speech about low confidence, body issues and more at the 2014 Gloria Awards and Gala, per Vulture.

TBH, I couldn't have said any of these better myself. Here's to getting ready for a happy International Women's Day, however you celebrate it!

More like this
The J&J Vaccine's Safety Is Vital — Now Let's Do Birth Control
By Nylah Burton
Little Miss Flint's Activism Is All About Making Kids Like Her Feel Valued
By Ciarra Jones
Will Johnson & Johnson's Vaccine Come Back? It's On The Way
By Rhyma Castillo
Stay up to date