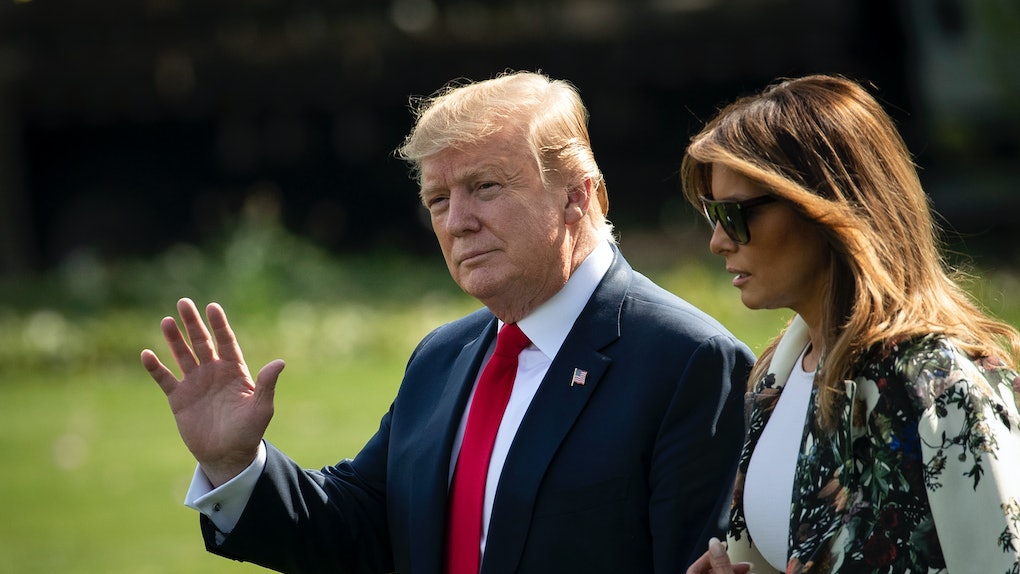 After a series of explosions rocked Sri Lanka on Easter Sunday, leaving 560 injured and more than 200 dead at several churches and high-end hotels, the president is expressing his condolences on Twitter. In addition to sharing his sympathies, Donald Trump's response to the Sri Lanka bombing attacks promises to send help to the country in light of the tragedy.

Shortly after reports surfaced that four churches and three hotels commonly frequented by tourists in the Sri Lankan capital Colombo as well as the cities of Negombo and Batticaloa were targeted by multiple bombers on Sunday, April 21, according to Newsweek, the president took to Twitter to share a message for the victims of the attacks. After apparently mistakenly tweeting that millions were dead in the aftermath of the explosions, per USA Today, Trump took to Twitter to share a corrected message later that morning. He wrote:

138 people have been killed in Sri Lanka, with more that 600 badly injured, in a terrorist attack on churches and hotels. The United States offers heartfelt condolences to the great people of Sri Lanka. We stand ready to help!

The president didn't elaborate on the type of aid that the United States would be providing Sri Lanka in the aftermath of the deadly terrorist attack, which targeted the country's Christian minority in several coordinated bombings on the holy holiday of Easter Sunday. According to CNN, 560 victims have been hospitalized and 207 have been reported killed in conjunction with the tragic explosions at the time of publication.

Countless other world leaders, from Britain's Theresa May to Turkish president Recep Tayyip Erdoğan, also came forth to offer their condolences and sympathies, although Israeli Prime Minister Netanyahu was one of the only ones to also pledge help to the country.

"Israel stands ready to assist the authorities in Sri Lanka at this difficult time," he wrote. "The entire world must unite in the battle against the scourge of terrorism."

From France, President Emmanuel Macron penned a message of solidarity in French, tweeting, "We are deeply saddened by the terrorist attacks against churches and hotels in Sri Lanka. We firmly condemn these odious acts. We stand by the people of Sri Lanka and our thoughts go out to the loved ones of the victims on this Easter Sunday."

As Turkish President Recep Tayyip Erdoğan called the attacks "an assault on all of humanity," British Prime Minister Theresa May vowed, "We must stand together to make sure that no one should ever have to practice their faith in fear."

President Barack Obama also shared his sympathies, writing, "The attacks on tourists and Easter worshippers in Sri Lanka are an attack on humanity. On a day devoted to love, redemption, and renewal, we pray for the victims and stand with the people of Sri Lanka."

Like when the president offered aid in the aftermath of the destruction of Notre Dame, many Twitter users flooded Trump's comments section with reminders about disasters stateside and the continued need for help in Flint, Michigan as well as Puerto Rico.

Wherever you stand on the political spectrum, grieving senseless attacks is a bipartisan issue, and hopefully the president will be shedding more light on his plans for aid when the dust settles. In the meantime, the world will be sending thoughts and prayers to those devastated by the attacks in Sri Lanka.