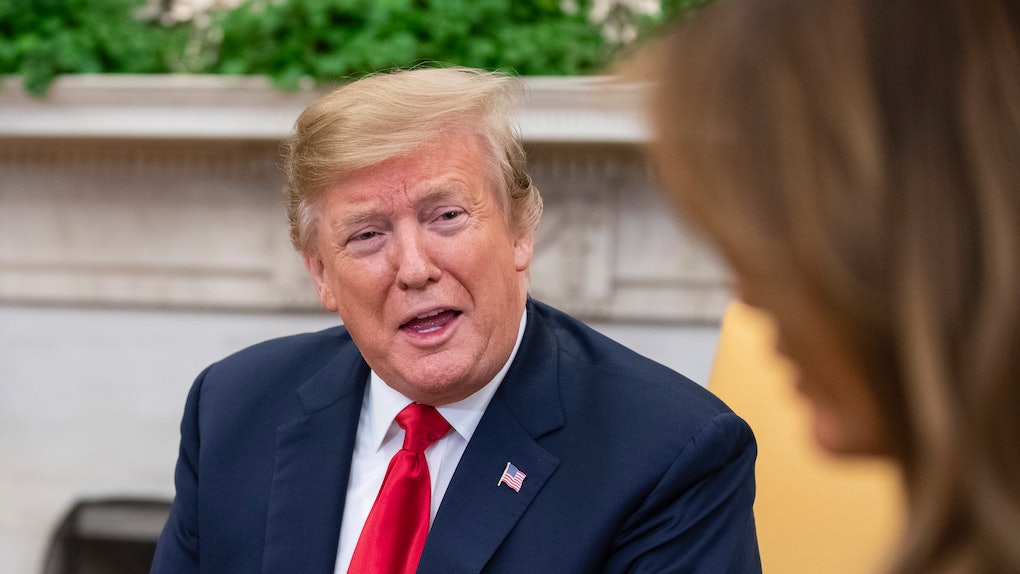 Sometimes, it really takes a lot to ruffle President Donald Trump's feathers. On March 11, House Speaker Nancy Pelosi made a few comments in regards to whether she believes the United States should impeach Trump or not, and it was surprising to say the least. So, it's unsurprising that the president had to retaliate with a few words of his own, but Donald Trump's response to Nancy Pelosi's impeachment comment wasn't what I was expecting.

On March 11 while speaking to The Washington Post in an interview, Pelosi said that she doesn't support trying to impeach President Donald Trump because "he's not worth it." Ouch. Elite Daily reached out to the White House for comment on Pelosi's remark at the time, but did not hear back. As of March 2019, there have been no major moves to impeach the president. Well, in true Trump fashion, the president responded to Pelosi's comment on March 13 via Twitter, in which he thanked the House speaker for her remark and proceeded to defend himself by touting his achievements.

I greatly appreciate Nancy Pelosi’s statement against impeachment, but everyone must remember the minor fact that I never did anything wrong, the Economy and Unemployment are the best ever, Military and Vets are great - and many other successes! How do you impeach....

....a man who is considered by many to be the President with the most successful first two years in history, especially when he has done nothing wrong and impeachment is for “high crimes and misdemeanors”?

Elite Daily reached out to both the White House and Pelosi's team for comment on the exchange, but did not immediately hear back.

In case you're lost on what exactly Trump is referring to, here's a quick recap. During the March 11 interview with the Post, Pelosi shared that she wasn't in support of Trump being impeached, since she thinks it would increase political divisiveness in the country. In addition, she assured the publication that she wouldn't change her mind about her decision unless there was a huge bipartisan agreement on the impeachment. She said,

I’m not for impeachment ... Impeachment is so divisive to the country that unless there’s something so compelling and overwhelming and bipartisan, I don’t think we should go down that path, because it divides the country. And he’s just not worth it.

Given Trump and Pelosi's tense relationship, it looks like even the House speaker has her limits. However, there have been times where it was questionable whether Pelosi wanted Trump impeached or not, such as the time she evaded the question while speaking to Today's Savannah Guthrie on Jan. 3.

Of course, that was in January, and Pelosi had a lot on her plate trying to end the month-long government shutdown that kicked off on Dec. 22, 2018. Since the shutdown officially ended on Jan. 25, Pelosi could have had a slight change of heart. Or perhaps this is her way of ending "revenge politics," something Trump mentioned during his 2019 State of the Union address. I mean, I doubt these two will be going out for happy hour together anytime soon, but Trump can rest easy knowing Pelosi isn't going out of her way to get him impeached.

It doesn't look like the tension between Trump and Pelosi is going to fizzle out anytime soon, but perhaps these two can work it out someday. We'll just have to wait and see.